Twelve of the Most Addictive Drugs 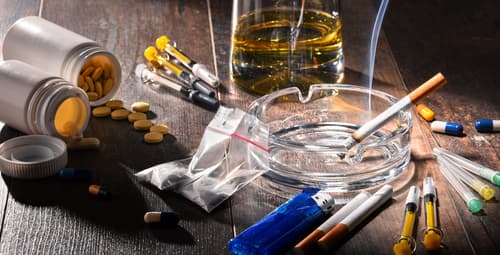 Addiction affects millions of lives in the U.S. It is a chronic disease that frequently includes cycles of relapse and remission, and it is progressive without treatment or participation in recovery work. It is characterized by being unable to consistently abstain from substance use and having cravings, impaired control of behaviors, unhealthy emotional responses, and reduced realization of significant problems.1

It is not known exactly what causes a substance use disorder (SUD). However, factors such as genetics, substance effects, peer influences, emotional distress, mental illness, and outside stressors can contribute to the development of a SUD.2

The disease carries with it a certain shame-laden stigma, and many people do not seek help due to fear of being judged. Using problematic labels—such as calling someone with a SUD an addict—can perpetuate that stigma.3

Repeated use of dangerous drugs can physically change the brain, making it more difficult for an individual to control their behaviors and resist powerful cravings to use drugs.4

Wondering if you or a loved one may have an addiction problem? Find out in less than 5 minutes with our confidential survey.

Amphetamine is a type of central nervous system (CNS) stimulant, giving users a burst of energy or excitability. Amphetamine causes the release of chemical messengers called dopamine and norepinephrine. It can produce many effects, including pleasure, alertness, and improved concentration, as well as dangerous effects like heart problems, paranoia, aggression, nausea, and headache. Long-term use of amphetamine, especially long-term misuse, can cause additional negative consequences such as psychosis, seizures, ulcers, and malnutrition.6

Tolerance can develop, requiring substance users to constantly increase their dosage to get the same effects. They may binge on amphetamine to try to stay high. Binges are often followed by “crashes” where the individual may feel extremely tired, depressed, and anxious and crave to use again.6

Benzodiazepines, such as Valium and Xanax, are widely prescribed to treat anxiety, insomnia, alcohol withdrawal and other conditions. Though they work well for their intended uses, “benzos” can be addictive and difficult to stop.7

The National Institute on Drug Abuse (NIDA) states that benzodiazepines are generally prescribed long term because there is a high risk of tolerance, dependence, and addiction.7 An individual who takes a benzodiazepine for more than 3 to 4 weeks and then abruptly stops it will likely have withdrawal symptoms. Using benzodiazepines long term can result in doses needing to be increased and the underlying condition worsening. Weaning off of benzos should be done gradually under the direction of a medical professional.8

Methadone is a synthetic opioid that can prevent or reduce opioid withdrawal symptoms, reduce opioid cravings, and block the effects of heroin and other opioids.9

Methadone is generally safe and effective if taken as prescribed. However, it can be addictive, so its medical use is carefully controlled.10 Suddenly stopping methadone may cause withdrawal symptoms, such as anxiety, irritability, runny nose, sweating, chills, pain, trouble sleeping, nausea/vomiting, and diarrhea.11

Scientific data shows that tobacco use is the leading preventable cause of preventable death in the United States. It is estimated that more than 16 million people in the U.S. have a disease that is caused by smoking.12

Though legal, alcohol acts as a CNS depressant, meaning it relaxes, reduces anxiety, and impairs judgment, as well as other effects.14,15 When someone consumes alcohol, the brain releases dopamine and endorphins, which influence motivation and the sensation of pain.

Over time, people who drink regularly need to consume more and more alcohol in order to get the same effects. These individuals can become dependent on alcohol, where if they stop drinking they develop withdrawal symptoms.16 Alcohol withdrawal can be life-threatening.17

Cocaine is a stimulant drug that causes dangerous physical effects such as euphoria, increased alertness and energy, rapid heart rate, and increased blood pressure. It can even lead to heart attacks, seizures, strokes, and/or death. Many people use cocaine in binges, where they repeatedly take the drug in a short period of time to stay high. Repeated use of cocaine can lead to addiction. Cocaine increases the amount of available dopamine in the brain by preventing the dopamine from being recycled back into cells. This leads the brain to adapt to the high levels and become less sensitive to dopamine, and more and more cocaine is needed to produce the same effects and prevent withdrawal.18

Made from a process involving powder cocaine and either ammonia or baking soda, crack is a version of cocaine. The key difference is that crack is usually smoked. Crack is more potent than powder cocaine, and smoking crack causes the high to be almost immediate and intense. Crack’s high is extremely short, usually around 15 minutes, often causing the user to repeatedly smoke it to stay high. Withdrawal symptoms can include immense fatigue, depression, agitation, and anxiety, and strong cravings—all of which can drive a person to keep using the drug.20

Heroin is a very addictive opioid drug. Heroin can cause euphoria, altered sensation of pain, nausea/vomiting, itching, dry mouth, skin flushing, decreased consciousness, and clouded thinking. Individuals who use heroin often develop tolerance, where they need more heroin to get the same effects. Long-term use of heroin can cause many problems, such as trouble sleeping, constipation, liver disease, kidney disease, lung problems, infection of the heart valves/lining, and more. Overdosing on heroin can be fatal.21

The route of administration may impact heroin dependence. A study found that people who inject heroin have more severe dependence than those who smoked the drug.22 Individuals who suddenly stop (or notably decrease) regular use of opioids can go through withdrawal. Opioid withdrawal can be extremely uncomfortable but is generally not life threatening. However, individuals may relapse in an effort to relieve withdrawal symptoms, and they can easily overdose because withdrawal decreases their tolerance. Most fatal opioid overdoses happen in people who recently detoxed.23

Barbiturates are a class of prescription medications. They are a type of CNS depressant, meaning that they can slow activity in the brain.24 Barbiturates cause drowsiness and relaxation, as well as other possible side effects, and they can be addictive. Repeated use can rapidly lead to tolerance to the mood effects of barbiturates, but tolerance to the potentially fatal effects takes longer to develop. Thus, regular use increases the risk of poisoning and can be deadly. Not only can barbiturate overdose be lethal, but barbiturate withdrawal can also be life-threatening. Thus, individuals should not start, stop, increase, or decrease barbiturate use without the direction of a medical professional.25

Buprenorphine, like methadone, can prevent or reduce opioid withdrawal symptoms, reduce opioid cravings, and block the effects of other opioids.26,27 However, buprenorphine is a partial opioid agonist, meaning that its effects are less powerful than full agonists like methadone or heroin. Buprenorphine also has a “ceiling effect” where, starting at moderate doses, the effects of the drug level off and do not increase with dose increases, which decreases the risk of side effects, misuse, and dependency. Buprenorphine is generally safe and effective if taken as prescribed. However, buprenorphine can be misused because of its opioid effects.26 Suddenly stopping buprenorphine may cause withdrawal symptoms.27

Ketamine is an anesthetic that can cause dissociation and/or hallucinations, as well as pain relief, sedation, memory loss, immobility, agitation, depression, trouble thinking, increased blood pressure and heart rate, nausea, and loss of consciousness. Because it has medical uses but also abuse potential, it is a Schedule III substance. Ketamine is considered a “club drug” because it is popular at “raves” and dance clubs. Overdosing on ketamine can be dangerous.28

Cannabis (also referred to as marijuana) contains THC, a mind-altering chemical. Marijuana is legal in some states for medical uses and/or recreational use. It can cause many effects, such as feeling high, mood changes, altered senses, change in perception of time, and trouble thinking. In high doses, it may cause delusions, hallucinations, and psychosis. Long-term use of marijuana can impact brain development and cause problems with breathing, nausea and vomiting, and more. Chronic use may result in addiction, and individuals who start using marijuana before they are eighteen are even more likely to develop a cannabis use disorder. Stopping marijuana may cause withdrawal symptoms.29

4-MTA is a synthetic derivative of amphetamine that is typically sold as tablets. Its effects are similar to those of MDMA. Users may feel peaceful, calm, and/or more empathetic, and they may have a decreased need for sleep. Possible negative effects include sweating, nausea, elevated body temperature, confusion, intoxication, dizziness, and memory loss.30

Because the aforementioned 2007 study only had the experts score twenty substances, countless other substances were not reviewed. For instance, methamphetamine and prescription opioids in general can each be highly addictive.

Methamphetamine is a stimulant that is typically used as a powder or pill. Crystal meth is a type of meth that can resemble glass or shiny, bluish-white rocks. Methamphetamine’s high starts quickly and ends quickly, so individuals often use it in binges, where they repeatedly use it in a short period of time to stay high. Other effects of meth can include increased wakefulness, fast breathing, reduced appetite, increased activity, irregular and/or fast heartbeat, raised blood pressure, and elevated body temperature. Injecting meth (or any drug) increases the risk of diseases like HIV, hepatitis B, and hepatitis C. Long-term use of meth may cause serious dental issues, significant weight loss, skin sores from scratching, confusion, trouble sleeping, anxiety, paranoia, violence, and hallucinations. Overdosing on methamphetamine can be fatal. An individual who stops using meth may experience withdrawal symptoms.31

Repeatedly misusing prescription opioids can result in a substance use disorder. Overdosing on opioids can be deadly.32 As mentioned previously, opioid withdrawal can be extremely unpleasant and may lead to relapse, which can easily result in a fatal overdose.23

If you think you or someone else may be struggling with addiction, reach out and get help. There are effective treatments available. If someone has overdosed or if it is another emergency, call 911.