Adderall is a combination of amphetamine and dextroamphetamine that is used primarily to treat the symptoms of attention-deficit hyperactivity disorder (ADHD). It has benefits with sleep disorders and reported, off-label utility in managing some forms of severe depression as well.

This drug is classified as a central nervous system stimulant, which means it speeds up and heightens certain bodily processes. Adderall is an oral medication prescribed by a physician who will normally start a patient on a low dose to avoid unwanted side effects, gradually increasing it as necessary. 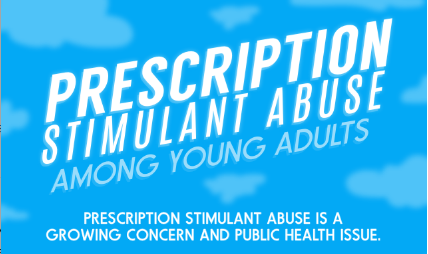 Continued use can lead to more severe effects. With long-term abuse or abuse that involves high doses of Adderall, the symptoms can compound and lead to even more dangerous effects. These effects include:

If you notice any of the above in yourself or another, seek help or consult a doctor immediately.

Overdosing on a stimulant medication like Adderall can lead to grave health consequences. If you suspect an Adderall overdose, call 911 or your local emergency services. Some symptoms of overdose include:

Long-term Adderall abuse can lead to the hallmark signs of a substance use disorder. These problems are most likely to occur when the drug is taken above and beyond prescribed parameters. Some of the most concerning issues that may arise are: 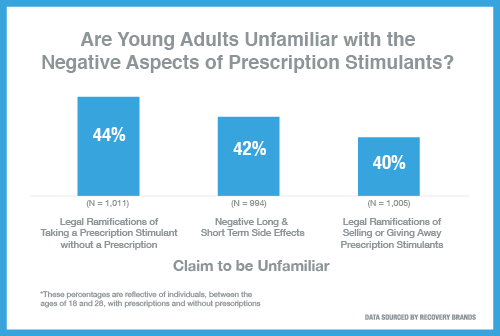 Some of the most concerning issues that may arise are:

Patients are more likely to overdose and to cause harm to their bodies when the drug is misused. A major concern for many people that abuse Adderall over an extended period is the risk of cardiovascular issues. Since Adderall is a stimulant, it plays a major role in:

These factors combined are linked to serious medical issues like stroke and/or cardiac arrest.

The Dangers of Mixing Adderall with Alcohol

Another risk of overdose associated with Adderall is when the substance is mixed with other substances like alcohol. Adderall has the ability to mask certain indicators of intoxication that people would otherwise use to slow or stop their consumption. If these signs go unnoticed, the user is at risk of continued drinking—potentially leading to alcohol poisoning, coma, or death.

Knowing the facts about Adderall can help prevent needing treatment by preventing addiction.

However, if you or someone you know needs treatment for Adderall addiction, rehab centers can help.

Rehabilitation centers can help by providing detoxification services and will aid in treating patients for psychological addictions as well as physical.

Professional services like inpatient or outpatient treatment are often necessary for those struggling with Adderall abuse. Excessive stimulant exposure over time – and the resultant increase in dopamine activity – can cause subtle brain changes that reinforce drug behavior to the point of being quite difficult to reverse on one’s own.

Once the patient stops abusing Adderall, the brain will experience a strong desire for more dopamine leading to cravings for Adderall. Other common withdrawal symptoms of Adderall include:

Treatment options will vary according to the level of abuse present. Inpatient, outpatient, long-term residential programs offering a combination of individual and group therapy to treat the addiction and underlying mental health issues.

It’s important to note that treatment centers and their services can vary widely, so it’s essential to interview the facility to find out:

Adderall abuse by teens and young adults is common because stress and time management issues at college make the perceived effects of the drug more appealing.According to SAMHSA’s National Survey on Drug Use and Health, also called (NSDUH), in 2015, 425,000 teens and adolescents between the ages of 12 and 17 reported misuse of prescription amphetamine products like Adderall. This number jumps to approximately 2.5 million among young adults age 18 to 25, which is almost 5 times higher.

Per SAMHSA’s 2009 NSHUH Report, young adults using Adderall for recreational purposes have also been recognized as being:

The Problem of Prescription Diversion

A lot of young adults obtain ADHD medications even though they don’t have a prescription. This is a far-reaching problem that can lead to rampant misuse. But where do these people in their 20s get ahold of the medications?

According to a survey conducted by Recovery Brands in 2016, a shocking 63% of young individuals 18 to 28 years old get their hands on their prescription stimulants by means of their friends. More than 20% acquire them through a member of their family, while almost 20% get them via other students, and less than 15% retrieve them from an actual drug dealer.

People with doctor approval for these medications are advised to track their doctor-prescribed stimulant medications in order to protect vulnerable people from falling prey to addiction. 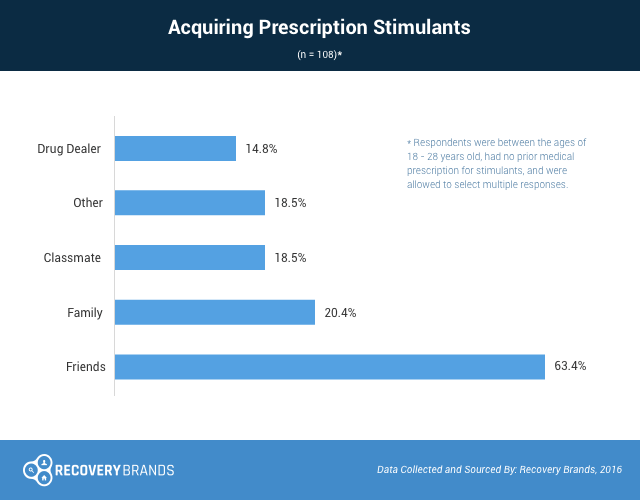 If you help your child learn about the dangers of Adderall abuse and better ways to manage time, activities, homework and other school-related items, he or she will be less likely to need the drug to stave off sleep.

Reports show that students that abuse Adderall are more likely to have lower grades than students that do not abuse the substance.

A crucial part of prevention is to inform young adults that there is no association documented between Adderall abuse and increased study abilities or intelligence. In actuality, reports show that students that abuse Adderall are more likely to have lower grades than students that do not abuse the substance.

Remember, the more you speak with your child about the dangers of drug use, the less likely he will be to abuse drugs. It’s especially important to emphasize the dangers of prescription drugs. Many teens feel that these drugs are not as dangerous as illicit drugs and take them without as much concern.

To learn more, visit our article, History and Statistics of “Study Drugs”.