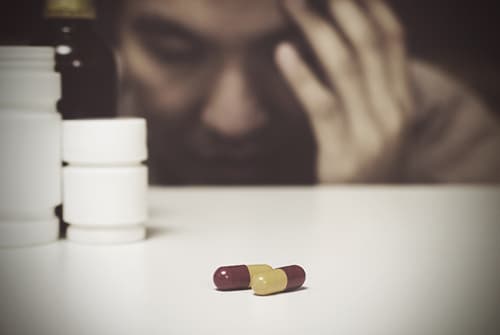 The previous edition of the Diagnostic and Statistical Manual of Mental Disorders (DSM-IV), a diagnostic reference text that many in the health care field use to help typify and define mental health issues such as substance abuse, included separate categories for the concepts of both drug dependence and drug abuse.

Drug dependence was defined as a maladaptive pattern of drug use, marked by the development of drug tolerance and the existence of withdrawal effects as well as having a persistent desire but inability to mitigate one’s drug use.

What is Drug Dependence?

At a basic level, when an individual is experiencing drug dependence, it means that the individual feels he needs to use drugs in order to function. There are many people suffering from chronic pain that have become dependent on their medication, but are not actually abusing it. Unfortunately, the more common scenario is the individual that has become dependent on a medication due to drug abuse. Drug dependence can occur with prescription drugs, illicit drugs, or alcohol.

Today’s society is laden with persons dealing with drug dependency issues. Whether in the midst of drug dependency or drug addiction, family and friends are usually affected. Treatment for drug dependence in a qualified drug and alcohol rehab center is the best way for all to recover physically, psychologically, socially and spiritually.

Drug dependency has many contributing causes that are categorized as:

You can take your life back from addiction.
Call now to get help.

Why can’t many people with drug dependencies quit on their own? Many struggling with drug abuse and addiction are under the belief, at least to begin with, that simply asserting one’s willpower can lead to a decrease in drug use. A lot of these people try, at least once, to stop on their own – without the assistance of anyone. Very few are successful, however, especially in the long-term, and it’s not surprising that this is the case.

The phenomenon of drug dependency occurs, at least in part, as a result of changes in the brain. New synaptic pathways or neural connections have been created which reinforce the desire to continue using the drug. These changes can persist long after the last instance of drug use. So, even if one is successful in quitting at the outset, the changes made to the brain during the period of active drug use can, essentially, sabotage efforts to resist the impulse to use drugs again. The inability to cut down or quit using despite one’s best efforts to do so is a diagnostic hallmark of substance dependency and drug addiction.

Awareness of a strong biological component to dependency and addiction helps to understand why it is so hard for those suffering from drug addiction to quit on their own. Compounding the difficulty is the fact that numerous forms of life stressors (work, social relationships, financial, etc.) and situational triggers (sights, locations and people associated with previous drug behavior) can all serve to stimulate the ‘re-wired’ brain pathways and lead to powerful cravings for the drug.

Despite the biological reinforcement factors and stubbornness of a drug dependency, there is hope. Addiction treatment research indicates that individuals who dedicate themselves by actively participating in treatment programs can do much to undo the negative changes that have occurred and achieve good recovery outcomes.

For many types of substances, when the user discontinues their drug use, withdrawal symptoms emerge. These vary, and can range from moderate discomfort to severe and even life-threatening effects. In order to receive the best care possible, drug dependent individuals should seek proper treatment in a licensed and accredited drug addiction treatment center.

There are proven detox treatments under board certified medical professional care that are designed to manage the withdrawal symptoms associated with drug dependency in order to decrease or eliminate them altogether. It is advisable that anyone with a long-standing drug dependency undergo a supervised detox under the watch of a professional.

In an inpatient rehab center, various methods of addiction counseling and treatment will follow the acute period of drug detox. This period of treatment can last from 30 – 90 days, or longer if required. One of the benefits of treatment centers for drug dependency is their commitment to aftercare relapse prevention programs.

Treatment centers analyze the drug dependency issues a person has prior to discharge and design individualized treatment plans to assist in keeping each patient clean and sober. Whatever recovery tools they have learned in drug dependency treatment, become necessary to use after treatment. The goal is to utilize everything learned in treatment to enjoy a long recovery.

For advice on finding the best treatment for drug dependency, you can contact American Addiction Centers (AAC) for free 24/7 at . All calls are confidential. You can also contact free narcotics and drug abuse hotline numbers.