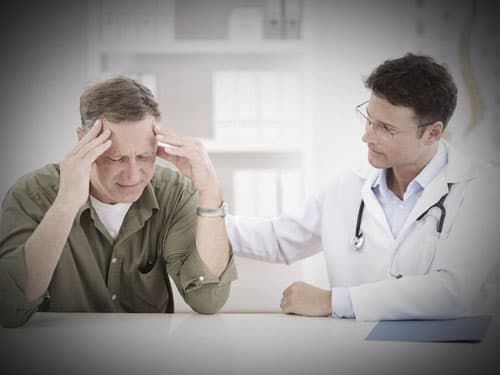 Despite the declines in the death rate over the last 20 years, cancer continues to be one of the most prevalent public health issues in the US. According to the National Cancer Institute 1:

Risk factors for cancer are wide-ranging. Certain factors like age, family history, and hormonal fluctuations are outside of individual control. However, there are numerous other risk factors like diet and sun exposure that can be controlled, and a major preventable contributor to cancer is substance abuse 2.

The risk does not end with lung cancer, however. Tobacco use has been linked to cancers of the 3, 4. 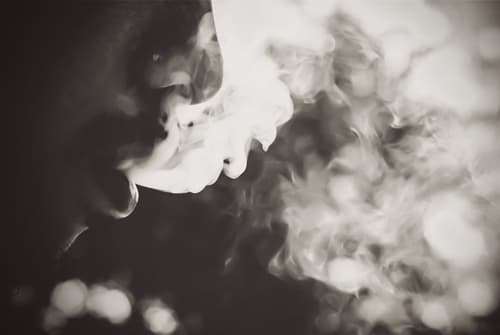 Tobacco smoke contains hundreds of harmful chemicals, and about 70 of them are known to cause cancer. Once ingested, the toxic effects of tobacco smoke can potentially damage every organ system in the body, which explains the vast variety of cancers triggered by use of the substance 4.

Because of this, there is no safe level of smoking, and there is no safe method of using tobacco products. Cigarettes are not the only method to confer these health dangers. You are also at risk if you use 4:

Even electronic cigarettes have been found by some tests to have cancer-causing chemicals in the aerosol 22.

Fortunately, current smokers can significantly lower their risk for cancer by quitting. Cancer risk will significantly decrease within a few years after the last use 4.

The risk of developing cancer from drinking alcohol increases with:

Heavy alcohol use is linked to higher levels of 5,6:

In the body, heavy use of alcohol is known to cause cancer in several ways including the following 5, 6: 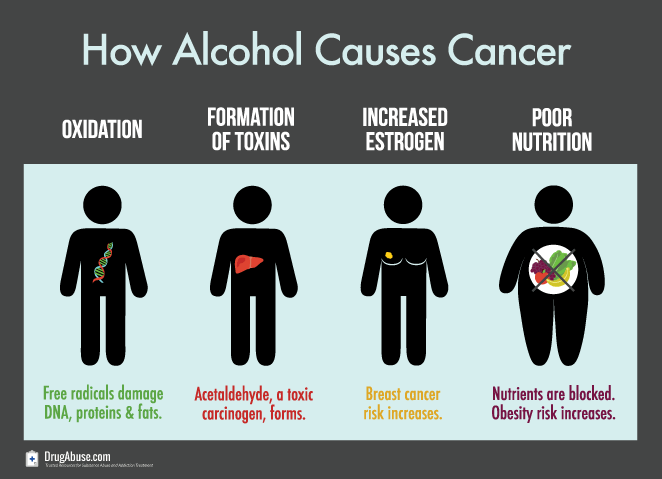 While both tobacco and alcohol individually raise cancer risk, smoking and drinking in combination heightens the risk exponentially. This is especially true for cancers of the:

According to the American Cancer Society, alcohol functions as a solvent that enables other harmful toxins like tobacco smoke to more easily enter the cells in the upper digestive tract. This has been discussed as a possible explanation for why drinking and smoking in combination appears to significantly raise the risk of mouth and throat cancers. Additionally, alcohol makes it more difficult for the body to rid itself of certain toxins 6.

Though marijuana is commonly seen as safe and is increasingly legalized, it may be a factor in the development of certain cancers. There have been reports of increased incidents of cancers of the lungs, head, neck, and respiratory tract as a result of carcinogens and toxins 7.

Marijuana use also increases the risk of testicular cancer, especially in younger people. The evidence shows that males who smoke marijuana during adolescence have greater chances of developing a specific type of testicular cancer called non-seminomatous germ cell tumor 8. Studies indicate that marijuana smoke may contain a testicular carcinogen 21.

Anabolic steroids are a class of substances with androgenic, or testosterone-like effects, frequently used by those seeking to increase their muscle mass or improve performance in a physical activity or sport. Steroids also are linked to a number of unwanted effects including cancer.

Since the liver is the primary organ responsible for processing and clearing steroids from the body, this organ is subjected to damage in the form of 9:

With the hormonal changes triggered by steroid use, the formation of other cancers becomes more probable. Your health can’t wait. Call to get help for addiction now.

Khat is a plant native to Eastern Africa and the Arabian Peninsula and used by 10 million people worldwide. In the US, the drug is used predominantly by people from or with cultural connections to countries like Somalia 12.

The plant can be chewed in a way similar to tobacco or brewed into a tea. Khat has been linked to a number of physical and mental health problems including cancer of the mouth. It appears that the risk increases when khat use is combined with alcohol and/or tobacco 13. 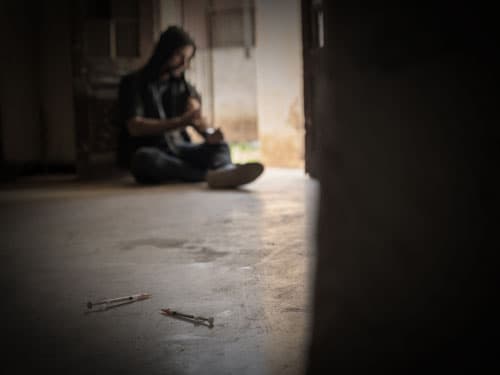 The above shows the specific substances of abuse that have been found to increase a user’s susceptibility to cancer. However, there are other factors that may also raise your risk if you’re abusing drugs.

The method of use, the mixture, or the manufacturing can indirectly expose the user and others to increased cancer risks.

Most substances of abuse can be ingested in a variety of ways. Smoking, snorting, and swallowing all carry their own set of risks. One method of delivery that causes increased risk is injection.

Hepatitis B and hepatitis C are regularly transferred through sharing needles 14. This practice can spread disease by increasing the person’s contact with blood of infected individuals.

Without treatment, hepatitis can progress to cirrhosis and a particular form of liver cancer called hepatocellular carcinoma (HCC). Liver cancer causes more than 20,000 deaths each year in the US alone 14.

Toxins involved in the manufacturing or illicit distribution of certain drugs can increase cancer risk for those who handle the chemicals. There are several examples of this, including:

The list of reasons to avoid abusing alcohol and other substances is long. The risk of cancer is rarely the first thing that comes to mind when you think of the perils of drug use; however, it is a major risk factor for several substances of abuse.

To learn about treatment options to end use of alcohol, tobacco, or any other substance, call .