The Deadly and Costly Consequences of DUIs 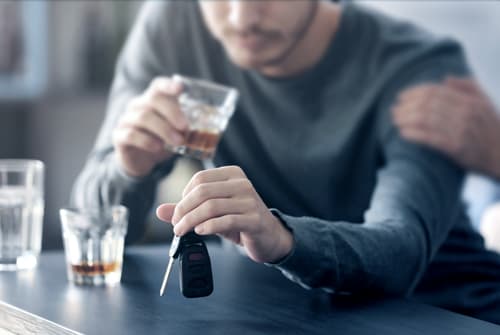 It all starts with the thought, “I’m fine.” Maybe that person goes to a party at a friend’s house and has a few beers or glasses of wine at dinner. The guest says goodbye and climbs into the driver’s seat to head home. What happens next can have costly, if not deadly consequences. 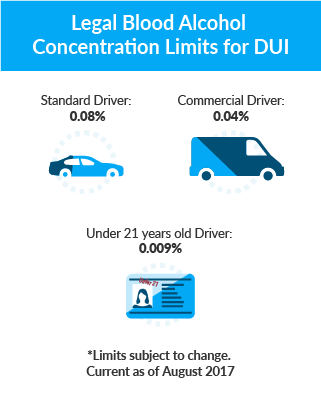 Alcohol has infiltrated our societal norms to the point that many people don’t even think twice before drinking and driving. In fact, nearly 2% of adults in the United States have reported driving after consuming too much alcohol.1

The reality is that operating a motor vehicle requires the driver to be fully attentive, alert and able to react quickly to changes in the environment. However, alcohol impairs coordination, reaction time, decision-making and vision—all of which increase the risk of adverse events, such as car accidents and death.

Being convicted of a DUI can negatively impact your life in a number of ways. It can lead to:

What Is a DUI?

An impaired driver is someone who is operating a vehicle while under the influence of alcohol or mind-altering drugs. It can also refer to a driver who is negatively impacted by excessive sleepiness, distractions such as cell phone use, or having a medical condition that affects the ability to drive. Impaired drivers are responsible for more than 50% of all traffic accidents.2

At low levels of alcohol consumption over a responsible period of time, a person’s ability to safely drive a car isn’t hindered. When someone drinks alcohol in more than moderate doses, however, it can impair his or her ability to make decisions and can negatively affect the ability to operate a motor vehicle.

An individual can be arrested for driving under the influence (DUI) or driving while impaired (DWI) if his or her blood alcohol concentration (BAC) is .08% or higher.3 A commercial driver must not exceed .04%, and there is a zero-tolerance policy for people under the age of 21 years.

Number of Arrests and Incarcerations

More than 1.1 million people were arrested for drunk driving in 2014. While this number may seem high, it represents only about 1% of those who have reported driving under the influence of alcohol.4 Since many drunk drivers don’t experience any detrimental consequences for their actions, it can reinforce their behaviors and create the false belief that driving while impaired is okay.

Death Rates in the U.S. from Drunk Drivers 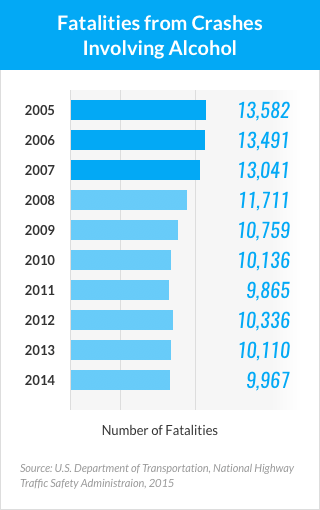 Driving drunk doesn’t just negatively impact the driver. The second an impaired driver gets behind the wheel, he or she puts the lives of many others in their hands. In the United States, there are 28 people who die every day in accidents caused by drunk drivers.4

Naturally, not all traffic accidents involve alcohol. Many driving fatalities are the result of distraction, speeding, weather conditions and animals—as well as many other factors.

Out of all traffic fatalities in 2014, however, nearly 1/3 of those did involve alcohol.4 And up to 20% of traffic deaths in children 14 years of age and younger were caused by a drunk driver.

How Many People Are Killed Each Year from Drunk Drivers?

In 2014, there were nearly 10,000 people who died in car accidents involving an alcohol-impaired driver.4 Thankfully, the amount of people ages 12 and older who drink and drive has been steadily decreasing since 2002.5 In 2002, 14.2% of this age group were reported as being involved in alcohol-impaired driving. That figure decreased to just under 11% in 2013.

The age group with the highest rates of drunk driving was shown to be the 21-34-year-old age group. It was also found that 209 children under the age of 15 years died as a result of impaired driving in 2014.4 Of the children who died, more than 50% were riding in the car with the impaired driver.

The discrepancy of deaths between genders is significant. Men are far more likely to die in alcohol-related car crashes than women. In fact, in 2012, about 4 times more men died than women in accidents involving drunk drivers.7

In 2014, 1,511 passengers who were riding with an alcohol-impaired driver died as a result of a car accident.6 This figure amounts to 15% of the overall deaths caused by drunk driving. 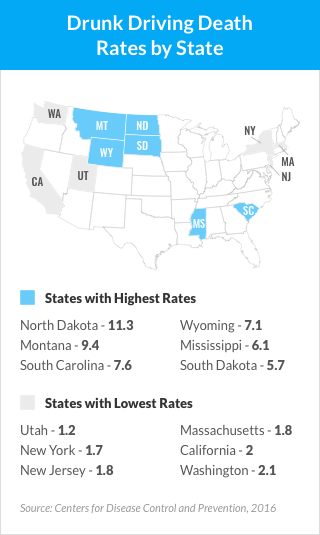 Some states experience more deaths from drunk driving than others. The states with the highest 2012 death rates per 100,000 people are:8

Conversely, the states with the lowest 2012 death rates include:8

Who Gets Killed the Most? 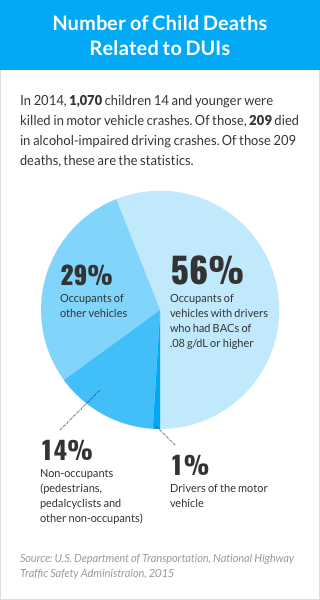 Drunk driving tends to kill some types of individuals more than others.

It should come as no surprise that those who have a history of driving under the influence of alcohol are more likely to get killed in a car crash than those who don’t. Intoxicated drivers who die in a motor vehicle accident are 7 times more likely to have been arrested for a DUI in the past than those who were sober.4

Young adults also have an increased risk for being involved in fatal crashes. In 2014, 30% of those who died in alcohol-related car crashes were between 21 and 24 years old—and 29% were between 25 and 34 years of age.4

Which States Have the Most DUIs?

California had the highest number of DUI arrests in 2014 with over 155,000 arrests, while Alabama had as little as 162.9 Getting convicted of a DUI is a serious and criminal offense. Driving under the influence can have harmful and even fatal ramifications.

In addition to risking your life and the lives of those around you, you could also face license suspension, fines, mandated addiction treatment and jail time. The fees listed in the chart vary largely depending on your age, number of previous offenses, bodily harm inflicted and blood alcohol concentration level.3 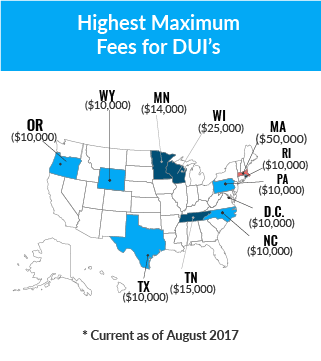 As you can see, drinking and driving simply isn’t worth the risk. And financial hardship is only one of the negative results of getting behind the wheel after having too much to drink. Many people also wind up serving jail time as a result of this one bad decision to drink and drive. If you’re planning on drinking, make arrangements to have a designated driver or call a taxi. The extra planning or money spent is well worth your life and the lives of others.

Alcohol’s Effects on Your Driving

How much alcohol does it take to affect your driving? Even as little as two drinks could potentially have an impact on your driving safety:

One standard drink is generally equal to the following:23 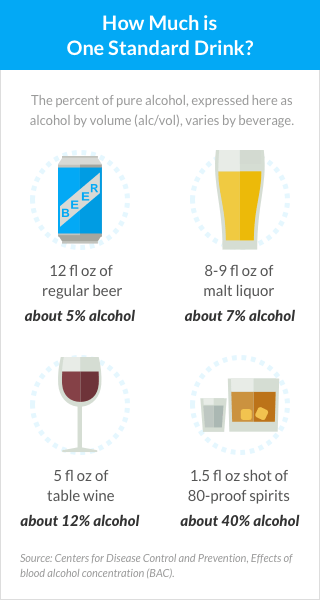 In the early 20th century, shortly after cars started to become more widely available, it became apparent that driving under the influence was hazardous and potentially fatal. DUI laws were then created in order to decrease impaired driving and the dangers associated with it.

These laws weren’t implemented all at once across the country, however. New York was the frontrunner for adopting these laws. Below is a timeline of the U.S. laws against drunk driving:24

The adoption of DUI laws and subsequent changes to the legal limit have proven to be beneficial in decreasing the number of fatalities in people who have a BAC of .08 or higher.26

One sign that someone has an addiction to alcohol is that he or she repeatedly drinks alcohol in dangerous situations—such as before driving a car, for example.27 Some states require that those convicted of a DUI attend alcohol education classes or treatment for alcohol abuse. Research has suggested that those who obtain treatment for alcoholism are less likely to relapse than those who achieve sobriety on their own without any additional recovery services.28

One study examined the length of abstinence among alcoholics—as well as among drug addicts—and found that the longer someone remained abstinent, the lower the risk of relapse. Historically, statistics have indicated that—of the recovering alcoholics and addicts that are able to refrain from drinking or using drugs for an entire year—less than 50% will relapse.29 Moreover, once recovering addicts achieve 5 years of abstinence, the relapse rate drops to below 15%.

Getting chronic drunk drivers the help they need in order to recover from alcohol dependence can help decrease problematic drinking, hazardous behaviors and potential fatalities that result from alcohol-impaired driving.

How to Prevent Drunk Driving 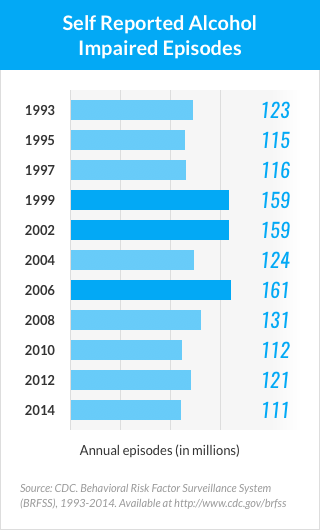 In addition to the strict and severe penalties associated with driving under the influence, there are many other preventative tactics that can help reduce alcohol-impaired individuals from getting behind the wheel.

You are probably know that getting convicted of a DUI can cause your driver’s license to be suspended, which means you cannot drive until your suspension period is up.30 And driving without a license can lead to even more severe legal penalties.

Sobriety checkpoints are designated locations where police officers evaluate drivers for intoxication and impairment. The knowledge of these traffic stops helps to discourage drunk driving and decreases crashes involving alcohol by about 9%.4

Many schools have begun to implement educational programs that teach students about the dangers of riding with drunk drivers in an attempt to decrease poor decision-making.30

Drivers who have been arrested for driving while under the influence may get alcohol ignition devices installed in their cars.4 These devices help deter drunk driving behaviors by preventing the driver from operating the vehicle if his or her blood alcohol concentration is above a given safety limit.

Find Help for Your Alcohol Addiction

If you or someone you know is suffering from an addiction to alcohol, don’t hesitate to seek help. Call our helpline at to speak to a treatment support specialist about different recovery programs. There is someone available to talk to you 24 hours a day, 7 days a week.

We have more informational guides and pages available which are written by experts in related fields. Other topics include opioid addiction, using drugs and alcohol if you have diabetes, and the effects that drugs and alcohol have on body weight. 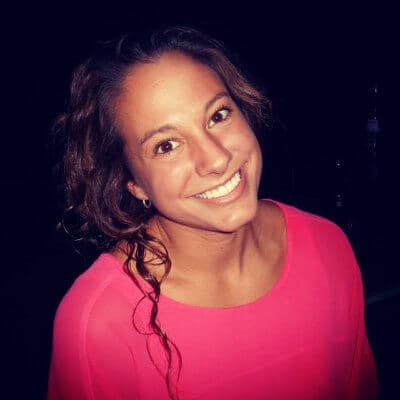