When you find out you are pregnant, one of the first things your doctor will discuss with you is how you can best take care of yourself during those 9 months, as there are many factors that can affect your health and the health of your baby. A healthy pregnancy will be largely influenced by good eating practices and staying hydrated, however all substances consumed will play a role, as most of what you put into your body will ultimately pass through the placental barrier to reach the developing fetus. Substances considered harmful or potentially harmful for your baby are deemed teratogens—these can damage the developing embryo and potentially cause birth defects.

Alcohol is a well-known teratogen for the developing fetus, and you are taking a risk if you drink any type of alcohol (beer, wine, or liquor), in any amount, at any time during your pregnancy.

If you consume alcohol during pregnancy, especially to excess, there is a chance your baby will suffer a number of physical, mental, emotional, behavioral, or developmental consequences that may be lifelong and irreversible. This may occur even before you’re aware of your pregnancy, as most women don’t know they’re pregnant until 4-6 weeks along 1. The more you drink in terms of both frequency and quantity, the more likely it is that your baby will be subjected to these effects.

What Are Fetal Alcohol Spectrum Disorders? 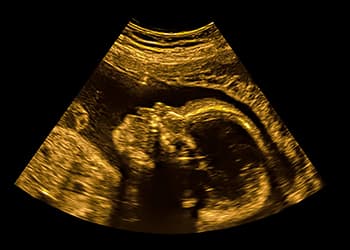 Fetal Alcohol Spectrum Disorders (FASDs) is the umbrella term used to describe these potential effects, as they can range from mild to severe.

Numerous factors may influence where your baby may fall on the spectrum. Some factors that may increase the severity include:

Fetal Alcohol Syndrome (FAS) is the cluster of symptoms that is on the severe end of the spectrum and involves significant physical and mental effects.

There have not been many recent estimates across the US as a whole, but in 1996 the Institute of Medicine estimated FAS prevalence to be between 0.6 and 3.0 cases per 1,000 2. A more recent study of a representative Midwestern community published in 2014 found prevalence of FAS in 6-9 per 1,000 schoolchildren 3.

There is no cure for FAS and the effects are long-term, so the general recommendation is to avoid drinking completely if you are pregnant, think you might be pregnant, or are planning to try and have a baby. In fact, in 2005 the Surgeon General updated their 1981 advisory on alcohol use in pregnancy to encourage complete abstinence from alcohol during pregnancy, rather than just limiting consumption 4.

If your child has developed FAS, they may exhibit the following symptoms, all of which can significantly negatively impact their ability to function to the fullest capacity.

All of these symptoms can significantly negatively impact the individual’s ability to function adequately and independently in the world. They may have trouble holding a job, difficulty with daily life tasks, and trouble making decisions. Their academic performance may be significantly impacted, and they may have significant trouble figuring out how to manage interpersonal relationships.

What can I do if I have consumed alcohol during my pregnancy?

If you are currently pregnant you can immediately stop drinking in order to minimize further harm.

I want to try to get pregnant. When should I stop drinking?

If you think you may be pregnant, stop drinking until you take a test to confirm whether or not you are pregnant. If you are planning on becoming pregnant it is best to stop drinking before you start trying so that you can eliminate any alcohol-related risk. Any drinking, even before you know you’re pregnant, can harm the fetus in crucial stages of development.

What are the factors that affect whether my baby will be affected by alcohol?

Any alcohol can negatively affect a fetus, but the severity of the damage will typically depend on 7:

Can my baby die if I drink alcohol during my pregnancy?

Wouldn’t it be worse if I used drugs like cocaine or heroin?

While certain drugs have scarier reputations—especially illegal ones—alcohol is at the top of the list of dangerous substances to consume during pregnancy.

According to the Institute of Medicine, “of all substances of abuse (including cocaine, heroin, and marijuana), alcohol produces by far the most serious neurobehavioral effects in the fetus” 2.

What if my child seems to display some of the symptoms above and I am worried he/she might have Fetal Alcohol Syndrome?

You can contact your doctor for an evaluation to determine if your child has FAS, and they can refer you to the appropriate specialists, e.g., a developmental pediatrician.

What can I do if my child has been diagnosed with fetal alcohol syndrome?

There is no cure for FAS; however, understanding the condition and getting help to manage the symptoms can go a long way in helping your child to manage FAS-related problems. If your child has FAS:

It can be all-too-easy to misunderstand FAS and the dangers of alcohol consumption for expectant mothers.

Misleading or false information about these risks frequently circulates amongst friends, family, and society as a whole. Here are some common myths about fetal alcohol syndrome and the facts you need to know:

MYTH: Alcohol won’t harm my baby in the early stages of pregnancy before the fetus has really started growing yet.

FACT: It can harm your baby at any point during your pregnancy, as the fetus is constantly developing.

MYTH: Even if my child gets FAS I can get him/her the appropriate treatment and he/she will be fine as an adult.

FACT: While symptoms of FAS can be managed to some degree, FAS is incurable and the effects are mostly irreversible.

MYTH: Just a little bit of alcohol won’t harm my baby. The only women who need to be concerned are heavy drinkers. A few drinks on a special occasion won’t hurt.

FACT: Numerous sources agree that there is no safe amount of alcohol for the developing baby. Also, because fetuses aren’t fully developed they don’t have the ability to process and eliminate alcohol the way you do and thus it can affect them to a greater extent.

The good news is that FAS is the leading preventable cause of birth defects in the United States 7, so there IS something you can do to make sure your baby doesn’t suffer the lifelong consequences detailed above.

If you are having trouble stopping drinking or are struggling with an alcohol use disorder, know that there is help out there so that you can better protect the health of yourself and your child. Call 1-888-744-0069 for help finding a treatment center that’s right for you both. You and your child deserve to be healthy.