An Analysis of Drug Sentencing Trends in the US

The United States justice system tries drug offenses on a daily basis, primarily through state courts. Because the vast majority of drug offenses are state cases rather than federal cases, individuals convicted of these crimes are largely tried and sentenced at the discretion of their local justice systems. This can be problematic, specifically because judgments and sentencing can vary so greatly across the US.

Accordingly, the United States Sentencing Commission developed federal guidelines to provide a general idea of how the courts should handle these cases. But, this is wholly seen as more of a recommendation rather than a rule.

In this study, our team examined sentencing trends for three types of drug offenses: drug possession, drug trafficking, and drug communication facility. The results of our research are compiled below. 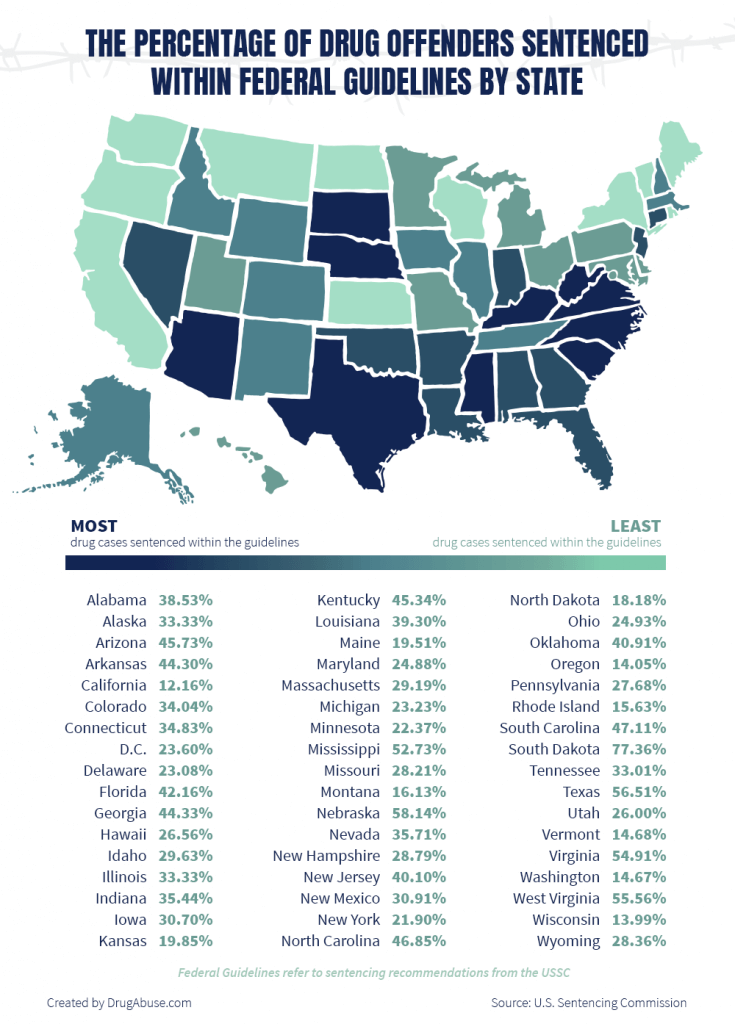 All told, only 6 states and Washington D.C. use the guidelines to sentence drug offenses. The remaining 45 states sentenced less than half of their cases within the guidelines. 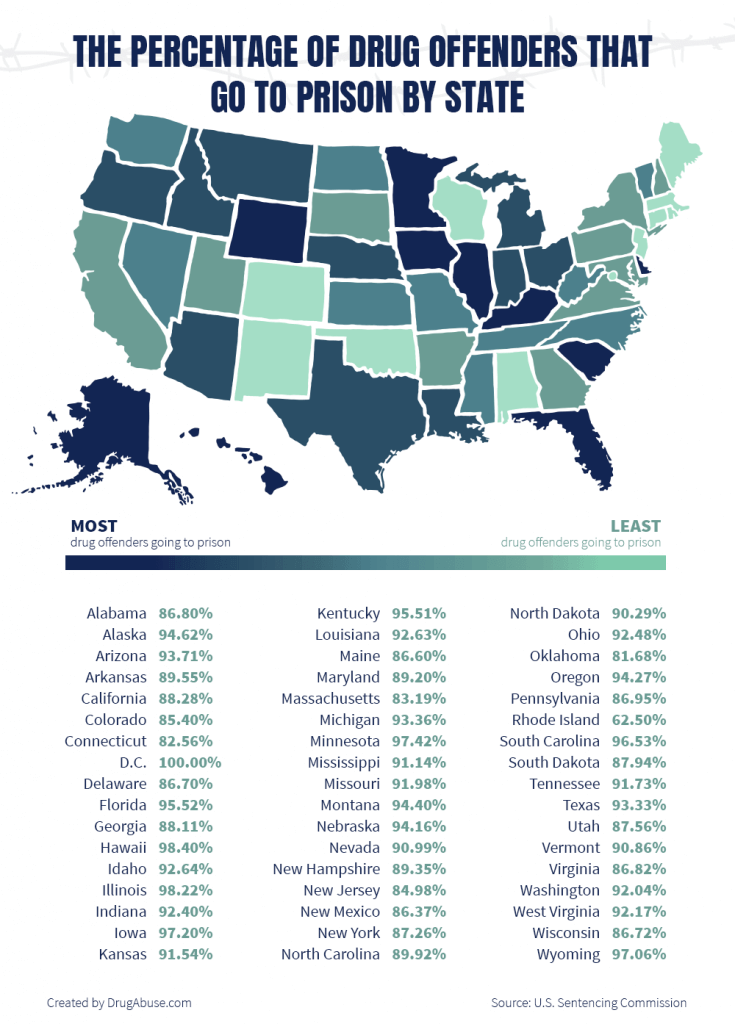 So, what exactly were these offenders being sentenced to? There are a few different options for punishment that the court can dole out – prison, community service, house arrest, or any combination thereof. In the vast majority of cases, offenders were given only prison sentences, rather than a combination of any of the above punishments. In fact, Rhode Island was the only state to sentence less than 80% of their drug offenders exclusively to prison. 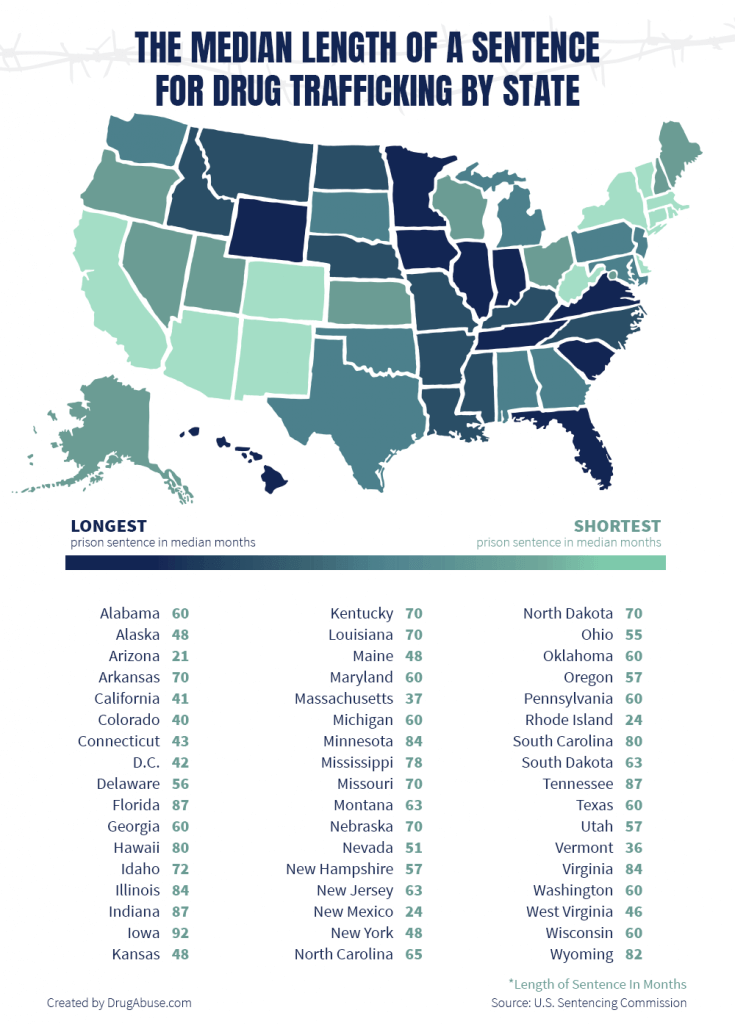 The median sentence in months for drug trafficking was fairly long in general, but it varied widely throughout the US. Iowa tended to sentence their offenders to the longest sentences, a median of 92 months or 7.7 years. Florida, Indiana, and Tennessee, tied for second place at 87 months or 7.3 years, and tied for third with 84 months or 7 years were Illinois, Minnesota, and Virginia.

On the opposite end of the spectrum, Arizona had the shortest median prison terms for their drug offenders at 21 months, less than 2 years! New Mexico and Rhode Island were tied for second-shortest sentences at just 24 months, and Vermont comes in at third-shortest with 36 months. 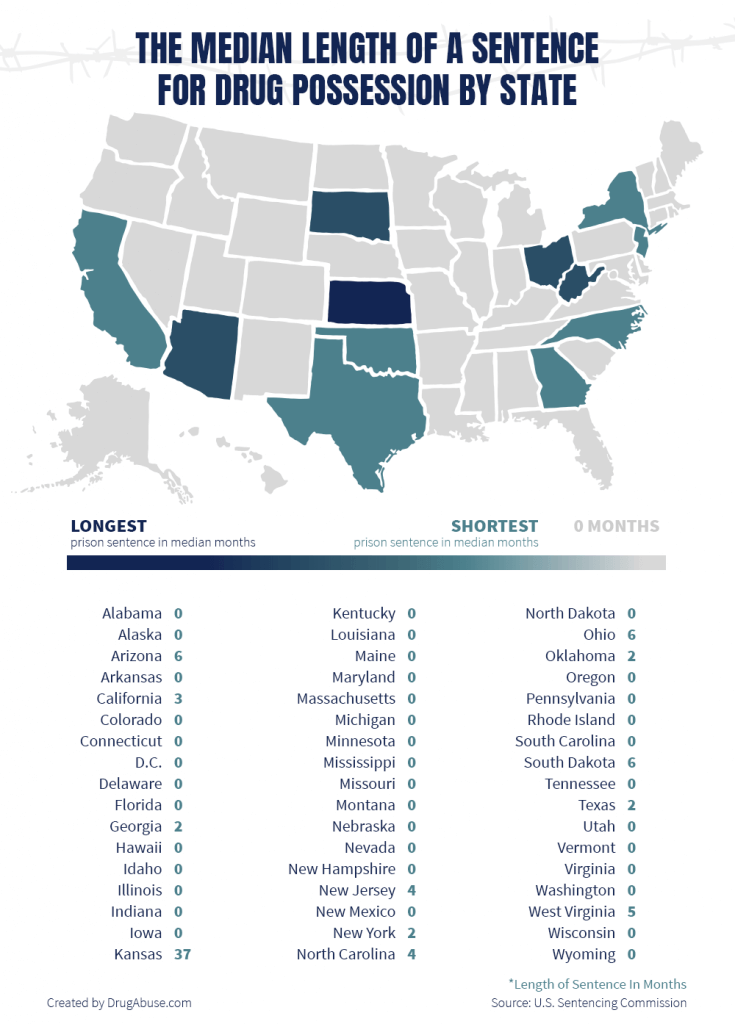 Regardless of where you live or what kind of sentencing standards your state adheres to, drug offenses are typically a difficult consequence of the disease of addiction. If you or someone you love is struggling with addiction, our team has the resources to get them the help they need. You can contact us here for more information.