Has Kombucha Gotten a Bad Rap?

Often touted as a miracle elixir, Kombucha offers a plethora of health benefits.

For those who don’t know, Kombucha is a fermented beverage made from tea, sugar, bacteria, and yeast. It’s available in most health food stores in a variety of flavored tea combinations. Of course anything that’s fermented contains trace amounts of alcohol and some in recovery consider this tea to be a threat to their sobriety.

Examining the Merits of Kombucha

Historically, Kombucha is thought to have originated in the Far East – where its first recorded use comes from China in 221 BC during the Tsin Dynasty. It was known as “The Tea of Immortality.” Initially only available in health food stores, its demand has grown so much that Kombucha can now be found at most grocery stores in the U.S.

But what is it exactly? It’s a probiotic drink that contains healthy bacteria and yeast – known as SCOBY and it claims to keep the body healthy, happy, and vibrant; with benefits including:

Here’s the controversial part: Kombucha contains trace amounts of alcohol, which is defined in the U.S. as less than 0.5 percent alcohol by volume.

What some people might not realize is that many other foods, drinks, and medicines, contain trace amounts of alcohol, such as:

All of these substances are known to skew breathalyzer tests. So, this poses an interesting question: Should people in recovery drink it or abstain?

To Drink…or Not To Drink? 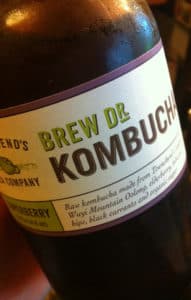 I posted this question on Facebook yesterday and received both positive and negative responses:

The most surprising response was an indirect implication that one should question their understanding of Step One and reconsider their sobriety date!

My experience is that I was skeptical at first. From early sobriety, I was told alcohol was something to be feared. We called it King Alcohol, and we told ourselves that we were powerless over it. My experiences in AA instilled a high level of fear within me. I took the group’s advice to be vigilant, and I avoided any trace of it. I stopped using mouthwash; I wouldn’t eat foods cooked in alcohol; I refused to have it in my home; I wouldn’t go anywhere that served alcohol.

Breaking From the 12 Step Mold

Moving to Portland changed all my perceptions. I discovered people here are more relaxed and health conscious. Portland is a lot more supportive of people’s choices and journeys. What I mean is that my eyes were opened: I saw people in recovery using non-psychoactive marijuana for anxiety, I learned about other treatment modalities such as Refuge Recovery, and I saw a huge range of health tonics, potions, and foods all around me – including people in recovery consuming pints of Kombucha. Initially, I was shocked.

As an inquisitive person, I took this as an opportunity to investigate my feelings. I discovered these feelings stemmed from my background in 12 step groups. I saw people drinking Kombucha who didn’t relapse, and I saw different concepts of recovery – outside of AA – and they were healthy and happy. Those realizations gave me the confidence to burst my own bubble and try Kombucha.

Here’s why: I’ve suffered with acne and IBS my entire life. The stress of moving to a new city made those conditions worse. I’d done some research into gut health and discovered Kombucha has been shown to be beneficial. So I gave it a go. I was confident enough in my recovery to know that, if I was triggered in any way, I would immediately stop. But I wasn’t triggered. I really enjoyed it and, unsurprisingly, my IBS improved and my skin cleared up. I also enjoyed discovering a new and interesting drink other than water, tea, and coffee.

I spoke to an employee of SOMA – who is in recovery – about his view of this “wonder tonic.” He said he “wasn’t in any way threatened by Kombucha”. In fact, he told me he’d done enough work in his 20-plus years in recovery to know what he was initially going to the liquor store for – and he doesn’t drink Kombucha for those reasons.

I have a tendency to agree: I don’t drink Kombucha to escape difficult feelings or to check-out. I drink it because I enjoy its flavor and health benefits. If I was alcohol purest, where would I draw the line? I draw the line by not going to the liquor store.

So my answer is this: It’s entirely a personal choice, and I respect your choice. What I don’t respect is anyone’s implication that my choice gives me less of a recovery.

Have you ever tried Kombucha? Why or why not? Tell us about it in the comments section below!