Joints vs. Edibles: How Marijuana Affects the Body

The primary psychoactive component of marijuana (cannabis)—what deliver the “high,” in other words—is the substance tetrahydrocannabinol (THC).1 THC’s powerful, mind-altering effects derive from its interaction with and activation of the cannabinoid receptor system in the brain.2,3 In varying concentrations, THC is present in a multitude of marijuana-related products, including raw plant materials, infused edible formulations, and potent cannabis extractions.

Though this coveted cannabinoid may undergo various forms of processing prior to use, many of its underlying psychoactive effects will remain fundamentally similar from product to product.

While different forms of marijuana intake have been around for years, recent legislation allowing for legal marijuana use in some parts of the country has led to explosive growth in the marijuana product industry, particularly in Washington state and Colorado (where both medical and recreational use are legalized).

Different methods of cannabis consumption include:4,5,6

Whether ingested by smoking, eating an edible, or another method, THC (as well as any other cannabinoid substance present) will make its way into the bloodstream and eventually be delivered to the brain of the user.7 THC may elicit feelings of relaxation and increased sensitivity to light, sound, and touch. However, THC can also adversely affect short-term memory and coordination and can bring on anxiety and paranoia.3,5,7

In general, some characteristic symptoms of marijuana use are likely to be experienced regardless of how THC enters the bloodstream. Still, there may be significant differences in terms of THC concentration or potency, swiftness of effect onset, and longevity of these symptoms depending on the specific cannabis product used and its associated route or method of intake. Here, we explore two of the more common methods.

Historically, smoking has been one of the most common methods of using marijuana. After inhaling, THC enters the lungs and then passes from the lungs into the bloodstream, which quickly carries the chemical to the brain.8 By smoking a joint, an individual is able to feel the effects of THC much more rapidly than if consumed through an edible.8

As absorption into the bloodstream takes place on a quicker timeframe and, frequently, progresses over a shorter duration than that associated with edibles, the subjective effects of smoking marijuana are likely to be felt more immediately, may peak more quickly, and ultimately last for a shorter period of time.

However, smoking marijuana may have certain adverse effects on respiratory health; though the underlying mechanisms and associated risks appear to differ quite significantly from those related to tobacco smoking, various studies have reported associations with airway inflammation, barotrauma, and obstructive pulmonary issues.9 Much more study is needed to better define these risks. Research shows that while cigarette smoking has been declining in recent years, marijuana use is increasing, and those who smoke marijuana have a much higher rate of tobacco use than those who do not use marijuana.10 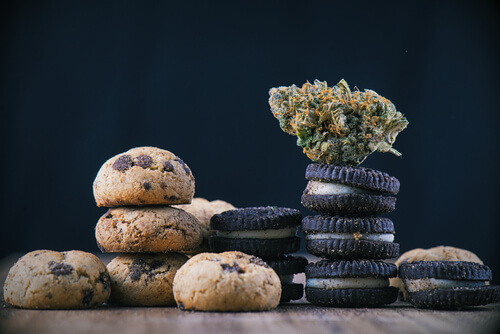 Cannabis and its extracted active ingredients are commonly mixed in to various types of food, including brownies, cookies, and candy.6,7 As manufacturing methods vary, edible can vary greatly in their potency (or cannabinoid concentration).

After eating an edible containing marijuana, THC is absorbed into the bloodstream through the digestive tract and undergoes a first metabolic pass in the liver before entering general circulation. Since this absorption process takes place more slowly than it does through the lungs (in some cases, as long as 30 to 60 minutes before reaching the brain), the effects felt after consuming edibles will often be more gradual in onset but my last much longer.7,8

Consuming a drink brewed with marijuana, such as a tea, will result in a gradual onset of effects similar to that of solid edibles.6,7

Some of the more pronounced differences between smoking a joint and eating an edible are reflected in the speed of onset of effects, the duration until peak effects are experienced, and the longevity of the effects. Smoking is a very rapidly effective route of administration. Joints, bongs, and other methods that involve inhaled smoke or vapor are capable of producing a near-instantaneous “high” that then may last 1 to 3 hours; edibles take longer to kick in, elicit peak effects more slowly, and the effects may be felt for many hours.8

The most important factor to remember, however, is that THC is present with both methods of marijuana intake—carrying with it the same psychoactive qualities and potentially adverse consequences no matter how it is used.

In less than five minutes, see if your loved one—or you—may be addicted to marijuana. Take our online confidential survey.

How to Get Help for Marijuana Misuse

If you think you or a loved one may have a problem with marijuana misuse, help is available and recovery is possible. Professional treatment can put anyone battling a marijuana dependency on the road to a life of sobriety. You can contact a caring admissions navigator with American Addiction Centers (AAC) for free at to learn more about treatment options. You can also check your insurance coverage online now to determine whether your health insurance provider will cover rehabilitation.

Find out if your insurance coverage includes marijuana addiction rehab and treatment by visiting the links below: