You Might Want to Cut Back on the Energy Drinks. Here’s Why…

Years ago, I spent an entire summer behind a small desk in an upstairs room at my dad’s house, studying for the Bar Exam. Cramming 18 different legal subjects into my head over the span of two months was no easy feat, and I quickly realized I needed something else (in addition to my brain power) to help me focus and stay alert. That’s when energy drinks soon became my go-to.

I slowly registered, after weeks of knocking back a couple cans of Red Bull every night, I was becoming dependent on that little “buzz” the drink gave me. The effect was similar to a glass of wine, and it almost made me want to break out a bottle and continue the party, rather than return to my studies.

The Strange Link Between Energy Drinks and Substance Abuse 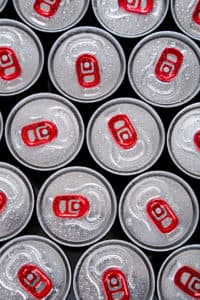 As it turns out, energy drinks’ combination of caffeine, vitamins, and herbs not only provide its consumers a kick, but they’ve recently been found to act as a bit of a gateway drug.

Researchers at the University of Maryland discovered young adults who regularly drank highly caffeinated energy beverages – and sustained that consumption over time – were significantly more likely to use certain drugs, along with being at an increased risk for alcoholism.

“The results suggest energy drink users might be at heightened risk for other substance use, particularly stimulants,” said Amelia Arria, one of the researchers of the study, which was published in the June 2017 edition of Journal of Addiction Medicine.

To arrive at this conclusion, researchers asked 1,099 college students about their energy drink consumption over the last year. The participants were then monitored over the next three years to determine whether their quantities of energy drink consumption increased, decreased, or remained constant. At year five, the participants were assessed for past-year substance use.

In the groups with consistent or increased levels of energy drink consumption, researchers found these students exhibited:

We Need to Know More

Not only does this study show energy drinks have the potential to lead to substance abuse down the road, but some in the treatment industry warn these drinks can negatively affect people in recovery, believing they can provide a convenient replacement high.

Still, further research is needed to confirm these concerns, and experts believe guidance, prevention, and policy efforts need to be implemented to warn young adults about the dangers of regular consumption of energy drinks.

Additional Reading: Turns Out Abusing ADHD Meds Won’t Get You on the Dean’s List