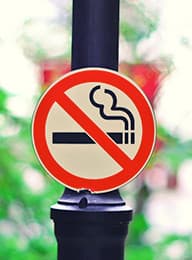 Many people see e-cigarettes as a harmless alternative to nicotine cigarettes. E-cigarette companies like NJOY have even hired on celebrity endorsers including Bruno Mars, while several other stars were seen puffing away on e-cigs during the 2014 Golden Globes.

But as medical professionals have quickly caught on to the health risks associated with e-cigarettes, California has officially become the first state to launch a formal campaign against them.

The Coming War on E-Cigs

The California Department of Health (CDPH) has rolled out both TV and online ads this month that warn residents about the dangers of e-cigarettes. One ad, titled “What Could Go Wrong,” calls them “a new way to inhale toxic chemicals.” A second ad called “Kids Aren’t Alright” addresses the candy-flavored E-cig products that state health officials are intentionally marketed towards children.

“California has been a world leader in tobacco use prevention and cessation since 1990…the aggressive marketing and escalating use of e-cigarettes threatens to erode that progress,” said Dr. Karen Smith, CDPH director and state health officer.

Taking on the Dangers

Here are just a few of the reasons why California has taken up arms against E-cigs:

It’s essential to find out all you can about the dangers of E-cigs and the chemicals contained within the supposedly “safer” nicotine juice. And California is working to make sure that’s exactly what smokers do.

“Our advertising campaign is telling the public to ‘wake up’ to the fact that these are highly addictive products being mass marketed,” concluded Dr. Smith.

If you know someone who uses E-cigarettes, educate them about the dangers of these products. Suggest that they quit and offer support in doing so. But if they insist on continuing to smoke, you can at least urge them to keep these products out of the reach of children and away from any items that could be contaminated by the nicotine juice.

Additional Reading: Smoking Can be a Real Pain…in the Back?