Effects of Crystal Meth Use and Abuse

Methamphetamine is a highly addictive stimulant that can have long-lasting effects on your body. This is a man-made substance that, with the advent of other more efficacious prescription stimulants, now has limited therapeutic use and is only very rarely indicated for intractable ADHD and severe obesity. 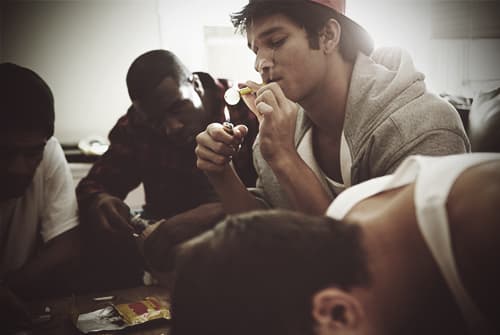 The illicit drug crystal meth is methamphetamine in the form of a rock-like crystal that is usually a semi-transparent white or blue color. This substance is always illegal and has no other purpose than for abuse.

Crystal meth is mostly heated and then smoked in a glass pipe. Less frequently, the drug is crushed up to be snorted or injected. Smoking speeds the delivery of the substance into the bloodstream, which further promotes the addictive nature of the substance.

What are the Short-Term Effects of Methamphetamine Abuse?

People that use the drug are looking for the immediate and long-lasting high for which the drug has gained notoriety. When the substance is smoked, the vapor moves quickly from the lungs to the bloodstream—where it then travels rapidly to the brain. Since the drug acts as a stimulant throughout the brain and body, there is an almost instant euphoria, followed by an increase in energy and alertness—effects that can last for up to 12 hours.

Other desired effects of crystal meth include:

Unsurprisingly, the desirable effects quickly give way to the undesirable effects of the substance. For example, even short-term use can elicit erratic and even violent behavior when taken in large doses.

Other Side Effects of Crystal Meth Include:

Consistent use of crystal meth can result in severe anxiety, paranoia, and insomnia. Additionally, thoughts of suicide—or even homicide—have been noted in some meth abusers.

When the crystal meth no longer yields a high, the user enters a stage sometimes referred to as “tweaking.” During this time, they may feel intense cravings and despair. It is at this point where psychotic symptoms present—with users sometimes struggling with delusions and other altered perceptions of reality. Experiencing this unsettling development signals a point in time where many will seek and enter treatment programs. With the presenting symptoms, they may begin sobriety in an inpatient mental health facility before being transferred to detoxification or rehabilitation services.

After long-term insomnia and loss of appetite that active users experience ends, most people tend to do little more than sleep during the days after “tweaking.” After this crash, comes a period where the person dependent on crystal meth will be hungry, thirsty, and fatigued due to the effects of the substance. This period can last up to 2 weeks and is sometimes accompanied by the onset of clinically significant depression.

Some people take crystal meth to experience a specific set of stimulant side effects. This includes the decrease in appetite, increased energy levels, and increased metabolism that some users attempt to take advantage of to achieve weight loss. The drug also tends to increase libido, leading to abuse of the drug for that purpose alone.

It’s safe to say that none of the perceived short-term benefits of a dangerous drug are worth the risk of developing a deadly dependency that comes with them.

Am I Addicted to Crystal Meth?

Take our addiction quiz today to help determine whether you have a problem, as well as to assess the severity of any dependency that may be present.

Taken over a long period of time, crystal meth can cause severe physical and psychological issues as the short-term effects grow in intensity and complexity. Signs of long-term crystal meth abuse include:

Severe crystal meth abuse can also cause outward signs of aging in users. Since the drug destroys tissues and blood vessels and hampers the body’s ability to heal, users often develop acne, and the skin takes on a dull look and loses its elasticity. The teeth can begin to decay and crack, resulting in a condition known as “meth mouth.”

One of the most serious long-term side outcomes of crystal meth, however, is sudden death from cardiac arrest or stroke.

The side effects can be swift and severe, especially for pregnant women. The drug can cause a baby to be born prematurely and suffer birth defects–including cleft palate or heart abnormalities. Babies born to users are often very small in size due to lack of nutrition and prenatal care during pregnancy. It is also present in the breast milk of users, putting nursing babies at risk.

Learn more on our Overview on Using Meth and Pregnancy page.

Crystal meth signals the brain to fire off an increased amount of dopamine, a chemical that causes a feeling of reward or pleasure.

The increased activity of dopamine is what scientists believe plays a large role in the development of addiction to certain drugs. It is thought that the positive feeling from dopamine is so strong—and intensely rewarding—that it reinforces the behavior that initiated its release.

As users become more tolerant of crystal meth, they will need more of the substance to achieve the desired high and will take ever-increasing amounts, placing themselves at risk for overdose and furthering fueling the body’s dependency on the drug.

Overtime – after a period of persistent stimulant intoxication – dopamine receptor activity is severely impaired, which can cause perceptions of decreased happiness and pleasure and even lead to permanent cognitive impairments.

In less than five minutes, see if your loved one—or you—is addicted to crystal meth. Take our online confidential survey. 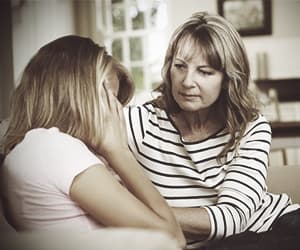 Symptoms of withdrawal from crystal meth can include:

Withdrawal from crystal meth can be very uncomfortable and may lead users to relapse in an attempt to alleviate the symptoms. Being in a medically supervised detox program can ensure the management of symptoms and may help prevent relapse.

Successful completion of a detoxification period often marks the initial part of treatment, which later leads to a more protracted stay at an inpatient rehab program or participation in a structured outpatient program.

Inpatient programs or residential rehabilitation can be highly effective methods for treating addiction, in that they allow the user to focus intensely on sobriety with minimal distractions or temptations. Most programs range from 30-90 days, with longer stays available for more severe cases of addiction.