Psychoactive substances, by definition, change the way people think and feel. Hallucinogens do this in a unique way, by altering the way that humans sense and perceive the world—making false visual, auditory, and tactile sensations seem real.

One of the most commonly used hallucinogens is D-lysergic acid diethylamide, or LSD. LSD (“acid,” “yellow sunshine”) is a synthetic, powerfully hallucinogenic drug that is derived from lysergic acid—a substance produced in a fungus that grows on rye and other grains 1.

Recurrent LSD use is potentially dangerous and can seriously impact an individual’s thoughts, emotions and behavior. If someone you know is struggling with LSD use, treatment is available, and there are a number of ways to intervene.

While LSD is not considered by most to have physically addictive properties, psychological addiction to this hallucinogen may occur, and problematic use of this drug can cause numerous issues in a user’s life, requiring treatment.

Approaching someone you care about with a substance addiction can be difficult. In some cases, the user will have enough insight and awareness to recognize their condition and, with the help of others, seek appropriate care. More often than not, however, this doesn’t happen. In many cases, addicted individuals are in denial about their substance use and the extent to which they have control over it.

Should I Use an Intervention? 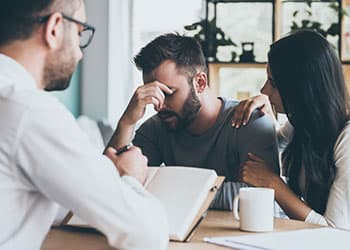 In cases where the person steadfastly refuses to cut back or quit their LSD use despite problems that it causes, and is reluctant to seek care or receive help from those around them, an intervention might be the most effective approach.

The word “intervention” is sure to conjure up a number of images—most likely, and unfortunately, supplied readily by the recent surge in reality TV and radio shows depicting substance addiction and the confrontational meetings that bring the person back to a path of sobriety, health, and happiness. In contrast with the highly charged, dramatic situations that transpire on TV, many healthcare providers regularly carry out interventions in a fairly routine medical setting.”

“Brief interventions” have received considerable support from research and are endorsed by The Substance Abuse and Mental Health Services Administration (SAMHSA). Brief interventions are essentially short counseling sessions—lasting anywhere from 5-30 minutes—that are administered by trained healthcare providers 2. Brief interventions are most often used in cases where the individual has not yet developed a serious addiction but is showing signs of risky or problematic use 2. The intervention is designed to provide the individual with insight into their use and the inherent risks in order to get them to stop their drug use. However, in some cases, this technique is used for individuals showing more serious substance dependence and is aimed at getting them to accept more formal addiction treatment 2.

If you plan on carrying out an intervention outside the medical setting, be advised that doing so without proper planning and support can increase the confrontation between your addicted loved one and may actually harm their willingness to receive treatment. You may wish to better prepare by enlisting the help of a professional interventionist or other knowledgeable treatment professional to guide the intervention, help plan treatment options, and ensure that the communication throughout is only helpful and loving, as opposed to judgmental or blaming.

Another research-backed treatment approach to get people into treatment is Community Reinforcement and Family Training, or CRAFT 3. The American Psychological Association describes the purpose of CRAFT as a way to increase compliance of an individual in substance abuse treatment by properly engaging family and community members. People who comprise the addicted individual’s support system are trained in ways that strengthen this system and maximize the individual’s chances of maintaining sobriety 4.

CRAFT’s therapeutic impact extends beyond the substance abusing individual by encouraging concerned significant others (CSO’s) to take care of themselves in addition to their addicted loved one (the identified patient, or IP). While it may seem counter-intuitive at first glance, this method confers a positive, indirect effect on the IP; the overall support system that is integral to the health and recovery of the addicted individual has a better chance of thriving when all the individuals making up that support system take care of themselves 3.

Addiction is the recurrent use of a substance despite the negative consequences its use brings. While research investigating the addictive qualities of hallucinogens is still ongoing, the U.S. government has stated that LSD does not induce drug-seeking behavior like some other hallucinogens (e.g. PCP) or substances (e.g. cocaine, heroin, alcohol) 1,5. The reason for this is that its use does not precipitate the chemical changes in the brain responsible for the development of cravings.

Individuals, however, can still develop problematic patterns of compulsive use analogous to those seen with more commonly recognized drugs of abuse (such as cocaine or heroin). LSD addiction—or, in this case, what’s known as a hallucinogen use disorder—is a real, diagnosable entity, and it is treatable as such. The phenomenon of LSD tolerance also exists, in which users require larger amounts over time to experience the desired effects 5. This ramping up of use, over time, can increase the chances of overdose and/or ongoing negative physical and mental effects.

Chronic LSD use can cause distress or interfere with someone’s social or work life. Signs that you or someone you know might have a problem with LSD use include:

If this does sound like you or someone you know, call our hotline today at .

While LSD may not be associated with uncontrollable drug-seeking behavior, its use can still have a detrimental impact on those who regularly use it. LSD’s unique psychoactive effects can give rise to a number of potentially dangerous situations for the user. Some of these profoundly impairing effects include 1:

While LSD won’t induce powerful physical cravings in the same way that drugs like heroin and cocaine will, the effects can become so desirable for the user that they continue to use it despite the mounting negative consequences 6. They may even need to keep taking more and more to combat their developing tolerance. This is when treatment for LSD addiction becomes vital.

If the individual does not get treatment for LSD use, they are continually subject to the dangers of LSD, both physical and psychological, which may include 1:

A rare, but particularly disturbing long-term effect of LSD use is hallucinogen-persisting perception disorder, or HPPD 7. HPPD is a long-lasting condition characterized by the occurrence of spontaneous flashbacks reminiscent of acute hallucinogen intoxication 7. Flashbacks occur in a wide range of those who have used hallucinogens—anywhere from 5% to 50% 7.

There are currently no known government-approved medications to specifically treat LSD dependence 1. This does not mean, however, that there is no way to attend to or help someone who has an LSD use problem, or that existing treatments will not work for someone with LSD addiction/abuse.

Abruptly stopping LSD after a period of sustained use does not result in marked withdrawal symptoms like those commonly associated with physically addictive drugs; however, those who have been using LSD may experience depressive or psychotic symptoms during the acute withdrawal phase that may require medical management.

As one of the less commonly abused drugs in the community, few treatment centers will have a specific protocol for treating LSD abuse. However, in cases where individuals abuse LSD only, or when LSD is the primary substance of abuse, inpatient treatment can provide numerous benefits, including:

Medications may be administered to directly address the individual’s unique clinical presentation, which can include psychotic or other mood symptoms that result from LSD abuse. Those suffering from “bad trips” may present with severe symptoms that may be successfully managed with medical intervention. Medications may also be used to alleviate the distressing symptoms seen in cases of HPPD. In one case study, an individual who experienced the onset of HPPD responded to the anticonvulsant lamotrigine after an unsuccessful regimen of antidepressants and risperidone, an antipsychotic medication 6.

Outpatient care offers similar services to that of inpatient care. The primary difference is that outpatient care does not entail living at the treatment facility. Counseling and therapy are carried out during the day, allowing the user to attend work or other daily responsibilities. 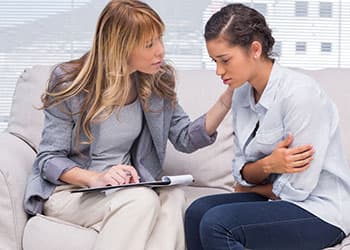 Like diabetes, asthma, or other chronic conditions, addiction requires ongoing monitoring and support 7.

Counseling and therapy does not necessarily stop at the end of a structured treatment program, e.g., at the end of rehab. It can continue indefinitely to provide the support that recovering individuals need to continue their path of sobriety.

A significant number of individuals who experience substance addiction also suffer from mental illness. Depression and anxiety are particularly common. Thus, not only does the addiction itself have to be monitored, but also the behaviors and thoughts that precipitate substance use, or compound the stress and burden of abstention.

Other recommendations for ongoing support for addiction include recovery groups and 12 step programs. Twelve-step programs include Narcotics Anonymous, among many others.

To find the best treatment option for you or someone you love, call us today at .