Heroin is a powerful opiate narcotic that has no legal medical use in the US. Outside of the US, pharmaceutical grade heroin is still produced for limited therapeutic use. It is occasionally prescribed for severe pain in countries such as the United Kingdom. Other names include: 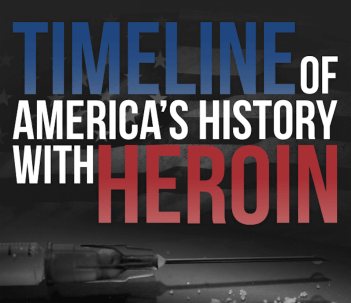 Click the image above to view a timeline of the US’s history with heroin.

Humans have cultivated the opium poppy and used the resin from its flowers as a medicinal and recreational drug since at least the time of the ancient Sumerians 5500 years ago in what is today known as Iraq. The ancient Greeks and Romans were familiar with opium as a pain reliever, and it was a common product transported along the Silk Road from Asia to markets in medieval Europe.

When purified morphine was first extracted from opium in the early 1800s, it was one of the most powerful painkilling drugs known to man.

Morphine is 10 times more powerful than opium. Not long after its purification was heralded publicly, Western physicians turned their full attention to morphine and related drugs—collectively known as narcotics, opiates, or opioids.

The British chemist Charles Romley Alder Wright was the first to synthesize heroin in 1874 when he added 2 acetyl groups to the chemical structure of morphine. Although he and his colleagues experimented with the new substance by injecting it into dogs and rabbits, no practical use resulted from this discovery, and it was largely ignored by the scientific community.

Heroin as a Medicine

In August 1897, Felix Hoffmann, the German chemist who first created aspirin for the Bayer pharmaceutical company, synthesized heroin in an attempt to convert morphine into another narcotic analgesic, codeine. The new drug was found to be up to twice as potent as morphine, and Bayer gave the powerful new drug the trade name “Heroin” after “heroisch,” a German word meaning heroic.

It was presented to doctors as a cough suppressant and analgesic for agonizingly painful respiratory illnesses such as pneumonia and tuberculosis, which were commonly treated at that time with other narcotics like codeine.

Though Bayer could not patent the drug due to Wright’s earlier discovery, it was widely marketed by the company as a non-addictive alternative to morphine and codeine. It soon became used for a variety of medical applications including:

Although physicians around the world seized on heroin as a safe, non-addictive substitute for morphine, evidence quickly mounted that it was, in fact, quite dangerous in its own right.

Reports soon appeared in the medical literature indicating that tolerance rapidly developed in patients treated with heroin, requiring doses to be increased over time, and that patients would often continue taking it even after their condition improved and their doctor had stopped prescribing it. Even more alarming, many patients who stopped taking it experienced withdrawal symptoms more severe than those caused by morphine dependence.

Heroin addiction became a serious problem in the US in the beginning of the 20th century, in part, because there were no nationwide regulations restricting its availability. It’s interesting to note that:

Part of the heroin problem in the US stemmed from the innumerable “patent” remedies that were available in local pharmacies without a prescription. Many of these medicines contained heroin and other powerful drugs but rarely revealed their ingredients.

Governmental control of heroin was extended by the Harrison Narcotic Tax Act of 1914, which:

Though it may have encouraged some addicts to search for a way out of their drug dependence, the Harrison Act also marked the beginning of the practice of criminalizing drug addiction instead of treating it as a health issue.

Finally, Congress outlawed the importation of opium for the purpose of manufacturing heroin in 1924, essentially ending legal production of the drug in the US. Subsequent laws further restricted legal used for heroin, and today it is broadly prohibited for all medical and recreational purposes.

Heroin is converted to morphine in the brain, and the morphine molecules then produce pain-relieving and euphoric effects in users by binding to opioid receptors in the brain and spinal cord.

The chemical structure of it allows it enter the brain more quickly than morphine, so the effects of heroin are felt more quickly and more strongly than those of an equivalent amount of morphine.

The powerful euphoric high abusers feel when snorting, smoking, or injecting it often leads to repeated and habitual use of this drug. However, the body rapidly adapts to the overstimulation of opioid receptors, and, over time, abusers must take greater doses of heroin to achieve the same “high.”

Finally, after a period of chronic use, most users will pass into a state of physical dependence, in which the body has become so accustomed to the drug that the addict will become physically ill if he or she stops taking the drug suddenly.

Currently available statistics on heroin abuse show a steady increase since the early 2000s in:

Though the number of past-year and past-month users has stabilized in the last 2 years and treatment facility admissions have declined, it is difficult to tell if this is the beginning of a decline abuse in this country, or only a pause in the growth of its popularity.

The National Institute on Drug Abuse (NIDA) and the Drug Enforcement Agency (DEA) have linked this upswing in abuse to the dramatic rise in prescriptions for opiate painkillers written by doctors since the 1990s. Individuals who become addicted to prescription opiates often switch to heroin because it is less expensive than many illicit pharmaceutical narcotics. This switch is especially prevalent in oxycodone users.

Some important statistics on heroin use in the US from the 2013 National Survey on Drug Use and Health (NSDUH) and the Monitoring the Future National Survey include the following:

A 2015 study published in the Center for Disease Control and Prevention’s Morbidity and Mortality Weekly Report examined data from the NSDUH and the National Vital Statistics System and reported the following trends in heroin use from 2002 to 2013:

Internet searches including the term “heroin” show similar patterns to known statistics of heroin abuse. Notable parallels include an increase in the number of searches since 2004 and a higher number of searches initiated Northeastern states, which has been the region most affected by the resurgence in addiction.

The demand for heroin is global, with an estimated 16.4 million opiate users and 560 tons of the drug produced worldwide in 2013. Figures for use and law-enforcement seizures of the drug both show that central Asia and the Russian Federation are squarely at the center of the world’s heroin market.

One reason for the severe heroin problem in Russia, Iran, and nearby countries is their proximity to Afghanistan, the world’s preeminent producer of this drug. Opium cultivation and production have long been an important source of income for Afghans, and the industry survived both the harsh rule of the Taliban and the American invasion in 2001 virtually unscathed.

Afghanistan has greater than 4 times as much land dedicated to poppy cultivation as the next largest source, Myanmar. In addition, the amount of opium produced per hectare in Afghanistan is far higher than that in other producing countries. The result of these factors is that Afghanistan now produces about 80% of the world’s supply of heroin.

The primary source of most of the heroin in the US is not Afghanistan, but Colombia, so the market forces in this country differ from those in Europe and Asia. Effective cooperation between US and Colombian anti-narcotic efforts have begun to decrease the supply of heroin and cocaine available, resulting in increased prices for both drugs.

Though the increase in US heroin use over the past 15 years is due in large part to the low price for this drug compared to pharmaceutical painkillers on the black market, street prices have increased sharply in recent years from a low of $779 per 1/10th of a gram of pure heroin to $995 in 2010. It remains to be seen if this cost increase is one of the reasons the growth in heroin use has slowed over the past several years.

It is classified as a Schedule I controlled substance by the DEA. Drugs listed in this Schedule are considered to have:

All possession without a license is strictly prohibited. Other Schedule I drugs include cannabis, ecstasy, and peyote.

Seizures of heroin by the DEA have closely tracked with overall use in the US, reaching a low of around 400 kg in 1999 before steadily increasing in the next decade to over 1000 kg in 2011.

As a dangerous Schedule I drug, legal penalties for those found to be in possession of heroin are severe.

States have individual laws penalizing possession and can be imposed in addition to federal sentences. Among the harshest state laws is one passed by Kentucky in 2015. Under the new statute, possession of as little as 2 grams of heroin could result in a prison sentence of 5 to 10 years, and 10- to 20-year sentences can be imposed for cases involving more than 100 grams.

How Dangerous Is Heroin?

Like most opioid drugs, pure heroin’s main danger is tolerance and dependence, which can precipitate life-threatening overdose. Adding to its undeniably hazardous nature is the fact that it is manufactured in an unregulated environment and abused under many risky conditions—making obtaining and using it in the real world a highly dangerous activity.

Another primary danger to users is the fact that batches of street heroin vary enormously in strength and levels of impurities. A huge variety of adulterant substances – some quite potent, such as the pharmaceutical Fentanyl – are used to dilute heroin and place users at risk of overdose, poisoning, cardiovascular issues and/or allergic reactions.

Injecting heroin can easily lead to a potentially fatal overdose if it is more pure than expected. Overdose victims usually die when their breathing stops, and so mixing it with other depressants such as alcohol or tranquilizers also greatly increases the dangers of a fatality. If seen in time, medical professionals can treat cases of overdose using opioid antagonists – like naloxone (Narcan) – that reverse the effects of heroin.

Intervenous use of heroin has many other inherent dangers separate from those posed by the drug itself. Sharing of non-sterile needles and other injecting paraphernalia increases the risk of:

Perhaps the greatest danger of heroin is its incredible potential to cause dependence and addiction in users. Heroin addiction is a powerful force that causes individuals to continue using despite negative consequences on their personal lives and finances. Many people have lost their families, their friends, and their wealth while pursuing the next fix.