Marijuana (cannabis, weed, grass, hashish) is the most widely used illicit drug in the United States. According to the 2014 National Survey on Drug Use and Health, an estimated 8.4% of all Americans over the age of 12 (22.2 million people) used marijuana in the past month, which is higher than the percentage of marijuana users reported in any of the previous 12 years 1.

Although attitudes and laws about marijuana use in some US states have become more permissive, this drug does have the potential to cause harm. There are many negative side effects of marijuana use including anxiety, increased heart rate, learning problems, sleep disturbances, and even addiction 2.

Quitting marijuana can free users from the negative side effects of the drug. In 2014 alone, 138,000 people in the US voluntarily entered treatment to recover from marijuana abuse 2. It is important to note that withdrawal is a factor in quitting marijuana; in fact, new research shows that one of the biggest hurdles standing in the way of ending marijuana use is withdrawal 5.

What Is Marijuana Withdrawal?

Withdrawal symptoms occur when a person who is dependent on a drug suddenly stops taking it. People who repeatedly use certain drugs often get withdrawal symptoms when they quit because their brains and bodies adapt, or “get used to,” having the drug. If the drug is suddenly removed, the user may experience withdrawal symptoms until the brain and body have time to re-adjust to the new, drug-free state—a process that normally will take place over several days or weeks.

Withdrawal symptoms are different depending on which drug is involved. It has been debated for several years whether or not marijuana can cause withdrawal symptoms in heavy users who stop taking the drug 5. However, in 2013, the American Psychiatric Association definitively included cannabis withdrawal in the Diagnostic and Statistical Manual of Mental Disorders (DSM), a handbook used by US healthcare professionals that lists all medically recognized mental disorders. 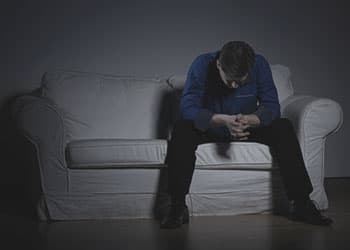 Heavy marijuana abusers who experience withdrawal when they stop using the drug often may experience feelings of anxiety and depression. Studies have shown that people with depression are more likely to use marijuana and to be dependent on the drug than those who are not 6. In these individuals, marijuana withdrawal might make their depression worse, and they may turn back to using to relieve these feelings.

Signs and Symptoms of Marijuana Withdrawal

Common physical symptoms of withdrawal include 8:

Withdrawal for heavy marijuana users most often involves psychological symptoms that include 8:

Also, marijuana withdrawal may last longer than most other drugs because the main chemical that produces marijuana’s effects, delta-9 tetrahydrocannabinol (THC), stays in the body for several weeks, instead of several hours. Therefore, certain symptoms of marijuana withdrawal can last for weeks or even months 9.

For example, a review of 19 different studies showed that former users had sleep difficulties and strange dreams for at least 45 days after last using marijuana 7. Symptoms such as these may be part of what is known as a post-acute withdrawal syndrome (PAWS).

Such long-lasting withdrawal symptoms may make it more challenging to quit using marijuana. A recent study showed that heavy users who try to quit are less likely to remain abstinent if they experience withdrawal symptoms than users who do not 10. The researchers of this study suggest that starting treatment as soon as possible will make it more likely that a person in recovery will be successful in remaining abstinent from marijuana.

There are currently no medicines approved by the US Food and Drug Administration (FDA) to treat marijuana dependence.

There have been clinical trials of several drugs to find out if they can relieve withdrawal symptoms, including anti-anxiety drugs, antidepressants, sleep aids, anti-seizure drugs, mood stabilizers, and THC replacements 11. Of these, the most promising results have come from the sleep aid zolpidem (Ambien), the anti-anxiety medication buspirone (BuSpar), and the anti-convulsant drug gabapentin (Neurontin) 2. These drugs relieve the insomnia and anxiety associated with marijuana withdrawal, and in the case of gabapentin, can also help to improve former users’ ability to think clearly during withdrawal 9. These treatments are still being researched for use in the treatment of marijuana withdrawal.

While users detoxing from marijuana may do so from home, some prefer to do so with the help of a detoxification (detox) facility. The addiction professionals working in these programs can help patients recovering from marijuana dependence to stay safe and comfortable during the withdrawal process. Professional detox can also help to keep patients from relapsing during this critical time.

Treatment doesn’t end with detox—rather, it starts after detox is successfully completed. Once your body is free of marijuana, you can move into recovery from a stable starting point. Engaging in ongoing treatment helps your chances of recovering successfully. Research has shown that people who seek help with marijuana addiction have used the drug daily for an average of 10 years and have attempted to quit 6 times, on average 2. These numbers show how truly difficult it can be to quit on your own.

Because there are no medications approved to specifically manage marijuana dependence or addiction, it is usually treated with behavioral therapies. Three therapies that have been successful are 2:

Whichever treatment method is chosen, individuals recovering from marijuana dependence will be more likely to succeed with help than simply trying to quit on their own. If you need help finding a treatment program, call us any time of day or night at .