Among patients in treatment programs for drug abuse and addiction (also known as substance use disorder, or SUD), as many as 97% also use tobacco 1. Although the health dangers of cigarette smoking are well known, most smokers who enter drug treatment are not offered resources to help them stop their tobacco use 1.

Because there are relatively few treatment programs that address smoking, the . Evidence also suggests that treatment can encourage non-smokers to start. One study of smoking and alcohol treatment found that in the first year after completing treatment, 15% of non-smokers had started using tobacco 3.

There are 3 main beliefs used to justify not combining anti-smoking efforts with drug and alcohol treatment. These are 2,4:

More recently, studies into the links between smoking and drug treatment have challenged these traditional views and suggest that there are many benefits to treating tobacco addiction along with SUD. As a result, anti-smoking services are being made increasingly available in more drug rehab centers 1.

Oftentimes, drug treatment facilities do not devote resources to services like anti-smoking therapy because there is a perception that 2. However, surveys have shown that:

Clearly, patients in drug abuse recovery are willing to quit smoking, but the science is more mixed when it comes to the success rates of those attempting to quit. A personal history of alcoholism seems to reduce the chances of successfully quitting tobacco 4, and other studies have shown anti-smoking therapies in drug rehabilitation facilities have success rates as low as 4.7% after 6 months 6.

In light of this evidence it appears that quitting smoking is at least possible for patients in drug treatment, and more importantly, there is a lot of interest among these individuals to try. This is important because even small numbers of successful quitters will produce large benefits in major health benefits to those who successfully quit 6.

Why Is Quitting Smoking Important?

In the past, the traditional view among rehabilitation professionals has been that smoking is less dangerous than drug addiction and, therefore, not a priority during drug treatment. However, the results from several studies paint a clear picture of the danger smoking presents to drug abusers:

Given what we know today about the dangers of tobacco use, it is not surprising that smoking is responsible for many health problems found among drug abusers. What is surprising, perhaps, is the extent of harm that it causes in this drug abusing population. While it is often seen as low on the priority list, offering anti-smoking therapies to patients in recovery could save many lives.

The Link Between Smoking and Drug Use 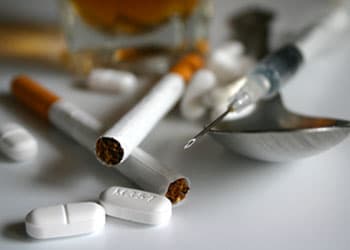 Many researchers have explored the connection between smoking and drug use, and the statistics show that there is a very strong correlation between these behaviors. The exact numbers vary among different surveys, but between 75% and 98% of people with SUD also use tobacco 9, compared to only 16.8% of US adults, in general 11.

Scientists point to several possible reasons for the strong association between smoking and drug use, including:

All of the above point to the possibility that quitting tobacco and other drugs at the same time may be beneficial since these behaviors seem to be so intertwined with each other. Indeed, studies that specifically consider whether smoking affects the success or failure of drug treatment show that quitting tobacco can improve the chances of prolonged drug abstinence.

These statistics clearly demonstrate that stopping tobacco use is beneficial to the maintenance of long-term abstinence even though attempting to quit smoking during drug treatment may increase the difficulty of succeeding for some patients.

Tobacco dependence is often the only addiction not addressed by drug treatment programs; however, more facilities are currently adding anti-smoking therapies to the services they offer.

Quitting smoking offers several benefits to patients in drug treatment, but the most important ones are improved health and increased chances of a successful recovery.

If you are considering enrolling in a treatment program for drug or alcohol addiction and also smoke, you may want to consider smoking policies when choosing a facility. Call us today and find a drug rehabilitation program that is right for you. You can also contact free narcotics and drug abuse hotline numbers.