The Effects of Spice Use

Substances like Spice and K2 – which contain smokable plant material coated with synthetic cannabinoids or other substances – are often sold in gas stations and head shops. Because Spice can be purchased legally in many places, and because it is often advertised as a “natural” marijuana alternative, many use it under the guise of safety. Being easily obtainable, and with a public perception as an innocuous natural high–Spice and K2 carry much appeal to teens and younger adults.

Synthetic marijuana, however, is not natural and can have a number of dangerous side effects. It can also be addictive, and can produce severe withdrawal symptoms in those who discontinue use.

In fact, many countries, states and other localities have made synthetic marijuana illegal due to its side effects. Today, most leading government and industry health organizations officially view synthetic cannabinoids as dangerous and addictive drugs.

A Spice/K2 user is much more likely to experience serious adverse effects than a person smoking natural cannabis. These adverse effects may include psychotic symptoms such as paranoia and hallucinations. Furthermore, Spice use has been implicated in cases of kidney failure and heart attacks. With reported effects including reduced blood flow to the heart (myocardial ischemia), abuse of these substances can lead to severe and lasting heart conditions.

“I dropped 20 plus pounds in a week… I was sick. I cried every night because I couldn’t sleep.”
Spice has real effects on real people. Read their stories and share yours.

Synthetic marijuana is often sought for the following effects, which mimic those of natural marijuana:

These desirable feelings, however, are often countered by dangerous side effects, which vary by the specific chemical compounds present in the drug (which is unregulated, and frequently changing) and may include: 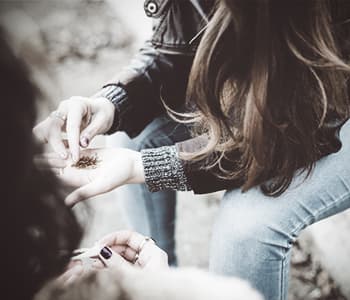 Long-term effects of synthetic marijuana use is largely unknown due to its status as a relatively new drug on the market. However, heart damage from myocardial ischemia and renal damage are severe effects that have been reported. Both, obviously, are ominous signs of the potential long-term consequences.

Frequent Spice use has also been known to elicit seizure activity in some individuals.

Unlike marijuana, synthetic cannabinoids like Spice and K2 frequently elicit withdrawal symptoms–some quite severe. Withdrawing from Spice can be extremely uncomfortable, with symptoms including:

One of the telltale signs that a physical drug addiction has developed is the presence of an associated withdrawal syndrome. When long-term Spice users attempt to quit, serious withdrawal symptoms can occur as mentioned above.

Management of withdrawal can sometimes involves a formal detoxing–in the case of Spice, this can often take a week or longer.

Substance abuse treatment will commence after detox is completed, and can last anywhere from 1-6 months or longer, depending on a number of factors including severity of drug dependency and any complicating social issues. Many drug treatment programs require the patient to stay in a rehab for the duration of treatment, while other programs are implemented on an outpatient basis.

Time and/or budget constraints are a serious concern for many, and sometimes necessitate a shorter residential stay or outpatient treatment options.

The severity of illness will naturally play a part in the type of program one chooses. It is always a good idea to undergo formal evaluation of your specific substance abuse situation and any related issues by an addiction treatment professional, who will then help make the recommendation for the type of treatment that will be most beneficial.

Residential programs provide the patient with full-time care that includes round-the clock medical treatment, support, and guidance. These programs often last 30-90 days (or longer, depending upon the seriousness of the patient’s condition.

Luxury rehab centers are also available at a higher price point and include a range of amenities that may include:

Executive rehab facilities are specifically targeted to those who can’t leave their business during treatment.

These facilities allow computer access and mobile devices so patients can continue working while receiving care.

Exercises such as yoga, meditation and other Eastern practices are conducted to help manage stress, minimize distractions and allow those in treatment to focus on their most important goal, which is recovery from addiction.

As a formal treatment period approaches its end, most comprehensive treatment programs will have already made thorough aftercare preparations, to ensure continuity of care as you progress through your recovery. Some of these aftercare options include:

Deciding upon the right type of rehab for you starts with first knowing what is out there and then having a discussion with a medical professional you trust.

Call to learn more about treatment and how to find your way back from addiction.