Authored By Timothy Esteves
Leave a Comment :: Posted to: Addiction in the News, Drugs and the Law

Spare a thought for the forgotten world of nicotine addiction. With countless studies being released eroding the stigma of alcoholism as a failure as opposed to a disease, and with the bulk of media attention focused on the ongoing opioid epidemic, the idea of nicotine and tobacco addiction seems almost marginal. Perhaps because tobacco induces few immediate life-threatening effects (like opioid overdoses) and has less effect on behavior (like drunken rabblerousing).

Regardless, nicotine addiction remains an issue, especially now that American teens are being exposed to the drug in epidemic numbers.

What’s Being Done About it? 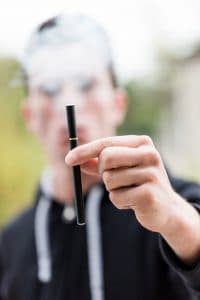 The Food and Drug Administration (FDA) is acting to combat it, having recently raided the headquarters of E-Cigarette manufacturer Juul. The raid, which occurred Friday, September 28, 2018, was intended to search for documents regarding “sales and marketing practices,” particularly in regard to the marketing of e-cigarettes to teenagers. The raid resulted in the acquisition of thousands of documents.

Due to a lack of regulation and strong social media presence, Juul products have become a popular topic on Instagram, especially for teens. In fact, Juul e-cigs have become so popular many users have turned the act of vaping an e-cig into a verb: juuling. To make matters worse, Juul’s nicotine solutions (vaping liquids) also have significantly higher amounts of the drug than other brands.

The FDA is moving on the issue, spurred by letters from senators and lawsuits from special interest groups. They’ve not only floated the idea of banning flavored vaping liquids, but have also demanded the five largest nicotine manufacturers in the U.S. to send reports and documentation of their marketing practices for review. The concerns revolve around the illegal marketing and sale of nicotine and tobacco products to minors.

Do The Risks Outweigh The Good?

While vaping certainly has its own health risks – critics point out the chemicals used to flavor vaping liquid can cause the lasting illness bronchiolitis obliterans, or popcorn lung – many remain skeptical as to the FDA’s actions.

E-cigarettes have been lauded for their ability as tools to help adults taper off cigarettes, first by removing the health hazards of smoking tobacco and then by gradually reducing the nicotine dosage.

However, teens have reported being unable to quit once they start. Scientists have confirmed that the teenage brain, still in the midst of developing, is uniquely susceptible to addiction, and doses of nicotine could turn teens into lifelong users.

Though the CEO of Juul, Kevin Burns, has restated his cooperation with the FDA’s investigation and his commitment to keeping his company’s product out of the hands of minors, only strong federal regulation of the industry is likely to produce long-term results.

Talk to Us:   Have something to share? Curious what others are saying about nicotine and tobacco? Head to the DrugAbuse.com Community Forum and sound off.