Substance Use at Live Music Events

If you’re gearing up for a music festival, there are some things you probably want to ensure you have with you. Most veterans will recommend not leaving the house without comfortable shoes, sunscreen, and a bottle of water.

Unfortunately, something else can make its way into the crowd. In fact, alcohol and drug use have become so prevalent among music festivalgoers that third-party companies now sneak in testing kits to ensure that what attendees consume isn’t contaminated with deadly and unknown additives.

So just how common are drugs and alcohol at live music events? To find out, we surveyed over 970 people about their substance use, their average age when first consuming alcohol or drugs at music events, and why they chose to use these substances at live music events. Continue reading to see what we learned. 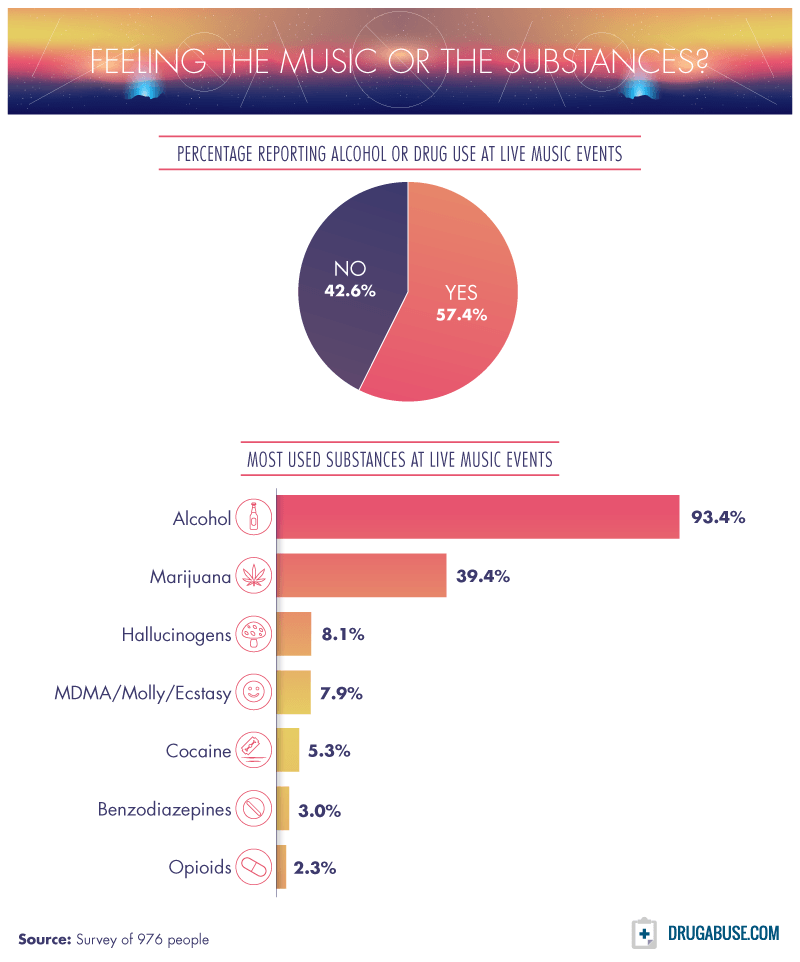 Music festivals have a deep-seated history with alcohol and overconsumption. To further complicate the matter, sneaking alcohol into music festivals has made it much harder for organizations to monitor and institute consumption policies.

Fifty-seven percent of people attending live music events admitted to using alcohol or drugs, with more than 93 percent consuming alcoholic beverages. However, drinking alcohol could do more than just cause inebriation. For most festivalgoers, staying hydrated is often a primary concern due to exposure to the elements and alcohol can exacerbate this problem. In fact, alcohol can cause the body to lose fluid and electrolytes through urine, vomiting, and diarrhea.

Additionally, nearly 40 percent of people used marijuana at live music events, followed by 8 percent who each used hallucinogens or MDMA (commonly referred to as Molly or ecstasy). 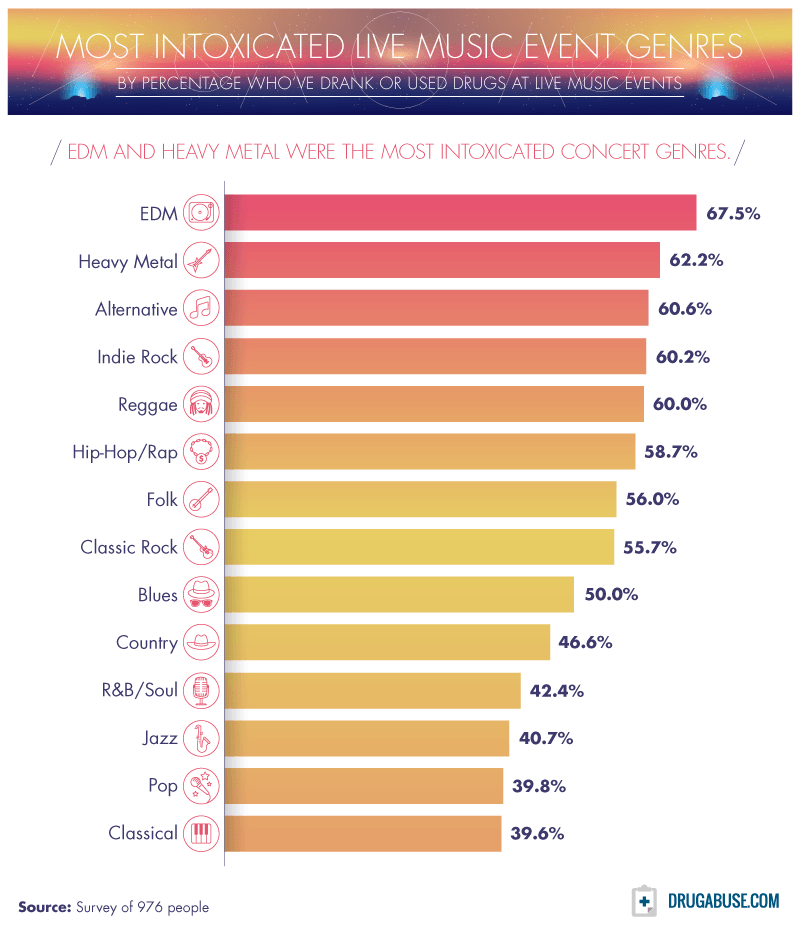 Electronic dance music (EDM) may be one of the fastest-growing music genres (especially at summer festivals), but it’s long been associated with a culture of illicit drug use. According to our survey, more than two-thirds of people who attended an EDM festival admitted to consuming either drugs or alcohol at the show. In fact, the misuse of certain substances, like MDMA or ketamine, has even lead to fatalities. Specifically, in Los Angeles, there have been at least 25 drug-related deaths associated with EDM festivals in the last 10 years – and that number is only expected to climb. 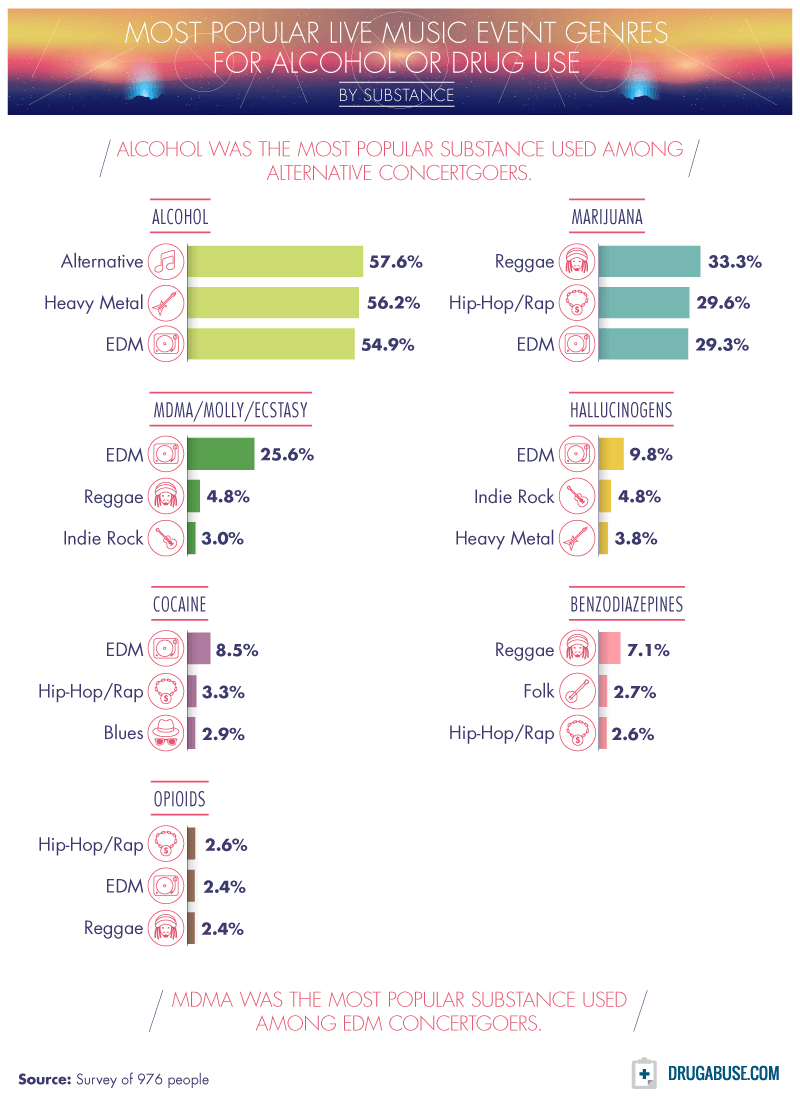 Despite the well-known negative effects of drinking alcohol at live music events, more than half of people attending alternative rock, heavy metal, and EDM concerts said drinking was a part of the experience.

No drug was more connected with various music genres than marijuana, however. While there are negative short- and long-term side effects associated with cannabis – such as affected brain development in young people and impaired body movement – one in three people attending reggae festivals admitted to using marijuana, followed by nearly 30 percent of people at hip-hop or EDM shows.
Roughly one in four people linked their EDM festival experiences to MDMA. Ecstasy, while considered a party drug, has been linked to heart disease, depression, and sleep disturbances. EDM shows were also popular places for cocaine use (nearly 9 percent) and hallucinogens (almost 10 percent).

More Than Just a Number 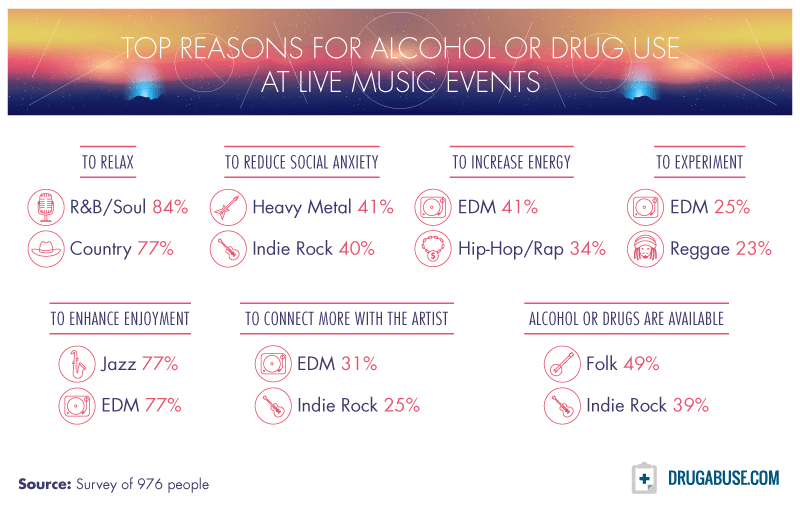 Considering the dangerous effects of drug and alcohol use at these events, we asked people what compelled them to experiment in the first place.

In some cases, particularly among R&B/soul and country music festivals, the primary goal was simply to relax. Two in five people attending heavy metal and indie rock shows admitted they used drugs or drank alcohol to reduce feelings of social anxiety, and 77 percent of people going to jazz or EDM shows did it to enhance their enjoyment. Three in ten EDM festivalgoers also reported using drugs or alcohol in order to connect more with the artist they went to see. In many cases, anxiety and feelings of depression become co-occurring disorders when linked with substance abuse and addiction. While the consumption of drugs or alcohol may appear to abate the symptoms at first, long-term use requires a higher dose to help recreate those effects, leading to unhealthy tendencies.

Staying Sober Throughout the Show

People may think using drugs or alcohol will enhance the enjoyment of their live music experience, but substance abuse can lead to some devastating consequences. In 2017, the number of deaths involving all drugs increased from 63,632 in 2016 to 72,306. It’s OK to want to let your hair down at live music events – but one can still enjoy live music experiences sober.

If you or someone you know is currently dealing with substance misuse issues, there are tools and resources available to provide information and assistance – from knowing the signs and symptoms of drug use to seeking professional help with treatment. To learn more, visit us at DrugAbuse.com.

We surveyed 976 people about their drug and alcohol usage at live music events. Fifty-one percent of respondents were female, and 49 percent were male. Respondents ranged in age from 18 to 82 with an average age of 37 and standard deviation of 12. Hypotheses were not statistically tested. The study is purely exploratory and relies on self-reported data, which is subject to many factors that could potentially reduce accuracy, including but not limited to the following: selective memory, telescoping, attribution, and exaggeration.

Live music events are best enjoyed without the interference of drugs or alcohol. If you think your readers will agree, please share this project for non-commercial purposes. We only ask that you ensure a link back to this page so that our authors receive proper credit for their work.