The State of Alcohol In America

These days, picking your poison can get pretty complicated. Americans are drinking more frequently and intensely than ever before and selecting from an ever-expanding array of options. The craft beer explosion continues—there are more than 5,200 active craft breweries and counting—and liquor brands are cashing in on the “premiumization” trend, marketing exotic product varieties touting high-quality ingredients. The days of haphazard boozing are over—now even casual drinkers can be as selective as connoisseurs.

But for all the drinking possibilities Americans have, where do their allegiances truly lie when it comes to their preferred forms of booze? We took to social media to find out, studying millions of Instagram posts from every state to see which alcoholic beverages are mentioned most often. Our findings shed new light on America’s taste in alcohol and show how regional drinking preferences vary. To see how each state classified, keep reading. 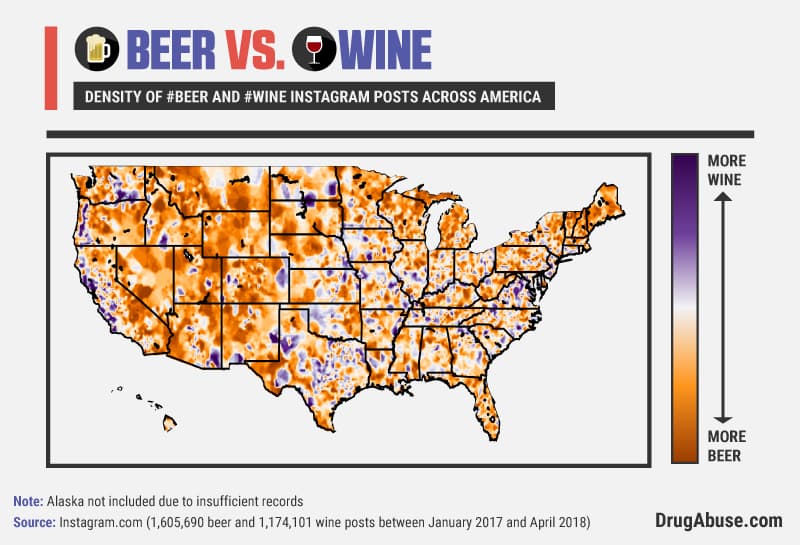 We first studied how Instagram users in each state navigate the classic choice for casual boozing: beer or wine? Our data were definitive: In all but three places, users posted more often about brews. This result indicates that posting activity roughly mirrors real consumption habits, with recent polls suggesting beer remains the alcoholic beverage of choice for most Americans. In some of the states with the greatest portion of beer-related posts, craft beer culture may drive Instagram activity. Vermont, Alaska, Maine and Colorado have some of the highest brewery-per-capita rates in the country. 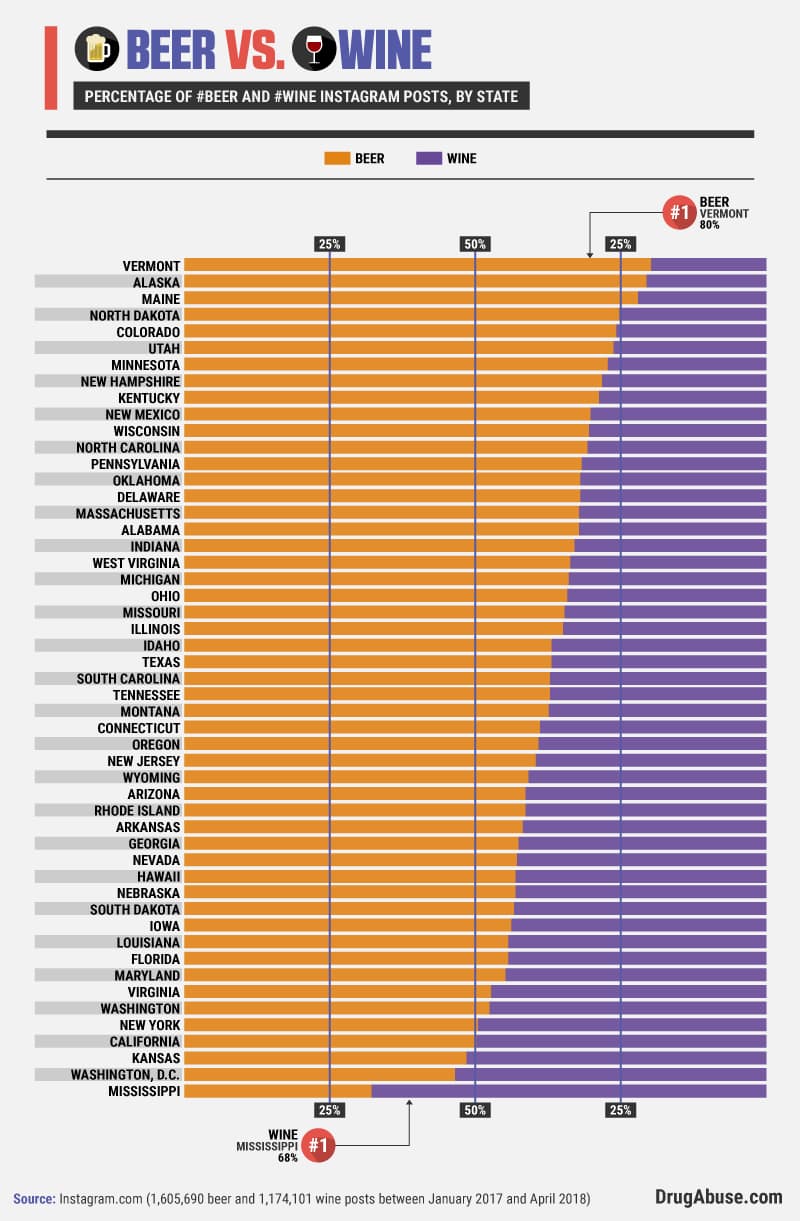 Posts with #beer even outpaced (ever so slightly) those featuring #wine in California, which accounts for roughly 86 percent of U.S. wine production. Indeed, the few places where wine prevailed were a potentially unexpected bunch: Mississippi, Washington, D.C. and Kansas. Our nation’s capital may owe its Instagram activity to the emergence of a recent trend: New wine bars with Insta-worthy vibes have been popping up across the city. 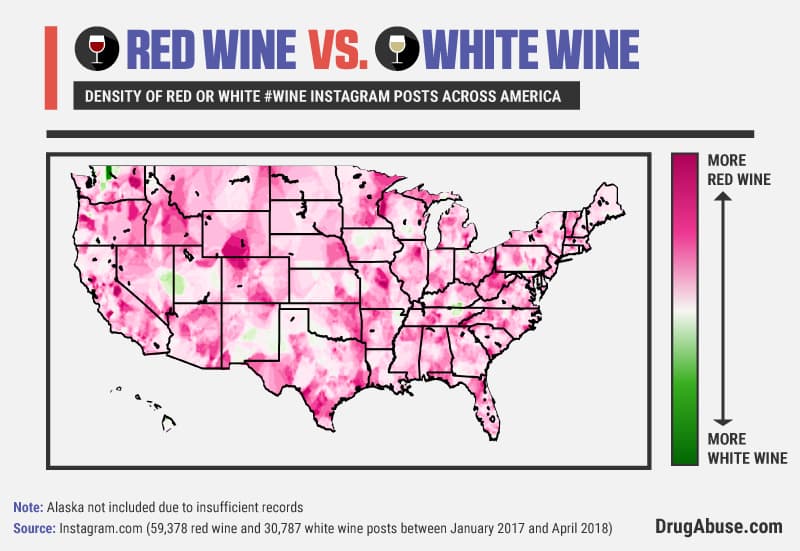 Our analysis also shed light on another choice often posed to drinkers: red or white wine? In all but one state, red wine posts were more common than those about white varietals. Perhaps seasonal drinking patterns explain this dynamic: White wine is often associated with warmer months, whereas reds are consumed year-round. Indeed, balmy New Mexico was the only exception to red wine’s Instagram dominance, and the two states with the heaviest red wine post patterns, Alaska and Vermont, are well-known for their chilly climates throughout much of the year. 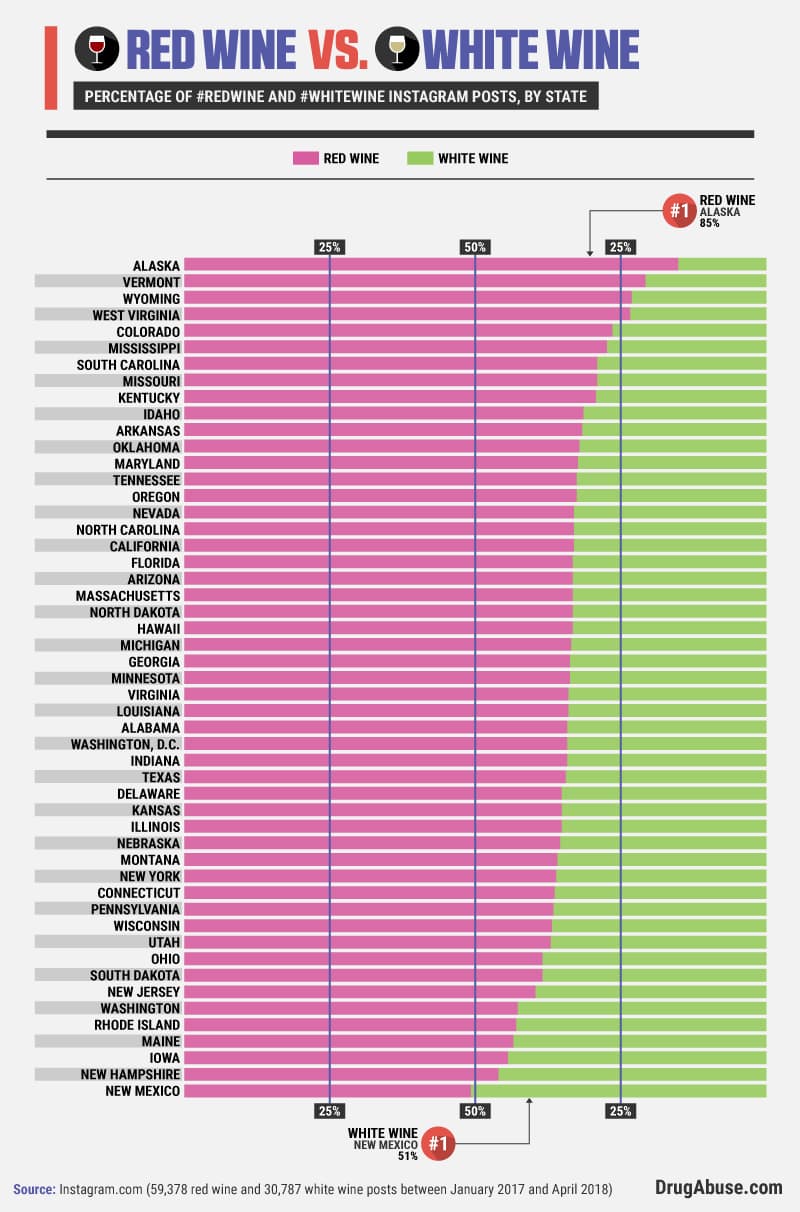 On the other hand, some New England states seemed relatively receptive to white wine, including New Hampshire, Maine and Rhode Island. This finding proves white wines can still be relatively popular in colder locales, and experts project increased interest in varietals such as prosecco and chardonnay in the years to come. According to emerging research, however, perhaps Americans should be grateful for their devotion to red: though drinking in excess can always pose health risks, red wines have been linked to body benefits including a lower incidence of heart disease. 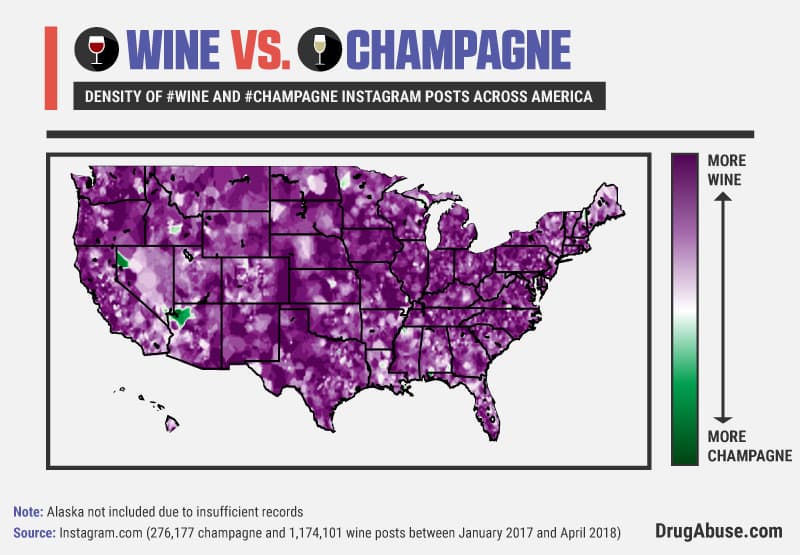 Perhaps it’s no surprise red wine posts outnumber Champagne pics in every state—ostensibly, we drink the bubbly stuff less regularly, reserving it for special occasions. Conversely, however, those special occasions are precisely the sort of events one might commemorate with an Instagram post. Indeed, the most Champagne-friendly states seem well-suited to indulgence. Champagne might as well be the official drink of Las Vegas, and Hawaii’s scenic settings lend themselves to midnight toasts and mimosas the next morning. 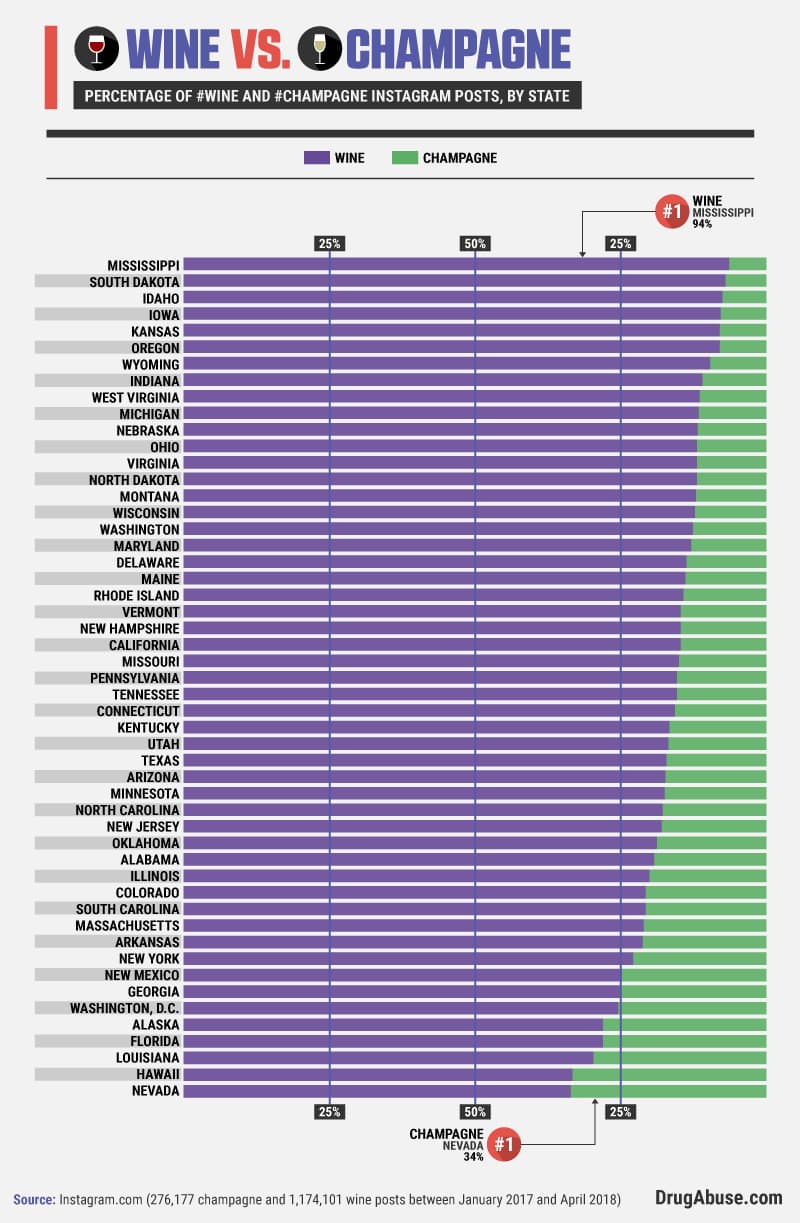 Champagne was rarely found in posts from much of the Northwest: Idaho, Oregon and Wyoming were among the states that favored wine most thoroughly. Similar, many Midwestern states had relatively few Champagne posts, including South Dakota, Iowa and Kansas. But wine posts surpassed Champagne-related Instagram activity to the greatest extent in Mississippi. That result is particularly striking given the pattern evident in some of that state’s neighbors: Alabama, Arkansas and Louisiana fell on the Champagne-friendly end of the spectrum. 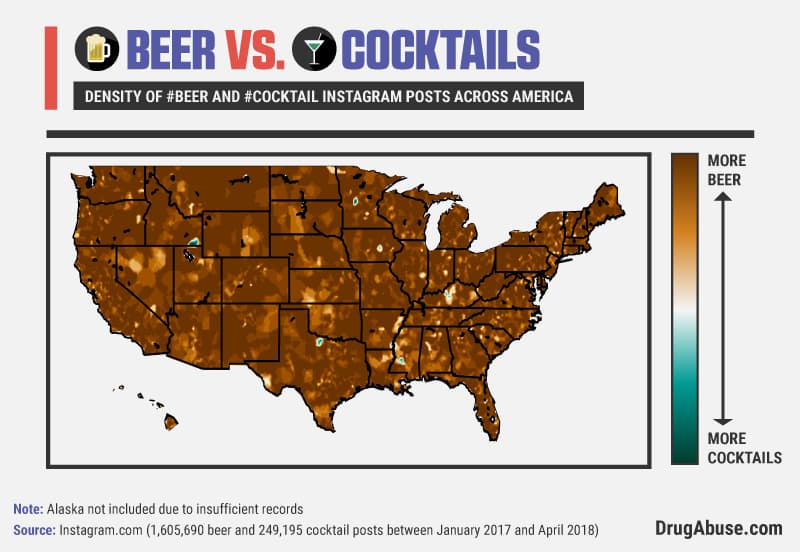 When we pitted the casual beer against the classy cocktail, brews prevailed in every state. Yet in the few places where cocktails represented a significant portion of posts, that fact seemed to reflect some essential aspect of local drinking culture. In D.C., for instance, the most cocktail-centric location, one can imagine well-heeled power brokers mingling over mixed drinks. In Louisiana, cocktails may have a more raucous connotation, thanks to the boozy traditions of Bourbon Street. 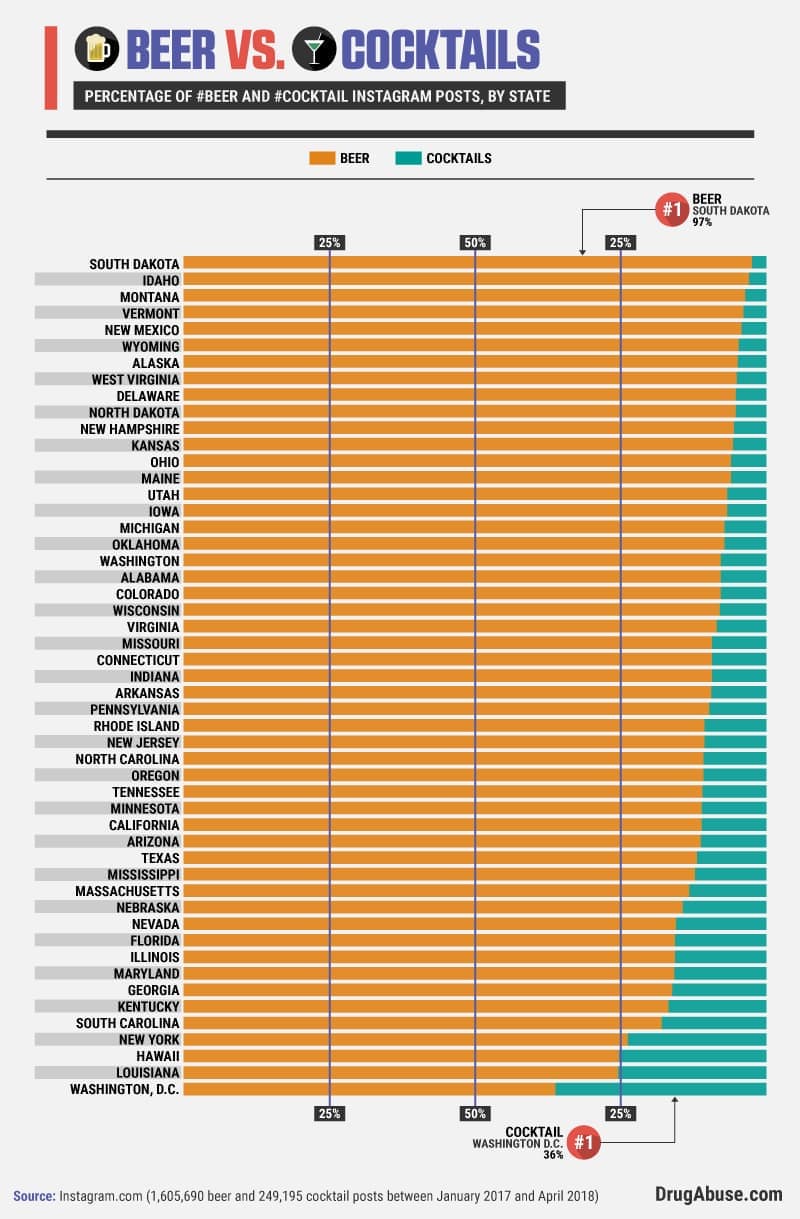 On the opposite end of the spectrum, cocktails rarely appeared in posts from such places as South Dakota, Idaho and Montana. Many of these places match their Instagram activity with their actual intake, consuming plenty of beer per capita. The common thread among these beer-heavy states is rural terrain. Perhaps their beverage selection speaks more to access than preference: liquor and mixers may require a lengthy trip to town, whereas beer can often be purchased at the nearest gas station. 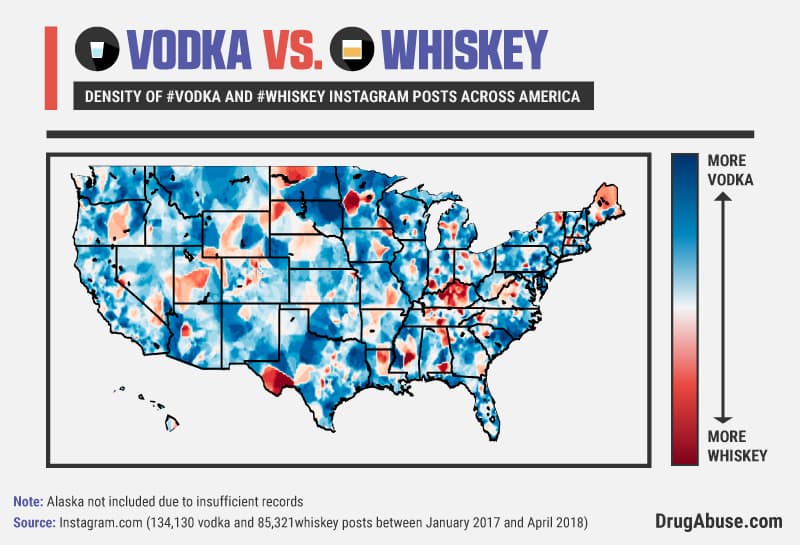 If you’re going to be drinking the hard stuff, there’s a good chance you’ll be sipping either whiskey or vodka. And according to our analysis, the clear stuff is more popular in posts from all but seven locales. Many attribute vodka’s popularity to what it lacks: a strong taste that might repel occasional drinkers. On the other hand, vodka is produced in dozens of flavor varieties, and that assortment of tastes might appeal to broad swaths of the public. 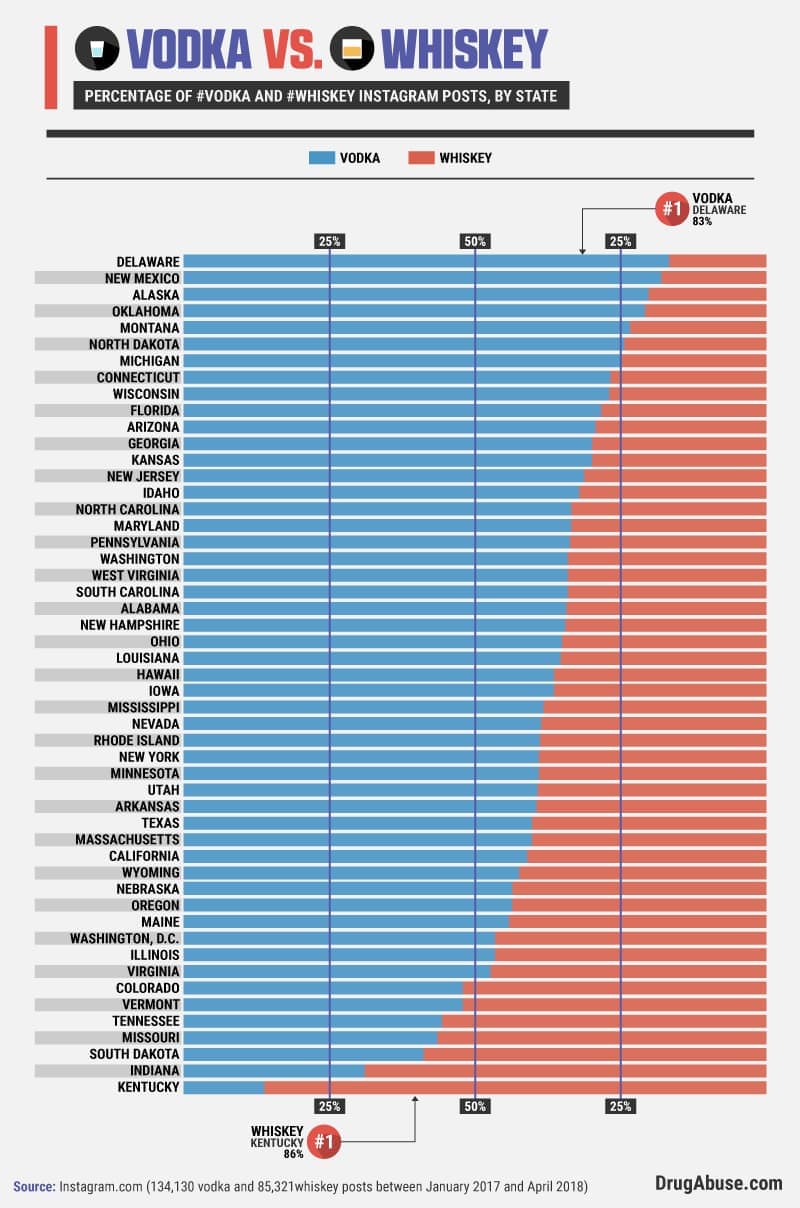 Whiskey’s appeal was obvious in bastion of brown liquor: Kentucky, where bourbon tradition runs deep, outpaced all other states in whiskey posts. Indiana, which had the second-highest percentage of whiskey posts, may be toasting its liberation from long-standing liquor laws: Until 2018, it was illegal to buy alcohol at stores on Sunday. The other top whiskey states were scattered across the country, indicating the spirit’s popularity transcended any single region.

When Drinking Stops Being Social

If our results convey anything, it’s that alcohol is a fixture of Instagram culture. And if social media is any measure of our nation’s habits, we’re particular and enthusiastic about the booze we choose. But whichever variety of alcohol we prefer, responsibility must be our priority. Though social media posts accentuate the highlights of hard partying, excessive drinking can lead to tragedy as well.

If a loved one is struggling with drinking—or if you’re experiencing problems with alcohol yourself—know that effective help is available. But without expert advice, taking the first steps toward recovery can seem daunting. Let our team at DrugAbuse.com help you or your loved one navigate the challenges of choosing sobriety. With proven treatment methods and ongoing support, freedom from substance abuse is possible.

We collected information on public posts from Instagram.com ranging from January 2017 to March 2018 surrounding the following hashtags: #beer, #champagne, #cocktail, #whiskey, #vodka, #wine (for red and white wine, we looked for mentions of each from within #wine post captions). Posts without geolocated information or those that were outside of the United States were removed. The following number of posts were analyzed for each:

For each of the map assets above, we ran the posts through a density mapping API, which demonstrates the fraction between each comparison.

Feel free to show our results and graphics to your own online audience, so long as you do so for noncommercial purposes. If you do share this project, please simply provide a link to the page to credit our team appropriately.

How to Get Help for Alcohol or Drug Misuse

If you or a loved one is struggling with substance misuse, it may be time to seek help. Professional alcohol and drug treatment programs can help you face life’s challenges without the use of substances. You can contact an admissions navigator with American Addiction Centers for free at at any time, day or night, to learn more about alcohol addiction and treatment. You can also check your insurance coverage online now or contact free alcohol hotline numbers.

Levels of Care in Addiction Treatment