A town in Germany converted confiscated marijuana into a valuable source of energy.

What happens to confiscated pot? Does it go to Mary Jane jail somewhere? Is it donated to hospitals for medical research? Does it get tossed into the high seas?

In the U.S., officials turn to several different sources for disposal of confiscated drugs. The DEA uses EPA-approved incinerators. State police, on the other hand, turn to local forging plants, department incinerators, steel facilities, and private contractors for assistance with their disposals. Over the years, local law enforcement agencies have used everything from large steel drums to crematories and hospital incinerators for drug disposal.

However in Germany, confiscated pot is fueling the economy – literally. Recently, one giant stash of impounded weed was used as a source of energy. This unique method of disposal was designed by customs officials in Munich. They wanted a way to get rid of over 1,000 pounds of seized marijuana, hopefully putting all that weed to good use.

In need of an alternative solution, officials turned to the Olching power plant.

Opportunities From a Large Marijuana Bust 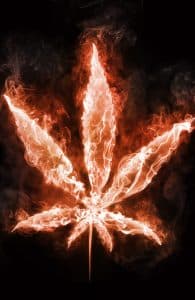 Customs officials took 60 boxes and nearly 500 bags of marijuana to a power plant in Olching, an area northwest of Munich. There, they burned the marijuana in a way that produced energy – namely heat and electricity – for local residents.

This marijuana, which would fetch $3 to $6 million on the street, was originally confiscated from a truck in Serbia at the end of 2016. Current laws in Germany permit the medical use of marijuana with a prescription. (Obviously, this mountain of weed went far beyond the amount allowed for personal use.)

Authorities commandeered the pot and arrested the driver.

The black-market pot was dried and tested, and officials determined it couldn’t be used for medical purposes. Generally, when this determination is made, confiscated cannabis is scheduled for incineration. However, this batch was too large for normal methods.

On the day of the burning, armed customs officers delivered the marijuana to the factory. Plant operators then burned the bud at temperatures between 1,652 and 1,832 Fahrenheit. These high temperatures reduced the risk of intoxication from the fumes.

All in all, their solution was quite clever. It got rid of what amounted to a pile of trash cluttering up the customs office and provided a source of electricity and heat for local residents. You could say the customs officers in Germany have taken that old adage, “one man’s trash is another man’s treasure” to a new level.

Perhaps a more appropriate saying would be “one man’s pot is another man’s power.”