Authored By Kerry Nenn
Leave a Comment :: Posted to: Drugs and Society, Drugs and the Law

California bans the sale of cannabis and alcohol together or at the same location.

Alcohol is legal in California. Now, recreational use of marijuana is, too. Does that mean Californians will be allowed to sit at their favorite bar stool and consume a cocktail and cannabis?

The question has definitely come up among residents and business owners in the state. Owners of licensed establishments want to know exactly what they can and can’t offer their patrons, and patrons want to know what offerings they can expect from businesses. To clarify these issues, the Department of Alcoholic Beverage Control (ABC), which licenses California establishments, released an FAQ for guidance.

The top question addressed by the ABC is whether or not an establishment that holds licenses both to sell liquor and to grow, process, or sell cannabis can offer both substances to customers. The short answer: no.

The long answer: While a person can hold licenses under both the ABC and the Medicinal and Adult-Use Cannabis Regulation and Safety Act (MAUCRSA), he or she cannot offer both alcohol and marijuana to customers at the same location. MAUCRSA states that a licensee “shall not sell alcoholic beverages or tobacco products on or at any premises licensed under this division.” 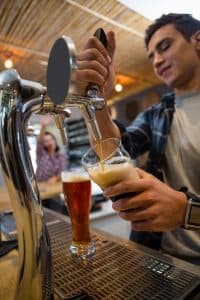 Does this mean customers could bring in their own cannabis to the establishment? No. The ABC closes this loophole with Health and Safety Code section 11362.3, which prohibits smoking or ingesting cannabis in public places. Since all businesses licensed under ABC are considered public places, this makes the use of cannabis or cannabis products in these establishments forbidden. It doesn’t matter who provides it. It can’t be consumed at the business. The ban includes after-hours use of the establishment, such as private parties, as well.

But…what about drinks that contain cannabis? This is also prohibited. Since cannabis and alcohol can’t be sold on the same premises, cannabis cocktails are not permitted. Additionally, the California Department of Public Health has banned “the sale of edible cannabis products as alcoholic beverages.”

What about those wine and cannabis pairing events we’ve heard about? They may be happening somewhere, but they aren’t legal at ABC licensed establishments. The ABC Act clearly prohibits the public consumption of cannabis and cannabis products, so these events are not legit under current California regulations.

With new laws regarding cannabis use constantly hitting the books, these regulations could change in the future. But, for now, Californians who want to mix marijuana and margaritas at their local bar are out of luck.

Talk to Us:   Have something to share? Curious what others are saying about marijuana? Head to the DrugAbuse Community Forum and sound off.

Kerry Nenn has a BSW in social work and psychology. She is a freelance writer who has written articles for various American Addiction Centers websites.