Written by: Lauren Villa, MPH
On This Page

Because unintended pregnancies are common in the United States, women may be using heroin and other substances without realizing that they are pregnant 2. Heroin can cause serious harm to a woman’s body, and it can also significantly harm her baby.

If you are a woman of reproductive age and you are either pregnant or not actively preventing pregnancy through birth control and using heroin, consider getting help. You deserve to be healthy and so does your child. Call 1-888-744-0069 for assistance finding a drug addiction rehab program today.

Effects of Heroin Use on the Mother

Heroin use during pregnancy is a major public health concern,  with the potential to result in serious maternal and neonatal health issues. Using a drug like heroin can eventually compel a person to prioritize the drug over important issues like hygiene and proper nutrition, which can give rise to numerous issues during pregnancy.

Heroin-addicted mothers also tend to have poor attendance rates at prenatal visits 8. Prenatal care is vital for any expectant mother, and may be even more essential for women using heroin due to the high risk for pregnancy complications, such as 3 4 5:

Additionally, heroin is a dangerous drug because it is associated with serious physical, mental and social repercussions that negatively impact the mother and, consequently, the fetus or developing child. These include 3:

Effects of Heroin on a Developing Fetus

Heroin can easily cross the placental barrier. This means that when a woman injects, inhales, or smokes heroin, the drug is passed along to the baby, presenting numerous risks and the strong possibility the baby will become dependent on the drug.

Taking drugs such as heroin can lead to a number of health issues related to pregnancy, including but not limited to 6:

Heroin use can also be deadly to the developing fetus or the newborn baby. Aside from increased miscarriage risk due to complications like placental abruption, illicit drug use during pregnancy increases the risk of stillbirth (death of a baby in the womb after 20 weeks of pregnancy) by 2 to 3 times 13.

Illicit drug use also increases the chances of sudden infant death syndrome (SIDS, or crib death) 6,13. This refers to the unexplained death of a baby who is younger than 1 year old 11. 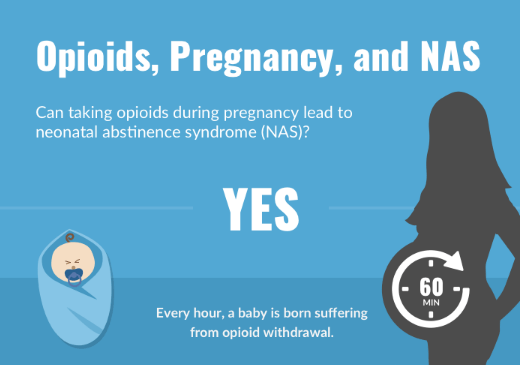 When a woman uses an opioid like heroin during pregnancy it can cause her baby to develop neonatal abstinence syndrome (NAS). NAS is a set of behavioral and physical signs in the newborn that result from abruptly cutting off a baby’s opioid supply once the child is born. Studies show that anywhere from 48-94% of babies exposed in utero to heroin will experience withdrawal at birth 3.

Symptoms of NAS usually occur within the first 1-3 days after birth; however, they may appear up to a week after birth 12.

Characteristics of NAS include but are not limited to 12:

In the most severe cases, NAS can cause seizures and death. When a baby is born with NAS, they will usually need to be hospitalized and treated with medication (typically, another opioid medication like morphine or methadone) to relieve the withdrawal symptoms 13. The medication is gradually tapered as the baby adjusts to not having heroin in their system.

Although the effects of heroin use in utero have been well documented, less is known about the long-term effects on the developing child. However, some studies show that exposure to heroin in utero is associated with the following characteristics later in life 14 15 16:

If you are pregnant and use heroin, call your doctor to find out the best way to keep you and your baby safe. If you are interested in treating your substance use disorder, give us a call 1-888-744-0069 and a rehab placement specialist can help you.

When a woman quits opiates cold turkey while pregnant, her fetus goes through a period of withdrawal. The fetus is not able to tolerate the effects of withdrawal as well as the mother and this may result in the death of the fetus 17. Because of this risk, it is important to talk to your doctor before attempting to quit using heroin on your own.

Pregnancy offers a window of opportunity to enter treatment and live drug-free. Data collected by the Substance Abuse and Mental Health Services Administration (SAMHSA) found that pregnant women use lower amounts of drugs, such as heroin, during the third trimester than they do the first and second trimesters (2.4 percent vs. 9.0 and 4.8 percent) 1. This data suggests that by their last trimester, more women have stopped using harmful substances.

While therapeutic options may vary on an individual basis, many women quit using heroin during pregnancy through a combination of medication-assisted treatment and counseling.

Used since the 1970s, methadone is a time-tested method of medication-assisted treatment during pregnancy. Although methadone is the standard of care in most of the world and most doctors will prescribe it to women who are using heroin during pregnancy, it is important to note that methadone is still an opioid, and there are risks of using methadone when pregnant.

Methadone can easily cross the placenta and enter the baby’s bloodstream, increasing the risk that the baby will be born with neonatal abstinence syndrome. Researchers are investigating the potential to use buprenorphine and naloxone (i.e., Suboxone) instead of methadone 18 19. Research is still emerging, and one study found that babies born to mothers who were treated with buprenorphine and naloxone had less incidence of NAS and shorter hospital stays 20.