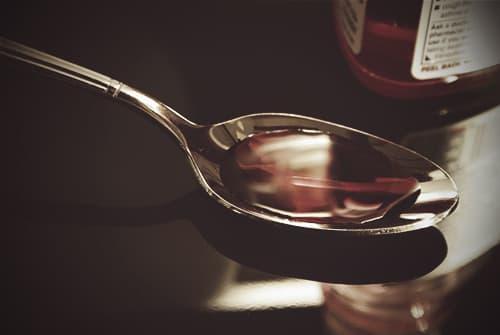 Dextromethorphan (DXM or DM) is a cough suppressant and opioid derivative used in more than 100 over-the-counter medicines.

Dextromethorphan is safe for ingestion and not habit-forming when taken as directed; however, illicit and excessive use of DXM has recently risen, and this type of use has negative effects.

While not physically addictive when taken in recommended doses, DXM has the potential to be addictive if:

Additionally, a user may also begin to obsessively crave using the drug between bouts of compulsive use or repeated intake of large amounts.

Some users will drink cough syrup with dextromethorphan in combination with alcohol or in the absence of the availability of alcohol (e.g. in some Robitussin formulations). Also, some users will actually purchase DXM in pill or powder form, such as Coricidin HBP Cough and Cold tablets, and snort or inject it.

When taken in excess doses and via alternative methods, DXM can actually act as a dissociative anesthetic, mimicking the effects of drugs like PCP and Ketamine, a “date-rape” drug.

There are several dextromethorphan problems that can occur from abuse. The most alarming risks are serious illness or death.

Severe illness or death is not necessarily caused by the misuse of dextromethorphan by itself. However, serious illness and death can result from the effects of the combination of DXM with other active ingredients found in multi-symptom cold medications.

These ingredients include acetaminophen (Tylenol), chlorpheniramine (an antihistamine), pseudoephedrine (a decongestant), and phenylephrine. Abuse of medicines that contain these active ingredients in combination with DXM can cause the following: Typically, someone who has been using dextromethorphan long-term and suddenly quits will experience withdrawal symptoms including:

Those who have abused dextromethorphan in high doses for a long period of time may experience toxic psychosis and other permanent psychological issues.

There are several treatment options available for dextromethorphan addiction, including:

To learn how to begin the process of healing, call .

The statistics above illustrate the danger of dextromethorphan as well as the fact that it is common amongst young people. DXM appeals to teens due to the ease of access and low cost. In fact, 10% of teenagers have abused cough medicines (many which contain Dextromethorphan) to get a high.

You can prevent dextromethorphan abuse by taking the following actions:

Discussing the negative effects of dextromethorphan abuse (and drug abuse in general) is one of the best ways to prevent teen drug abuse.

To learn more, see the following pages on DMX:

Additionally, you can speak to others about this issue by joining our DrugAbuse.com Forum today.