Fentanyl, a drug previously unheard of by many, has become notorious in recent years due to the spike in overdose deaths from heroin laced with the potent prescription narcotic. It gained even more notoriety when the April 2016 death of iconic singer, Prince, was attributed to an accidental fentanyl overdose.

As an extremely strong painkiller that produces effects similar to heroin, fentanyl has made its way from the hospital to the street, and the consequences are often deadly.

Where Does Fentanyl Come From?

Opiates are derived from the opium poppy plant, nicknamed the “flower of joy.” There are roughly 20 different opiate alkaloids that are derived from the plant, including heroin, morphine, and codeine. Opioids are a class of drugs with similar pharmacological properties to opiates; however, the opioids are either partially or fully synthetic substances 9.

The human body produces its own supply of opioid peptides. Perhaps the most commonly known are the endorphins (the others are the enkephalins and dynorphins). Endorphins bind to opiate receptors in the body, blocking pain. If you get hurt, your body will release endorphins to provide you with pain relief.

When opiates and opioids bind to opioid receptor sites throughout the brain and spinal cord, they influence how a person perceives pain, effectively diminishing the pain signal sent from the body to the brain. In essence, opiate and opioid drugs don’t make your pain go away, they just change the experience of pain.

The United States is in the middle of a fentanyl public health crisis. Today, there is more fentanyl available than at any other time since 1959 when the drug was first created. From 2013 to 2015, the Drug Enforcement Administration (DEA) seized 239 kilograms of illegal fentanyl 3. Although this may seem small compared to the amount of other illicit substances seized by authorities, fentanyl is more lethal than many of these other drugs because even an extremely small dose (2 milligrams) can be fatal 3.

Illegal, non-pharmaceutical fentanyl (NPF), also called illicitly manufactured fentanyl (IMF), is made in clandestine labs. NPF is sold illegally, and it is highly sought after because it produces heroin-like effects 1 and can be cheap for manufacturers to make. On the street, it is sold under various names, such as “China Girl” and “China White” 4.

NPF is often laced with heroin or cocaine without the buyer’s knowledge. This phenomenon of adding chemical adulterants to street drugs contributes to the rising number of fentanyl-related deaths in the United States because users are unaware of their drug’s potency 5. According to the Centers for Disease Control and Prevention (CDC), in 2015, 55% of people who died from an overdose of fentanyl additionally tested positive for heroin or cocaine, compared to 42% between 2013 and 2014—a concerning uptick that may reflect an increase in the widespread availability of an adulterated street product.

Within the illegal drug market, fentanyl provides the opportunity for manufacturers and dealers to make a substantial sum of money. A kilo of NPF is reported to sell for roughly $1.3 million dollars, whereas a kilo of heroin will sell for a relatively mere $271,000 3. 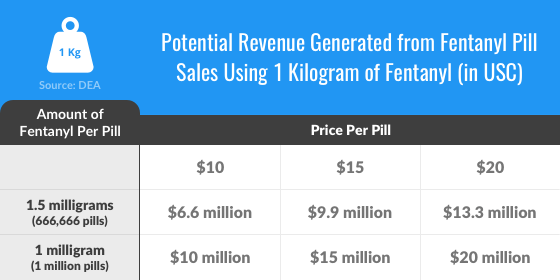 While some people knowingly seek out fentanyl for its extremely potent high, fentanyl use often occurs unwittingly, as it is often disguised as heroin or other opioid narcotics 1. Those believing they are buying their normal drug of choice (e.g., heroin) may be getting a substance that is much stronger than their bodies can handle.

Fentanyl can heighten the potency of heroin and lead quickly to fatal respiratory depression. It may also compound the toxic influence of cocaine.

Some buyers may hear of certain brands of heroin as being potent or a strong high and use it without realizing fentanyl has been added to it. This can result in immediate overdose, especially if someone uses their normal amount and expects the same effects.

Opioids like fentanyl work directly on the respiratory center of the brainstem. This can result in a depression of a person’s ability to breathe properly. In the case of fentanyl, it can kill a person rapidly by paralyzing muscles in their chest that help them breathe <10. This effect is called sudden onset chest wall rigidity, or “wooden chest”.

Is Fentanyl Deadlier than Heroin?

What Does Potency Mean?

Opioid medications work by attaching to opioid receptors in the brain, producing the therapeutic pain-relieving effect. Potency at a receptor level is measured as the amount of the opioid necessary to elicit the intended response.

The amount of fentanyl required to provide an equal painkilling effect to that of 10mg of morphine is a mere 0.1 mg (or 100 millionths of a gram)—making fentanyl 100 times more potent than morphine 12 and extremely dangerous for non opioid-tolerant individuals.

Although heroin is known as one of the most dangerous and addictive drugs on the market, fentanyl is even more potent and can cause rapid death.

Fentanyl’s popularity among illicit drug manufacturers and some opioid users has skyrocketed in recent years due to its ability to provide a profoundly intense euphoric high. However, this high can easily turn deadly.

The risks inherent to any form of opioid abuse, such as respiratory depression and coma, are not only present with fentanyl, but are even higher as a result of the drug’s potency.

First-time (or drug-naïve) users are especially susceptible to overdose risks. Fentanyl can be deadly any time it is used, but may be especially so in those who’ve never used it, or have opioid tolerances adjusted for lesser potency drugs (including even heroin). In fact, in March and October 2015, the DEA and CDC issued alerts that illegally manufactured fentanyl (IMF) is a threat to public health and safety. This was due to the spike in the number of fentanyl-related deaths in 2014 1.

Fentanyl is extremely dangerous not only to users, but to first responders, as well. This stems from the fact that fentanyl can easily absorb through the skin when it comes in direct contact with it, and it can also be inhaled as a powder. During a field test, police officers reported feeling dizzy and short of breath after coming into contact with a substance containing fentanyl 6.

Overdose is a major concern for those abusing fentanyl. While there is an “antidote” treatment helpful in the event of a fentanyl overdose, action must be taken extremely quickly. In many cases, fatal respiratory depression occurs too quickly before help can intervene.

Fentanyl was responsible for more than 700 deaths in the span of one year, and the DEA noted that the actual number may potentially have been higher since many coroners’ offices do not specifically test for fentanyl 6. 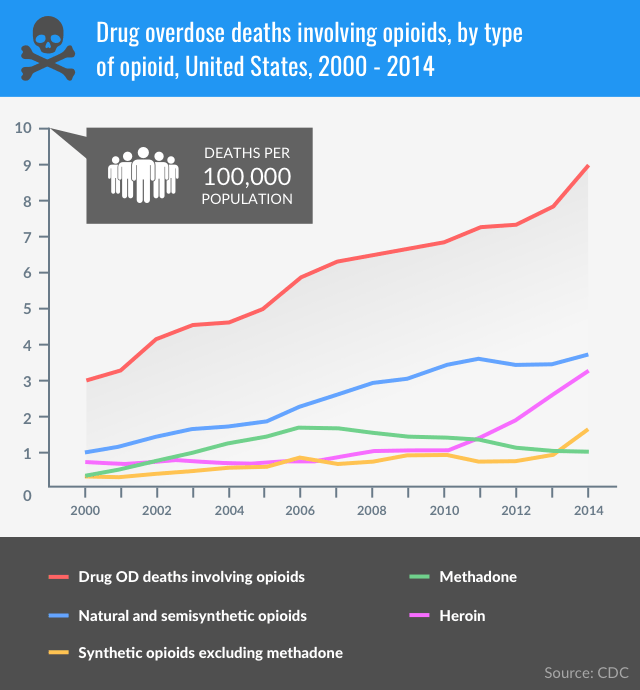 Due to rising numbers of overdoses from fentanyl and other opioids, the CDC recommends that law enforcement officers and first responders increase the amount of naloxone they have on hand.

Naloxone (brand name: Narcan) is an opioid antagonist. Naloxone temporarily blocks opioid receptor sites in the central nervous system. Naloxone can reverse the potentially fatal effects of fentanyl. While naloxone doesn’t always immediately reverse an opioid overdose, it can help victims to regain consciousness so they can breathe on their own.

If a person is given naloxone and they slip back into unconsciousness, medical personnel may continue administering the drug so that the person can breathe again. If a person overdoses from a high dose (or multiple doses) of fentanyl, it may require multiple doses of naloxone to reverse the effects.

Naloxone is administered through 9:

Naloxone may also be administered subcutaneously (SQ), should lack of IV access be an issue, or via an endotracheal tube (ET), if airway management has already begun.

Repeated use of naloxone can be fatal in individuals who develop pulmonary edema.

The CDC and DEA have called for increased access to naloxone, especially among community members. In Ohio, emergency medical services responded to 82% of fentanyl deaths—and there was at least one bystander at the scene in 72% of those cases. Reportedly, only 41% of people who died from a fentanyl overdose received treatment in the field with naloxone 1. Providing better access to naloxone can prevent tragic numbers of fentanyl overdoses.

Fentanyl and the Opioid Epidemic

In recent years, there has been an increase in the number of prescriptions for opioid painkillers written, as well as the number of overdoses from opioids. According to the CDC, overdose deaths involving opioids have quadrupled since 1999. In 2014, over 14,000 people died from overdosing on prescription opioids like fentanyl 14.

Ambulance services noted that since the mid-90’s, overdoses from prescription painkillers and heroin have been increasing. In the 1980s, ambulance operators in the U.S. may have seen only a few cases each year but are now seeing dozens to hundreds per year 9.

Both prescription and recreational use of oxycodone, hydrocodone, and fentanyl are increasingly common, and the use of heroin is on the rise (partly due to the transition to heroin by many prescription drug abusers)—all contributing to the “opioid epidemic.” According to the 2015 Substance Abuse and Mental Health Services Administration (SAMHSA) nationwide survey, 3.8 million Americans aged 12 or older reported currently misusing prescription painkillers. The survey also found that about 329,000 people were regular users of heroin in 2015 15.

Users of opioids are often on the lookout for an even more potent high, which makes drugs like fentanyl an attractive option, despite its dangers. There have even been reports of people chewing or eating fentanyl patches to receive a stronger high 9.

When people use drugs like fentanyl when they are not experiencing pain, they can experience an intense rush of euphoria. When someone continually seeks this euphoric state, it can result in addiction.

Those who struggle with opioid dependence often fear the onset of acute opioid withdrawal, which will inevitably occur when attempting to quit. Withdrawing from fentanyl is seldom life-threatening; however, it can be extremely uncomfortable. The withdrawal symptoms can vary from person to person, but may be quite severe.

Treatment centers offer inpatient and outpatient resources to help individuals who are addicted to fentanyl wean themselves off of the drug safely. Medical supervision during detoxification can help manage withdrawal symptoms and lessen the odds of relapse after leaving treatment.

Outpatient treatment is an appropriate option if your addiction is less severe and you think that it is possible for you to live at home while you get treatment. Outpatient programs require that you go to the clinic periodically throughout the week for treatment and therapy. Group therapy is at the crux of outpatient treatment and it can help you create a support network that is drug-free.

Call us today at for help in finding a treatment center that is best for you.