Oxycodone is a prescription opioid pain reliever often sold under the brand names OxyContin, Percodan, and Percocet 1. Oxycodone—often called “oxy”—causes users to experience a pleasurable euphoria. In seeking Oxycodone’s pleasurable effects, users may misuse the drug by taking it without a prescription, taking it in larger amounts than prescribed, or tampering with it by snorting, smoking, or injecting it.

Oxycodone is one of the most frequently misused prescription drugs in the United States 2. In its various pharmaceutical formulations, it is available as an instant-release pill, where the drug is immediately released into the bloodstream, and as an extended-release version, where it is released slowly over a longer period of time. Some users may tamper with the extended-release pill by crushing it up and snorting it in order to release the effects all at once and experience an intense high 2. While any recreational use of oxycodone is dangerous due to the myriad of possible side effects, snorting may be even more dangerous as it can lead to additional serious medical complications as well as an increased risk of overdose 3.

While snorting oxycodone is not unique to any one demographic, certain groups may be at higher risk, including adolescents, women, and older adults 3. Surveys indicate that adolescents—especially young men—may be at higher risk of snorting oxycodone than other age groups 3,4. Adolescent abuse of oxycodone is a significant concern because it can lead to future opioid addiction 3. While men tend to misuse prescription drugs at higher rates than women, the rates of overdose among women is increasing at a significant rate 3. Older adults are also more likely to experience chronic health issues that require taking multiple drugs at once. This can lead to unintentional misuse and dangerous drug interactions 3. Understanding the dangers of snorting oxycodone, who is at risk, and the treatment options available can help people struggling with oxycodone addiction get the necessary help.

Yes, snorting oxycodone is dangerous and can have serious and even deadly consequences. Snorting oxys not only quickens and intensifies the euphoric high from the drug 5, but it also increases the likelihood a user will experience significant medical or psychological problems, such as an overdose and nasal damage 3,6.

Along with the risk of medical complications, the likelihood of developing an addiction to oxycodone is significantly increased when a user administers the drug in ways other than prescribed 7.

Extended-release was developed to minimize the drug’s addictive potential by slowly and steadily releasing the drug into the bloodstream, therefore reducing its euphoric effects. However, crushing up and snorting extended-release oxycodone can intensify its effects because the drug is released all at once, resulting in a maximum dose in a short period of time in the brain 5,7. This can increase the risk of breathing difficulties, coma, and addiction 7.

From Oxy to Heroin

Some oxy users may transition from prescription drugs to heroin 7. This can occur in users who develop a tolerance to oxycodone and eventually turn to heroin for a stronger high.

The transition may also be the result of affordability in many cases. Heroin is significantly cheaper than painkillers on the street. Painkiller addiction has been labeled a contributing factor to the increasing numbers of heroin users, new populations of heroin users, and overdoses from heroin. In fact, as opioid prescriptions rose, numbers of people trying and getting hooked on heroin did as well—the amount of heroin abusers doubled between 2005 and 2012 7.

While both oxycodone and heroin pose a significant risk of overdose, heroin is even more dangerous because it is almost impossible to know the purity of heroin sold on the street, as well as whether it has been contaminated with (or even replaced by) other drugs, such asfentanyl (an opioid much more potent than heroin) 7.

Users may abuse the drug because of its pleasurable effects. However, oxy can also cause unpleasantside effects such as 8:

Oxycodone is not meant to be snorted. In fact, the pills that contain oxycodone frequently include other ingredients such as talc, lactose, and stearyl alcohol, which may cause serious damage when insufflated 6.Snorting drugs like oxy may result in problems like 6:

Can Snorting Oxycodone Cause an Overdose? 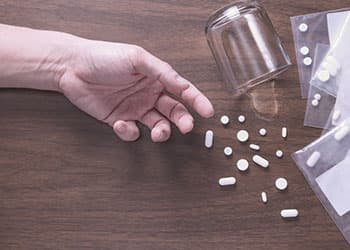 Taking oxycodone as prescribed by a doctor is unlikely to lead to serious problems or overdose. However, overdose is an immediate risk for anyone snorting the drug and/or taking excessive amounts. Taking more than the intended dose of oxycodone even once can result in severe respiratory depression, where breathing slows down or stops completely 3.

You are more likely to overdose on oxycodone if you 3:

Symptoms of an oxy overdose include 9:

With proper treatment, people may recover from an overdose. However, if left untreated, an overdose can result in permanent brain damage or death 9.

Numbers of opioid overdoses have risen to epidemic proportions, nearly quadrupling since 1999 4.

Signs That Someone is Addicted to Oxycodone

Snorting oxycodone increases the risk of addiction, since crushing and snorting elicits more heightened effects and an intensely rewarding sensation that reinforces continued use 7. Signs that a person is addicted to oxycodone may include 10:

Other signs you may have noticed in a loved one who is snorting oxycodone include:

Admitting that you or a loved one is suffering from oxycodone addiction can be difficult. Fortunately, treatment programs and recovery groups are available to help.

According to the National Institute on Drug Abuse, successful addiction treatment involves detox, medication, and therapy 3. There are several different options for getting help for oxycodone addiction:

Medication-assisted treatment is also helpful for treating oxy addiction. Medications can be used to reduce withdrawal symptoms, decrease cravings, and counter the effects of opioids if a relapse occurs 3. Medications are most effective when combined with behavioral therapy and sober support 3. Medications used to treat oxy addiction include 3,11:

Committing to treatment is an important first step in recovering from oxycodone addiction. Call today for help finding an addiction treatment program.