Since the mid-1990s, rates of prescription drug abuse have skyrocketed. Today, the widespread abuse of prescription medication—whether it involves opioid painkillers, sedatives or stimulants—is being recognized as a serious national health problem in the United States.

According to the 2014 National Survey on Drug Use and Health, approximately 6.5 million Americans reported taking prescription medication for non-medical uses—a number that represents 2.5% of the national population. More than 4 million of these individuals abusing prescription drugs reported abuse of pain relievers.

Percocet is the trade name for a prescription pain reliever that combines:

What Does Percocet Do?

Percocet is prescribed for short-term relief of moderate to severe pain that is not typically chronic in nature (i.e., post-surgical pain, pain from a sustained injury, etc.). Like heroin and morphine, Percocet affects the brain and the central nervous system, changing the way the brain perceives pain.

Percocet acts at opioid receptors throughout the body to initiate a cascade of chemical events that, ultimately:

When taken in large doses, Percocet can cause a “high” similar to heroin that is characterized by:

Percocet and other prescription drugs are often mistakenly viewed as a safer way of getting high than using illicit street drugs, like heroin and cocaine. People may think that since a doctor is prescribing the medication that it must be safe and effective for their needs. Unfortunately, however, Percocet abuse can lead to the same dangerous problems of dependence and addiction as the illicit street drugs that share their origin.

To become better acquainted with the substance, it is helpful to understand and know the slang terms for the drug. For example, Percocet is known by numerous names including:

Signs and Symptoms of Percocet Abuse

One way to spot Percocet abuse is in detecting some of the side effects manifesting in those using the drug. Some of the most common side effects of Percocet use include:


Other Signs of Percocet Abuse

When assessing someone for Percocet abuse, it’s important not to solely look for Percocet’s side effects. There are a number of other behavioral signals that may be red flags for abuse and addiction to this prescription opiate.

A major sign of opiate abuse is taking more of the prescription than directed by a physician. If someone you love has a prescription but is taking the pills more frequently than seems normal or is taking the drug in excessive doses, he or she may have a problem.

Taking Percocet in an alternate method is another warning sign. For example, if the Percocet is prescribed as a tablet, but the user has begun crushing, chewing, snorting, or injecting the medication, this is a red flag.

Percocet is only available by prescription, so if you notice a loved one “doctor shopping” – or, going to different doctors to obtain multiple pain prescriptions instead of using one doctor who can monitor the overall use of the drug – it could be a sign of trouble. Someone struggling with Percocet addiction will forge prescriptions and buy/ trade Percocet to get the drug, as well.

Opiate drugs like Percocet become less effective when used over a period of time. The body develops a tolerance for the drug and needs more of it to achieve the same level of pain relief and/or “high.” This propensity for tolerance makes this category of drug a prime candidate for abuse, even by people who start off taking the drug as prescribed.

The following video from Consumer Reports provides an overview of the addictive potential of prescription opiates like Percocet and how to stay safe when prescribed one of these drugs.

Percocet abuse can lead to dependence and addiction. As one struggles with opioid addiction, compulsive misuse of the drugs can cause:

People with a Percocet problem sometimes find it difficult to obtain a regular supply of the drug, resulting in a cycle of abuse and withdrawal. Withdrawal symptoms can include:

People who abuse Percocet are also at risk of overdosing on the drug, which can be fatal. Symptoms of an overdose can include: 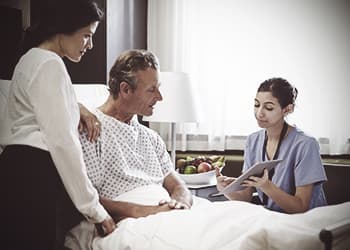 Supervised detox can be an effective way to initiate treat Percocet abuse and addiction. Coming off of Percocet under medical supervision may ensure that the withdrawal symptoms don’t cause a relapse. The medical staff in a Percocet detox center can take you or a loved one off of the drug slowly, to minimize withdrawal symptoms that can be extremely uncomfortable.

Detoxification is only the first step in treatment for a Percocet addiction. Undergoing detox without following it up with rehabilitation therapy is more likely to lead to relapse.

If medically assisted treatment is recommended, individuals may be administered medications to help manage opiate dependence like methadone or buprenorphine. These substances work to relieve cravings and withdrawal symptoms from the Percocet.

Other treatment methods aimed at treating the psychological aspect of substance abuse include outpatient mental health therapy and outpatient drug and alcohol treatment. Each treatment method will assist the addict in building awareness and understanding regarding the nature of her addiction. Sessions may focus on identifying people, places, and things that trigger use or feelings associated with use.

Community options include local 12-step recovery programs that harness the power of the group and peer support. The most important part of designing a treatment plan for Percocet abuse and addiction is to tailor the plan to meet the needs of the individual involved—an addiction treatment professional will be able to prescribe the proper course of treatment.

We can help you assess your options and choose a treatment center in your area. Treatment support staff are available seven days at to discuss with you how you can find help for yourself or someone you love.

Statistics on Percocet Use

According to the 2015 National Survey on Drug Use and Health (NSDUH), almost 12.5 million Americans age 12 or older reported taking prescription painkiller medication for non-medical uses—a number that represents 4.7% of the national population. More than four million of these individuals abusing prescription painkillers reported abuse of oxycodone-containing pain relievers like Percocet.

Percocet facts and statistics are often aggregated with other oxycodone-based pain relievers. Percocet and other prescription pain medications comprise a growing percentage of the total number of substance abuse treatment admissions in the United States. According to the NSDUH:

In 2011, the Drug Abuse Warning Network reported that 29% of the emergency department visits associated with prescription drug misuse were involved narcotic painkillers.

The Monitoring the Future study, conducted by the University of Michigan, documents the alarming rates of pain medication abuse in teens. In 2015, 8.4% of seniors in high school reported having tried narcotic medications without a prescription at some point in their life. Fortunately, this use rate marks a significant decrease from 2014 and a general trend of decreasing rates of use among 12th graders since 2012.

The NSDUH found that almost 1 million adolescents between the ages of 12 and 17 abused painkillers like Percocet in 2015, with almost 300,000 of them using in the month before taking the survey.