Police Are Gearing Up to Face Down a Couple of Killers

With drugs like fentanyl and carfentanil on the streets, officers are in danger.

Guns won’t help. A bullet-proof vest won’t cut it. No badge, baton, hat, or handcuffs will stop the threat.

The latest danger faced by law enforcement officials is a class of drugs that can kill on contact. Standard-issue equipment is no longer enough. To protect and serve, modern police officers must receive new gear.

What’s this new threat, you ask? It’s a couple of lethally potent opioids – fentanyl and carfentanil. 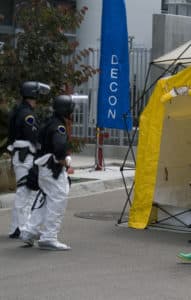 As if that wasn’t strong enough, carfentanil has also made its way into the illegal drug market. This deadly substance is 100 times more powerful than fentanyl. With such a high level of toxicity, it’s no surprise that just two milligrams of carfentanil can kill 100 people.

Think about that for a minute: two milligrams can kill 100 people.

Adding fuel to the already raging opioid epidemic, both of these dangerously powerful drugs have taken lives in many areas of the country. From 2014 to 2015, deaths involving synthetic opiates such as fentanyl increased by almost 75 percent.

And here’s the kicker; fentanyl and carfentanil pose a threat to more than just the people using them. Since they come in powder form, officers are getting sick or overdosing after accidental exposure. With such high toxicity, contact with a few grains of powder can cause these tragedies.

Within minutes, these powerful opioids can cause disorientation, sedation, and even stop the heart.

Both drugs are increasingly showing up in Harris County, Texas. In response to this new type of safety risk, officials decided to equip their officers with new tools. In February, Houston police in the narcotics division received 196 intranasal doses of Narcan, a nasal spray used as an antidote to treat opioid overdoses. Equipped with this drug, officers now have a means to help themselves – or others – suffering from a life-threatening overdose.

With the increasing appearance of fentanyl and carfentanil, the Harris County Sheriff’s office purchased an additional 264 doses of Narcan for their deputies. For further protection, deputies also received heavy-duty protective gloves and respirator masks.

To avoid unnecessary exposure, the Houston Police Department and other local law enforcement agencies also decided to stop performing roadside tests of substances they suspect to be illicit drugs. While the Houston Forensic Science Center tested only one fentanyl case in 2015, this number grew to 13 cases in 2016. They’ve already seen eight fentanyl cases and one carfentanil case in 2017. The drugs have been implicated in at least 26 deaths since the beginning of 2016.

Law enforcement officials expect these latest protective measures will help to guard their deputies from danger. For their sake (and the public’s), let’s hope it’s enough.