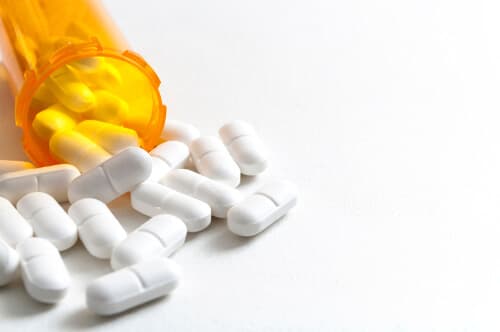 The category of prescription painkillers covers a wide variety of opioid drugs, including morphine, codeine, oxycodone (OxyContin, Percocet), and hydrocodone (Vicodin, Norco)—as controlled substances, each of these drugs have inherent abuse potential. Painkiller abuse can range from codeine cough syrup misuse to the diversion and abuse of potent prescription drugs used in the management of extreme pain, such as fentanyl. When used as intended, these drugs provide welcome relief from the pain associated with cancers, surgeries, bone breaks, and other injuries, but opioid painkiller abuse is a growing problem.

Opioids are chemically related and interact with opioid receptors on nerve cells in the brain and nervous system to produce pleasurable effects and relieve pain.1

Painkiller addiction doesn’t have to rule your life.
Treatment provides hope for recovery.

If a loved one has been prescribed opioid painkillers or otherwise has access to them, the following signs could point to the misuse of those drugs:2 The impact of painkiller abuse often extends far beyond the common physical effects of these drugs. Someone addicted to painkillers may experience:4

Results from the Substance Abuse and Mental Health Services Administration’s 2017 National Survey on Drug Use and Health indicate an estimated 11.4 million people misusing opioids in 2017. This represents 4.2% of the population aged 12 or older.6

According to the American Society of Addiction Medicine’s 2016 Facts & Figures:1

Teens are among the most vulnerable for opioid misuse. Teens often won’t know the facts about painkiller abuse. Many teens will experiment with drugs at some point during their lives, and prescription opioids are often used because they’re seen as being safer alternatives to illicit drugs.

Teens are among the most vulnerable for opioid misuse.

In 2015, an estimated 276,000 adolescents aged 12 to 17 were currently engaging in nonmedical painkiller use. This figure represents 1.1% of adolescents.1

According to the National Institute on Drug Abuse’s 2018 Monitoring the Future Study:7

While opioid painkiller abuse can wreak havoc on a user’s life, recovery is possible with the proper addiction treatment.

Opioid addiction treatment typically starts with medical detox and stabilization, which involves a supervised, medication-managed withdrawal from the drug.5 In addition, there needs to be an assessment to see why the opioid was taken in the first place—be it for prescription use or nonmedical misuse. If the user suffers from a painful physical condition, alternative methods of pain management may be needed to best support recovery.

A treatment plan is developed to help people achieve abstinence and sustain recovery. Counseling and therapy serve as the basis of professional treatment. Talk therapy is very effective, and it can help people work out what they need to do to get off painkillers and to cope with life without drugs. Additional therapeutic interventions will help people to make healthy changes to their thoughts and behaviors regarding their drug us.

A treatment plan is developed to help people achieve abstinence and sustain recovery.

Aftercare planning and relapse prevention skills will prove helpful to long-term recovery when a formal rehabilitation period comes to an end. Many people in recovery continue on with support group participation to help reinforce the lessons learned during the counseling process and build on successes achieved while in treatment. They’ll also get support from other members of the group on similar recovery journeys. The wisdom and support of peers and other ongoing systems of support can bolster the recovery process dramatically, and they help to give recovering addicts the best chance of remaining clean and sober in the long term.