Risks of Smoking While Breastfeeding

The numerous health hazards associated with smoking tobacco are well researched and documented. There is no safe time to smoke, but in some situations, the potential for harm is more unequivocal than usual. One such situation is smoking before and during pregnancy. Before pregnancy, doing so makes conception more difficult. Continuing to smoke while pregnant can lead to a lengthy list of risks and concerns for the mother and child, including a greater chance of miscarriage and an increased likelihood of low birth weight 1:

Due to this risk, about 55% of women smokers choose to quit use during pregnancy 1. Of the 55% that quit, about 40% of new mothers will have resumed smoking before their child is 6 months old 1. With 80% of mothers initiating breastfeeding when their baby is born, and over 50% still doing so at 6 months 2, the question of whether smoking is safe during breastfeeding becomes increasingly important.

Breastfeeding offers numerous benefits to both mother and baby, including lowered risk of certain diseases and sudden infant death syndrome (SIDS) 3; however, if you plan to smoke while doing it, there are some risks to consider.

Does Nicotine Transfer to Breast Milk?

Yes. The active drug in tobacco smoke is nicotine, and it has been shown to get passed from a smoking mother to her baby through breast milk 4.

This transmission is observable through detectable amounts of nicotine, or its metabolites such as cotinine, in breast milk, blood, and urine. In fact, the relationship is proportional. The more a mother smokes, the more cotinine will be found. Additionally, less time between smoking and feeding leads to higher levels in the breast milk 4.

When nicotine is consumed, it enters the bloodstream and triggers the release of epinephrine (adrenaline) from the adrenal glands. Epinephrine is a central nervous system (CNS) stimulant that can 4:

In addition to the epinephrine, nicotine also induces the release of dopamine, a neurotransmitter related to feelings of pleasure. Continued nicotine use can modify the brain’s pathways 5. These physiological changes are experienced by mother and child alike.

Mothers that are concerned about the high nicotine levels in the milk may consider quitting with the assistance of some form of nicotine replacement therapy (NRT). By using products like nicotine gum, sprays, or patches, they may hope to reduce the risks associated with secondhand smoke or eliminate the transfer of nicotine entirely.

However, understand that the nicotine from NRTs will also be transmitted from mother to child. The amount will vary based on the type and dose of NRT. For example, use of a 21 mg nicotine patch will transfer an amount of nicotine into the breast milk that is equivalent to smoking 17 cigarettes per day. The 14 mg and 7 mg patches will transfer a smaller amount of nicotine proportional to their dose. This means that use of a 7 mg patch would be equal to smoking 5 or 6 cigarettes daily 6.

There is a minimal amount of research into the use of sprays or gum as methods of NRT during breastfeeding, but it is reasonable to think that the nicotine will still be passed onto the child. The level of nicotine in the blood after using NRT sprays is about a third of those that smoke, so levels in breast milk would likely be less as well. It is more challenging to predict nicotine levels from gum because concentrations range widely depending on the number of pieces chewed daily and how much nicotine is derived from each piece 6.

Will It Harm the Baby? 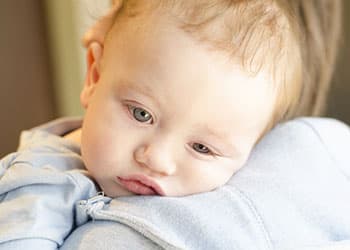 Evidence suggests that smoking while breastfeeding can potentially harm your baby with symptoms like:

There are also risks a child faces simply from being in an environment with smoke. Babies that exposed to cigarette smoke 7:

To reduce these risks, work to keep your baby in a smoke-free environment when possible and discourage others from smoking in your car or home 7.

Can I Safely Breastfeed While Smoking?

While there are differing opinions in the medical community on the issue of smoking while breastfeeding, many suggest that the many gains made by the feeding outweigh the potential risks.

Breastfeeding is associated with numerous benefits for you and your child.

Health benefits for your baby 3:

Health benefits for you 3:

There is no way to reduce all the risks of smoking while breastfeeding, but because of the many benefits triggered by this type of feeding, it remains the recommendation of the CDC and the U.S. Department of Health and Human Services that all mothers should attempt to quit. However, if the mother’s attempts at quitting have been unsuccessful, they should continue to breastfeed 7,8. These organizations agree that the reward is worth the risk.