CA lawmakers recently debated whether or not pot could be delivered by drone.

What happens when a new law is put into place? Dozens of other rulings follow suit to regulate the ramifications of the first law. As each new scenario pops up, lawmakers create another regulation to deal with it.

The legislation process sure does keep policymakers busy. It also ties up a ton of taxpayer money in more unnecessary paper pushing and rule creation.

The Evolution of Marijuana Laws 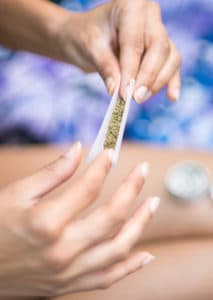 The legalization of marijuana is a perfect sample of this law-making domino effect. One of the most recent examples comes out of California.

In the Golden State, lawmakers have come to the decision that drones and unmanned vehicles cannot deliver marijuana. This ruling was established by California’s Commercial Cannabis Business Licensing Program Regulations. These policies govern the laws for how marijuana dispensaries can deliver MJ.

Decades ago, no one would have fathomed this ruling would need to be made. Businesses didn’t sell marijuana. They didn’t deliver it to customers, and they certainly weren’t considering getting their products to consumers via drones.

Today, with new marijuana laws in place and new technology coming on the market every week, legislators stay busy establishing new laws in an attempt to keep up with an ever evolving world.

Staying a Step Ahead

California legislators are hoping to stay a step ahead of issues by laying down these rules. The delivery decision will be disappointing to several California medical marijuana retailers. Hoping to capitalize on new opportunities, they made premature promises to their consumers of deliveries by drone. With this new policy, they’ll have to find other creative methods of marijuana distribution.

The official policy states “Transportation may not be done by aircraft, watercraft, rail, drones, human-powered vehicles, or unmanned vehicles. Deliveries may be made only in person by enclosed motor vehicle. Cannabis goods may not be visible to the public during deliveries. Cannabis goods may not be left in an unattended motor vehicle unless the vehicle has an active alarm system. Vehicles used for delivery must have a dedicated, active GPS device that enables the dispensary to identify the geographic location of the vehicle during delivery.”

With these laws in place, it looks like marijuana dispensaries in California won’t be creating an Uber-style marijuana delivery system any time soon. Amazon won’t be dropping packages of weed at residents’ doorsteps via delivery drones.

In our dynamic society, it’s hard to predict what we’ll see next. Who knows what laws and regulations will come into play. What do you think? What’s next on the agenda? And, are these policies a good use of time and resources? We invite your comments below.