Although law enforcement fights every day to keep our streets free of drugs, the problem of drug supply and demand remains. This page will provide information and statistics to illustrate the magnitude of the movement of drugs into and throughout the United States.

Drug abuse is a major problem in the United States, and individuals seeking to abuse drugs generally have little trouble finding those substances. Abuse of prescription and nonprescription opioids continues to be the public health crisis of our time. One of the effects of widespread prescription opioid abuse has been an uptick in new heroin users. The increase reflects, at least in part, a growing number of individuals who transition from prescription opioids while on the hunt for a cheaper, more readily available alternative in heroin.

Synthetic opioids, such as fentanyl, are playing a major role in the quickly increasing numbers of overdose deaths. Much of the illicitly manufactured fentanyl comes from Mexico and China. In addition, dangerous analogs of fentanyl, such as acetyl fentanyl, are often manufactured in China and trafficked into the U.S.1 Fentanyl is up to 40 times more potent than heroin and roughly 100 times more potent than morphine.1 Acetyl fentanyl is closely related to fentanyl and has been linked to a number of overdose deaths in the U.S. Fentanyl and acetyl fentanyl are often used by opioid-dependent individuals as a substitute for heroin, or they are added to heroin products to add bulk or enhance effects.

A major threat to public health safety comes from the neighboring country of Mexico. Illicit opium poppy cultivation has been increasing. The Government of Mexico reported wiping out 21,425 hectares of opium poppy fields in 2014, compared to 14,419 hectares in 2013.2 Between 2010 to 2015, the number of heroin seizures on the border of the United States and Mexico more than doubled.1 The problem doesn’t stop with heroin—according to the DEA, Mexican drug trafficking organizations are additionally the largest international suppliers of all cocaine, marijuana, and methamphetamine that crosses the U.S. border.2 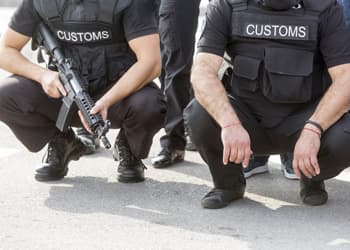 In 2016, 6 drug types accounted for nearly all drug trafficking offenses:3

The top 5 districts for drug trafficking in 2016 were:3

The Current State of Drug Traffic in the United States

Although the DEA and other government agencies are working to stem the tide of drugs crossing U.S. borders, drug trafficking operations continue to evolve. For example, organizations are using encrypted technology and social media platforms to communicate during drug shipments and recruit new members to their organizations. These new smuggling techniques are making it harder for drug enforcement agencies to monitor criminal activities and crack down on widespread operations such as the Mexican drug cartels.5

According to the DEA, when shipments of drugs are trafficked into the U.S. in kilogram or pound-sized blocks, they are usually taken to an apartment or house where a person responsible for bagging up the drugs breaks them into smaller quantities using blenders, coffee grinders, food processors, or diluents. When drugs are repackaged and sold, adulterants such as sugars, caffeine, quinine, paracetamol, procaine, and, more recently, fentanyl and acetyl fentanyl are added to the drugs to bulk, enhance, or mimic a pharmacological effect. Fentanyl is often mixed with heroin, and it may also be pressed into counterfeit prescription painkillers. These adulterants are almost always added to drugs without the user’s knowledge, which can result in overdose and other serious health consequences.5,6 These adulterated drugs aren’t always found on the street. Some users may search for cheap prescriptions online and unintentionally buy counterfeit pills with ingredients much stronger and more dangerous than what they thought they were getting.

Stronger, synthetic drugs are now entering the market, often disguised as heroin or other drugs. Cases involving carfentanil—a synthetic opioid with a potency 10,000 times that of morphine—is a huge threat to public safety. Another dangerous drug on the market is the synthetic, designer drug U-47700, nicknamed “pink.” The effects of pink mimic other opioids such as heroin and, in 2016 it had caused 46 reported deaths and required an emergency temporary scheduling by the DEA.7

The Rising Tide of Overdose Deaths

The number of overdose deaths in the U.S. has increased dramatically over the past decade. In fact, overdose is now the leading cause of injury death in the U.S.5 According to an article published in JAMA, drug overdose deaths more than doubled from 2000 to 2015, and deaths involving opioids more than tripled during the same time frame.8 In 2000, the death rate from drug poisoning was 6.2 per 1000,000 people; in 2015, the rate jumped to 16.3 per 100,000 people.8

With an influx of trafficked drugs, users cannot be sure if what they are buying is truly a prescription opioid or if it’s laced with other harmful adulterants like fentanyl, carfentanil, or “pink.” In 2014, 129 people died every day from a drug overdose, and 2017 saw a majority of overdose deaths involving synthetic opioids.5,9 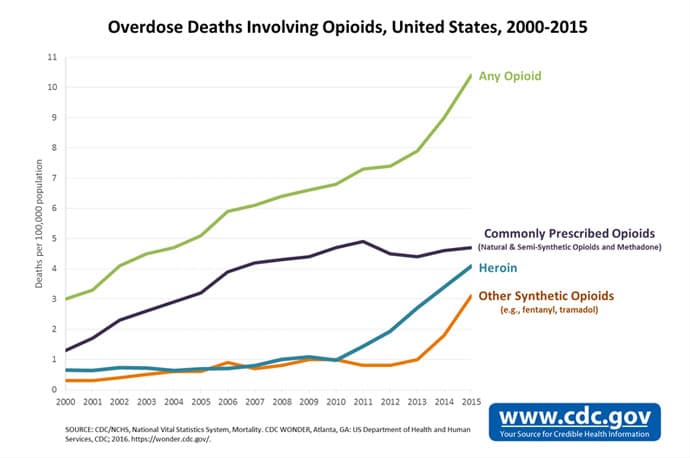 How to Avoid Being Just Another Statistic

Answering yes to just a few of these questions could indicate that addiction treatment might be beneficial. To start, you can: