Trazodone Use in Substance Abuse Treatment

Each individual in recovery is likely to have had a somewhat unique substance abuse program experience. There are a number of therapeutic variables, including treatment center setting and program duration. However, many commonly encountered treatment components include:

Trazodone is a medication that is sometimes used to treat depression or insomnia.1 Trazodone is indicated for the treatment of major depression.1 Also, among people in recovery from addiction to alcohol, trazodone is the most commonly prescribed medication used to promote sleep.2 However, trazodone may not be appropriate in all cases. Many users taking it to help them sleep may not realize that it is, in fact, an antidepressant and not a sedative-hypnotic medication formulated specifically to aid sleep (like Ambien, for example).

Getting professional help can mean the difference between achieving sustained sobriety and constantly struggling with addiction.


How Safe Is Trazodone?

Trazodone works by affecting chemical messengers in the brain, including serotonin and dopamine; however, its precise mechanism of action isn’t fully understood.8

Trazodone’s primary use is for the treatment of depression.7 As previously mentioned, trazodone is also commonly given to patients for insomnia management because one of its side effects is drowsiness; however, this is an off-label (not FDA-approved) use of this substance, and there are limited studies of its efficacy and safety for insomnia in clinical trials.9

Among people in recovery from alcohol use disorder, trazadone is the most commonly prescribed medication used to manage sleep disorders.2 However, the risks may outweigh the benefits. One study found that once detox is complete, continued trazodone use for sleep management may contribute to increased drinking.10 The study further noted that until more studies have established the benefits and safety of the drug for sleep disturbance, they cannot recommend with confidence its use for this purpose after the initial detox period ends.10

Trazodone is not believed to be addictive—there is little evidence users experience any kind of “trazodone high.” However, it can cause negative side effects in the user. It is best to check with your doctor before taking trazodone and discuss the possible risks, especially in the case of off-label use.7,8

How Helpful Is Trazodone in Addiction Treatment?

While it has shown some positive results, the use of trazodone in treatment for substance abuse may not always be helpful. For example, among people seeking help for alcohol and methamphetamine, trazodone has produced mixed results:

Whether trazodone is an appropriate part of addiction treatment will depend on the individual, the course of treatment, and recommendations from the individual’s doctor.

What Are Trazodone’s Possible Side Effects?

It is important to note that taking trazodone could cause negative side effects to your mind and body. These include:4,7 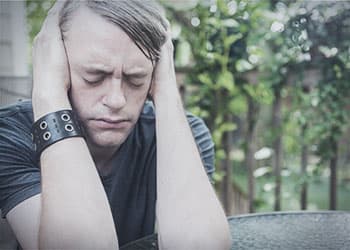 Trazodone must be taken with caution to avoid serious side effects or overdose. Trazodone overdose symptoms include:7,11

One of the biggest risks associated with taking trazodone is suicide.1 Antidepressants increase the risk of suicidal thinking and behavior for children and young adults. If you are taking trazodone, it is important that you are under the supervision of a doctor so they can monitor your condition for suicidality or other serious changes in mood/behavior. In addition, if you are pregnant or nursing, trazodone may have adverse effects on your baby.1

Abrupt discontinuation of the medication may result in trazodone withdrawal symptoms like anxiety and difficulty sleeping.

Any time you take a medication, there are risks. While trazodone has shown to help some users in recovery, side effects can occur and, in some cases, may be severe. If you are considering incorporating this medication into your addiction treatment, be sure to consider the benefits and risks and do so with the guidance of a qualified medical professional.