Could medical marijuana replace opioid painkillers in the future?

A recent study published in the Journal of Alternative and Complementary Medicine, revealed medical marijuana users take fewer other medicines – such as opiates.

Researchers monitored the use of prescription medication by participants enrolled in the Illinois medical marijuana program. This is the first peer-reviewed scientific study conducted which examines this correlation. Their results confirmed medical marijuana might contribute to the reduced use of opioids.

As the opioid epidemic continues to claim countless lives across the nation, these Illinois researchers think medical marijuana could be an effective alternative to prescription painkillers. 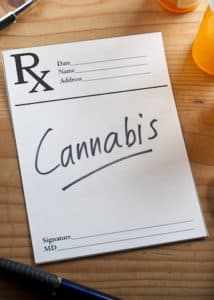 The study was conducted at Depaul and Rush universities and consisted of thirty participants at an average age of 45 years old. At the conclusion of the study, participants said marijuana worked faster to relieve their pain than other prescription medication and had fewer side effects.

Most commonly, marijuana was used as an alternative to opioids but participants also reported cutting down on other medications, such as:

Encouraged by their findings, lead researcher, Assistant Professor Douglas Bruce, believes cannabis could eventually be used to treat many other conditions, such as:

Shea Evans, 26, a medical marijuana patient (who wasn’t in the study) told the Chicago Tribune that cannabis helped her overcome a substance abuse issue. She’d become dependent on several of the 18 different prescriptions medications used to treat her medical conditions. She stated, “Medical cannabis is the reason I’m opiate free now…it really gave me my life back and makes my pain manageable, without inebriating me or forming another dependence.”

Researchers want to continue their investigation to determine an ideal individualized dose that could be used to help someone taper off prescription painkillers, like OxyContin.

Previous research conducted at The University of Georgia found areas with marijuana dispensaries had a reduced number of opioid overdoses. Another paper, published in a Journal of the American Medical Association, discovered states with forms of legal marijuana reported a 25 percent lower annual average opioid death rate.

The Chicago Tribune reported all of the participants in this study reported a deep dissatisfaction with prescription medications. Bruce said, “One of the most compelling things to come out of this is that people are taking control of their own health, and most providers would agree that’s a good thing.” However, he warned of limitations: “The lack of provider knowledge around what cannabis does and doesn’t do, the difference in products and ingestion methods and dosing, is all kind of a Wild West.”

Additional Reading: Voices From Both Sides of the Medical Marijuana Debate