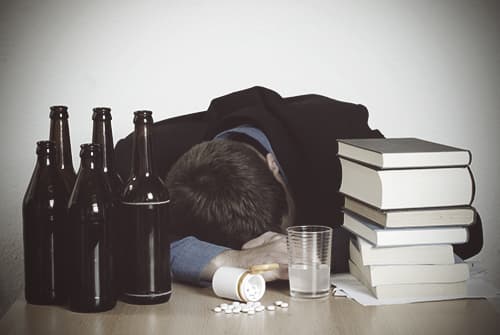 Anyone at risk for alcohol or Adderall abuse should know several facts about both drugs. Both drugs are fairly common, and both can be lethal if used in conjunction or in large amounts separately.

Alcohol is a central nervous system depressant, meaning that the drug delays reaction times for users and limits inhibitions. It also lowers critical thinking and motor skill thresholds. The effects of both drugs only last a few hours, but prolonged use could cause long-term organ damage, such as serious liver problems and memory issues. When alcohol and Adderall are used in conjunction, the mix of drugs can be extremely dangerous and even cause death.

Signs and Symptoms of Alcohol with Adderall

There are several signs of concurrent alcohol and Adderall of which everyone should be aware. If someone is abusing alcohol, they are likely to have impaired brain function, including [5]:

If too much alcohol is consumed in one sitting, passing out may occur. Large doses of alcohol can cause alcohol poisoning, which may cause death when left untreated.

Adderall is prescribed clinically to treat Attention Deficit Hyperactivity Disorder, or ADHD. However, Adderall has quickly become a popular recreational drug for students.

Alcohol is another popular drug for students, making it imperative that young adults have all of the information on the effects of combining the drugs.

Concurrent alcohol and Adderall problems can be severe, and in some cases they can be fatal. Because Adderall stimulates the central nervous system, it provides a feeling of energy to the user. The drug also stimulates the heart, prompting the organ to beat harder and faster for the duration of the drug’s time in the body, that may result in heart failure or seizures.

Alcohol acts as a central nervous system depressant, meaning that the drug is slowing down the heartbeat. When the drugs are used in conjunction, the signals going to the heart can get mixed, causing the organ to start beating out of rhythm. When the heart beats out of rhythm, an arrhythmia can occur, which can be extremely dangerous.

If the heart can’t get back into rhythm, an arrhythmia can cause death [9]. Other serious side effects of using both drugs in conjunction include:

Find out about how to help a adderall addict by calling our helpline at .

Inpatient rehab programs require patients to stay overnight, typically for a duration of somewhere between 30 and 90 days.

Outpatient programs do not require patients to stay overnight, though patients must check in with a medical professional at least once per day. Both program types offer many of the same services and support systems.

Statistics for Alcohol and Adderall

The usage of prescription drugs is rising in the United States, with college students more likely to abuse stimulants such as Adderall than other groups. This is a troubling trend because of the high rate of binge drinking and alcohol intoxication among college students.

Although prescription drug and alcohol abuse has declined in recent years among teenagers, there has also been a decline in perceived harm of regular prescription drug use. This shift in attitude may indicate a rise in prescription drug abuse in future years. Research also shows that most teens continue to obtain these drugs from friends or relatives.

Despite alcohol being illegal for persons under the age of 21 in the United States, people aged 12 to 20 years old are reported to consume 11% of all alcohol in the country (Centers for Disease Control and Prevention, 2015).

For those interested in alcohol and Adderall articles, resources, and info, there are several references to read:

If you are interested in getting your life back in order and quitting alcohol and Adderall use, then give us a call at . We’d be happy to work with you to get you in a rehab program that fits your individual needs. Sobriety is just a call away! Contact us today and let us help you.

She received a Master of Science in Public Health from the University of South Florida, after which she worked as an epidemiologist at the local health department in Miami-Dade.