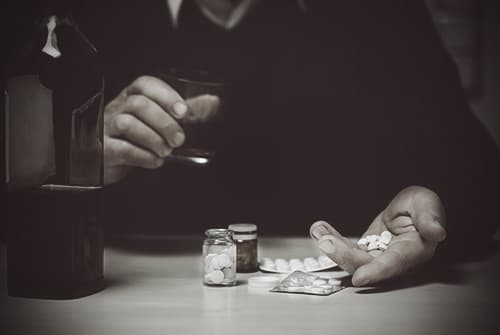 The Problem of Alcohol and Soma Abuse

Abusing Soma (a muscle relaxant) and alcohol (a depressant) together can compound the negative health effects of both. Treatment is vital for someone abusing these drugs.

Soma (generic name: carisoprodol) is a centrally-acting prescription muscle relaxant used to relieve skeletal muscle spasms (especially in the lower back) and associated pain in acute musculoskeletal conditions. Its therapeutic effects can last from 4 to 6 hours.

Carisoprodol is metabolized in the body into a second compound known as meprobamate. Meprobamate itself is an addictive anti-anxiety medication that enhances activity at a particular type of communication receptor in the brain (the GABA receptor) related to reducing brain activity. Essentially, Soma dampens pain signals between the nerves and the brain, which can have the therapeutic effect of reducing skeletal muscle pain.

Alcohol affects a similar subset of receptors types, but in different areas of the brain. When used at the same time, Soma and Alcohol work together to:

When used as prescribed, Soma can lead to pain relief, muscle relaxation, and decreased anxiety; however, due to its powerful effects, Soma has been increasingly used as a recreational drug. As with all muscle relaxants, Soma has a very high potential for abuse, leading to a ban on the drug in Norway, Sweden, and Indonesia.

When used with alcohol, a dangerous synergy can result – Soma’s effects are enhanced, making this combination a particularly risky one. If you’re trapped in the cycle of addiction, don’t want to find relief.
Call for help finding the right treatment program for you.

While each drug used alone has its own set of effects, use together can lead to greatly increased risk.

One of the biggest risks associated with concurrent use is the operation of vehicles or machinery. Soma use alone, even within the prescribed dosage, has been shown to negatively affect psychomotor performance, despite no subjective feelings of the effects (Zacny, Paice, & Coalson, 2011).

Because alcohol enhances these psychomotor effects, you may use these drugs together and endanger yourself, believing you feel little to no effects and attempting to drive or perform other tasks.

The combination of the effects of Soma and the effects of alcohol on the GABA receptors reduces overall communication in the brain, leading to similar compounding effects. The symptoms of abuse for each of these drugs are exaggerated by concurrent use, leading to more severe potential consequences.


Signs and Symptoms of Soma Abuse


Signs and Symptoms of Alcohol Abuse

Treatment for co-abuse of Soma and alcohol will vary based on the type of addiction the individual is experiencing.

Soma users may experience both a physical dependence on the drug as well as a psychological dependence. In either case, the patient will typically have at least:

To learn more, check out the following articles:

Also, share your thoughts and questions with others by visiting our Forum today.