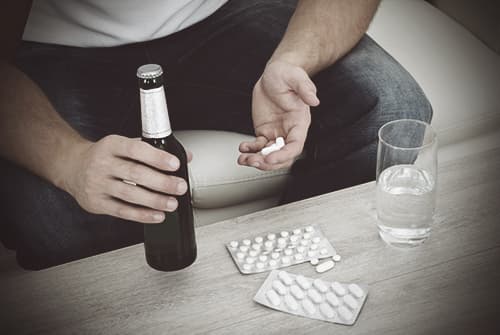 Alcohol and Vicodin can both be harmful to your health, but when used together, the negative effects can build upon each other. Vicodin, which contains hydrocodone and acetaminophen, is a prescription opioid used to manage a number of acute pain issues. Its risks are minimized when taken exactly as prescribed. These risks, however, may skyrocket when the opioid painkiller is misused or abused.

Vicodin, like heroin and other painkillers, can elicit an extremely pleasant euphoria and sense of relaxation in addition to pain relief—this combination of effects lead some to problematic patterns of use and subsequent addiction.

Alcohol is a central nervous system depressant, which means that it slows down brain activity, as well as heart and respiratory rate. Vicodin abuse alone can result in respiratory depression. When combined with alcohol, the effects can potentially be fatal.

Alcohol and Vicodin each have depressant effects on a user’s breathing. When taken together, these effects amplify and increase the risk of overdose. It’s extremely dangerous to mix these substances, even in small doses.

Some common signs and symptoms in a person abusing both alcohol and Vicodin include:

If you are concerned about  concurrent alcohol and Vicodin abuse in yourself or in someone close to you, help is available. Call to discuss treatment options with a caring recovery support advisor.

There are many detrimental effects that can occur when alcohol and Vicodin are used together. Vicodin contains acetaminophen, which can damage the liver when taken in large amounts. Alcohol – also a hepatotoxic agent – lowers the threshold at which acetaminophen toxicity may occurs. Concurrent use of this opioid painkiller and alcohol will increase the risk of liver damage significantly.

Liver toxicity isn’t the only health concern with this potentially deadly combination. The harmful effects of mixing Vicodin and alcohol also include:

These combined effects can be fatal, and each patient reacts differently to the mix of Vicodin and alcohol. Most doctors prescribing Vicodin recommend that their patients avoid alcohol altogether because the potential mix is extremely dangerous to experiment with.

There are several national and local rehab programs for concurrent alcohol and Vicodin addictions. Patients suffering from these addictions may seek help at either an inpatient rehab facility or an outpatient treatment program. These facilities treat patients for a set duration — usually 30, 60 or 90 days.

Patients progress through the programs at their own pace and get the structured help that they need in order to get sober and stay clean. Inpatient rehab programs require that patients reside at the facility location for the duration of treatment. Outpatient programs offer care and therapy during the day but allow the patient to live at home during the course of treatment. An addiction treatment support specialist can help you decide which type of program will work best for you, just give us a call at .

Statistics for Alcohol and Vicodin

Nearly 8% of adolescents from 8th to 12th grade have reportedly abused Vicodin, according to NIDA. With the common perception among young people that prescription drugs like Vicodin aren’t as addictive or dangerous as illegal drugs, teens are particularly at risk for developing an addiction. This is why it is vital that teens be educated on the physical and psychological effects of Vicodin.

Education on the dangers of alcohol abuse is equally paramount. In the United States, alcohol is the most common substance used by teens. The CDC found that more than 4,000 underage deaths are caused by alcohol each year. Among underage people who consume alcohol, 90% of the drinking behaviors are considered binge drinking. Add Vicodin to the mix and young people sharply increase their risk for overdose.

Alcohol and Vicodin abuse continues to be a major issue amongst adolescents despite the known consequences. Teens who drink alcohol are more likely to suffer from interpersonal, school, and social problems, as well as car accidents associated with alcohol consumption. NIDA states that this population is also more likely to abuse other drugs, which increases the chances of adverse or fatal effects.

If you or someone you know is suffering from alcohol or Vicodin abuse, help is available. If you are looking to take those first steps toward getting sober, then give us a call at . You will speak with a treatment support specialist who can help you find the best recovery center for you.

For further reading on alcohol and Vicodin, please see: